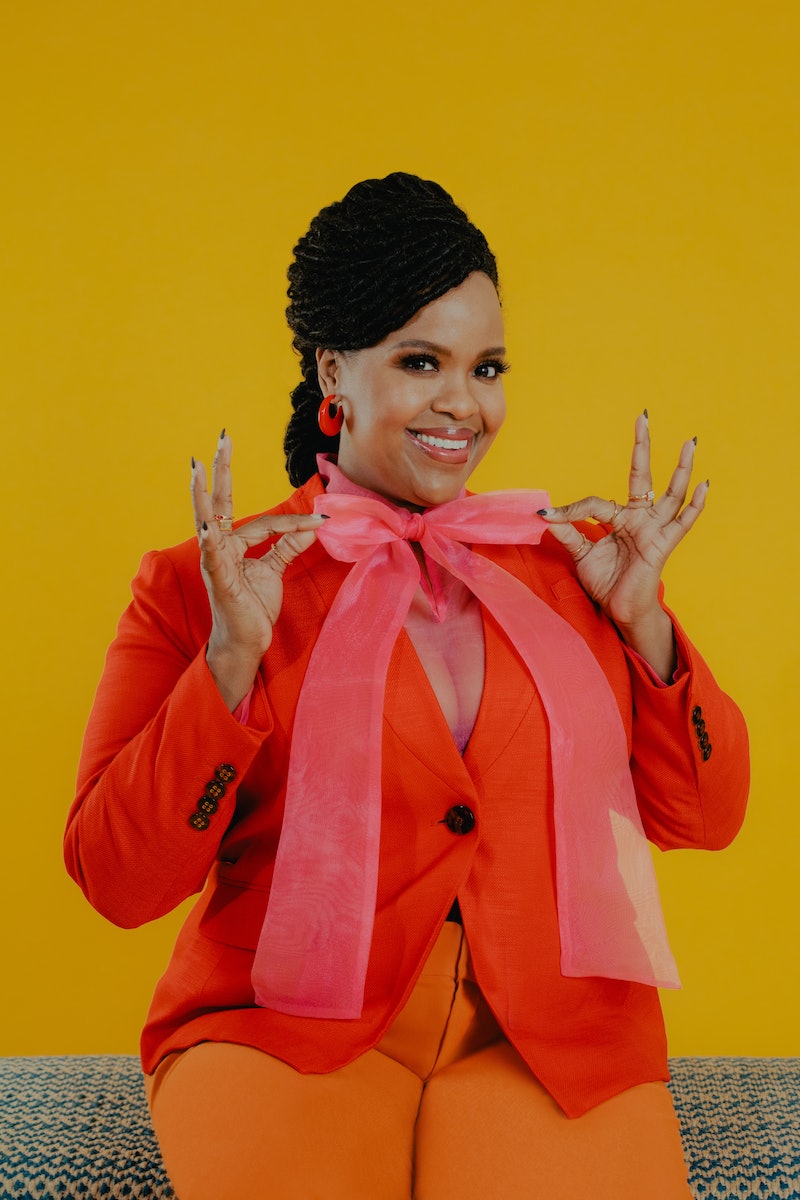 Kelli Prenny got an unfortunate surprise when she arrived at her 10-year college reunion in Insecure’s Season 5 premiere. Believing she was dead, her former classmates had included her in an In Memoriam video. She responded with her usual bit of comedic relief, joking that it might be a “good time to get off the grid” and try out “some other identities.” But as it dawned on her what she was being remembered for — “she had the best Stanky Legg,” “she always carried a purse” — she began to reevaluate her longtime role as the de facto “funny friend.” “Is everything I do a joke to y’all?” she asked her friends, staring out a car window.

It’s a realization star Natasha Rothwell, who plays Kelli, says her character will continue to grapple with throughout the series’ final season. “We’re definitely going to cash the check that we wrote with the premiere, and we’re all asking ourselves as characters on the show what our legacy is going to be,” she tells Bustle.

Rothwell, too, is considering the imprint she wants to leave on the show: she made her directorial debut for the Nov. 28 episode, “Tired, Okay?” which sees Issa trying to focus on her new relationship with Nathan even as her thoughts keep drifting into confrontational daydreams about Lawrence. This marked a stark shift from the episode Rothwell wrote for Season 4, “Lowkey Happy,” which centers entirely on Issa and Lawrence rekindling their romance.

“As a hopeless romantic and a lover of rom-coms, it’s sad to not be in the bubble of that Season 4 episode emotionally, but it’s real life,” Rothwell says of Issa and Lawrence’s evolution. “One of the things I love about this show is the nuanced exploration into Issa understanding her wants and needs ... and that sometimes what you want is not what you need.”

Though Rothwell was hesitant to transition from acting to directing on Insecure, being able to shadow the director of “Lowkey Happy,” Ava Berkofsky, helped her to feel more confident and prepared — as did the encouragement of series creator Issa Rae. Below, Rothwell describes her fears about embracing the next phase of her career, calling on Wonder Woman director Patty Jenkins for advice, and how playing Kelli changed her life.

You’ve described having trepidation about directing for the first time. What was holding you back?

I knew it was something that I wanted to try at some point, but I had doubts in that I didn’t want to direct and have it feel as if it was just a rite of passage. I wanted to earn the respect of the crew and the cast, and not just [have the opportunity] because I’m “in the family.” I didn’t approach directing with the confidence of a mediocre white man. I don’t have that luxury. I have to do my homework, and the adage in diverse circles is that we have to work twice as hard for half as much. So I really wanted to do my homework, and Issa knew that as well.

How did Issa support your foray into directing?

[On “Lowkey Happy”] I was right in the trenches with the director every step of the way on set. It was a capsule episode, and there was a lot of pressure because everyone wanted to see Issa and Lawrence be good together. On the final day of that shoot, I gave Issa a big hug as I was heading out, and she pulled me aside and was like, “You’re ready.” She didn’t even have to tell me what she was talking about. I knew, and I was just like, “OK, throw my hat in for next season and I’m in.” I’m so grateful for her for really seeing me and understanding me and knowing how methodical I am, and giving me the space to do the work that allowed me to show up in a way that made me feel good.

I read that you also reached out to Patty Jenkins for directing advice. Why was she the person you called?

We had bonded on the set of Wonder Woman 1984, and I had such a small role in the film that I wanted to use the opportunity to study her on set and watch her work. It’s such a massive production, and she was like butter — she was so smooth in dealing with the crew. I was just in awe of her, and we bonded over the fact that we’re both military brats who have moved around a ton. I’m definitely guilty of wearing my sweatpants with one leg up, and she does too. I remember walking into rehearsal and we both just looked at each other and were like, “Girl!” Hers was an opinion that mattered to me.

What did she tell you?

My biggest fear was not knowing the technical lingo, and she disabused me of that notion immediately. She was like, “It does not matter! Tell them what you’re trying to do, it’s their job to execute, and just pick it up along the way.” She just really gave me the confidence in myself to make mistakes. I think that’s also part of my personality. I’m very much a perfectionist and she just really said to lean into what you don’t know and lean on the people around you. That was some of the best advice, because I really leaned on every department head during my episode and they were just a wealth of knowledge collectively. I felt like I learned so much, and I don’t think I would have been able to do that if I wasn’t open to that and humbled myself in the process. I’m super grateful for her.

Did you get to speak to Kerry Washington, who directed the episode before yours?

Our paths crossed when we were shooting on the same set, and there were hugs and love for sure, but I didn’t get a chance to pick her brain as much as I wanted to because she was in the thick of directing her episode. I am a student of behavior, so I tried to watch as many of Kerry’s takes as possible. I did the same thing when Regina King directed in previous seasons. This is how much of a weirdo I am: I noticed when Regina was directing, she was wearing flight suits every day, and she looked so badass. So I wore a flight suit every day I directed. It was like going to war. You zip up, you go, and you’ve got enough pockets for all your sh*t. The amount of Black female talent that Issa brings onto the set is truly an embarrassment of riches. I feel so lucky to have the blueprint for what I’m looking to do right in front of me.

How did your close relationships with the cast affect the directing process? It must have been a unique experience to direct your boss in a sex scene.

In the moment, I think what really benefited me was that I’m an actor. I know what it’s like to be vulnerable and want to feel cared for in those moments of extreme vulnerability, emotionally and physically. So that was my entry point, and it wasn’t until I was working on it during the editing process that I was like OK, this is unique. But I knew that I had Issa’s trust from the moment she said “you’re ready” and even before then. I just felt so comfortable behind the camera. It was sort of this mutual elevation of me looking at the monitor and using a different paintbrush to tell a story. I think my costars were excited to see me in that light, and I was excited about seeing them from that perspective as well.

Although Kelli wasn’t in Episode 6, she’s still dealing with some identity issues about being boxed in as the “funny friend.” How will that play out heading into the final episodes?

In my very biased opinion, Kelli is one of the most together friends of their friend group. She doesn’t have boy drama or work drama, she’s happy, she’s figured out her life, she’s figured out balance, she can turn up and turn in a sales report. She’s got it pretty figured out. We’ll see that introspection. I don’t want to say more than that because I don’t want to ruin it, but I think it causes her to see the world as much bigger than she might have seen it before. You’ll definitely see her perspective shift.

Fans are already campaigning for a Kelli spinoff. What’s your reaction to that? Would you be game?

I mean, of course! I don’t think it’s in the cards, but never say never. I’ve loved living in her body for the last five seasons, and I’m a better person for it. Her courage and bravery and irreverence and self-confidence and never once in her entire existence doubting her worth or her value or the importance of her voice, that sh*t rubs off on you when you do that for five seasons. I’m thankful for her, and I would not say no at all to seeing what lies next for her, but I’m excited to see what other characters I can bring to life that can be just as impactful for the world and for me as well.

Insecure has undoubtedly been a life-changing experience for you. What will you remember the most from the past five seasons?

Everything. In no uncertain terms, this show has changed my life. Professionally, personally, it is textbook game-changer sh*t. I think the biggest thing I’ll carry with me are the relationships, honestly. I moved to LA and I don’t have family in LA, so this writers’ room was my first home, and it was a place where I felt creatively safe and seen. It’s hard to say one thing, and it’s particularly difficult because I’m still in denial. I’m trying to live up to Kelli’s “growth” GIF. The growth I’ve gotten from the show is allowing the career I’m having right now to be.