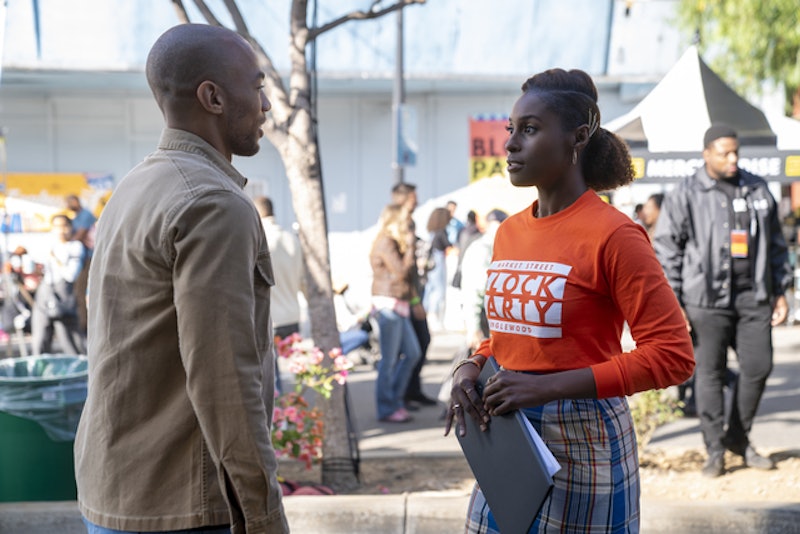 Years after their painful breakup, Issa (Issa Rae) and Lawrence (Jay Ellis) finally reignited their old flame in Insecure’s Season 4 finale. But their happy reunion was short-lived: Not only did Lawrence receive a job offer nearly 400 miles away in San Francisco, he learned that his ex Condola (Christina Elmore) is pregnant with his child. This naturally left his relationship with Issa up in the air, leading some fans to predict that Issa could end up with Nathan (Kendrick Sampson) at the end of the series instead.

“I think we’re trying one of the questions that’s still sort of hanging from this: The Issa-Lawrence, Issa-Nathan [relationships],” showrunner Prentice Penny teased to Entertainment Weekly in June 2020.

Premiering on Oct. 24, Insecure’s fifth and final season sees Lawrence very much conflicted. “We found ourself towards the end of Season 4 in this really beautiful place, and now there’s some things that he has to figure out,” Ellis hinted in an HBO promo video. In a recent EW cover story, the actor also shared that fatherhood will allow Lawrence to “come out of his cocoon” and realize “what it means to be a father [versus] what his vision of being a father was.”

In the same interview, Rae suggested Issa and Lawrence may be able to move past these complicating factors. “Issa and Lawrence got to this really great place — and are you really going to let one baby stop a show?” she said, admitting that Ellis’ character wasn’t meant to last this long when the series premiered in 2016.

However, there’s still clearly a connection between Issa and Nathan, who returned in Season 4 after seemingly ghosting Issa. He explained that he’d actually gone to seek treatment for bipolar disorder, but Issa — having recently reunited with Lawrence — kept him in the friend zone. If she and Lawrence part ways, it could re-open the door to romance, and there have been clues that the show will take that route. In February, photos surfaced of Rae and Sampson on Insecure’s Los Angeles set, including shots of their characters cuddling and laughing.

“I definitely didn’t expect a lot of the things that they wrote in this new season,” Sampson told Mic. “I don’t think it will be what people expect.”

Hey, even Y'lan Noel’s Daniel could still have a shot at this point.

More like this
IRL ‘Staircase’ Characters Todd & Clay Peterson Still Think Their Dad Is Innocent
By Gretchen Smail and Rebecca Patton
Kim Cattrall Spilled All The Tea About Not Being In The 'Sex And The City' Reboot
By Radhika Menon
The Time Traveler’s Wife Book Has A Heartbreaking Ending
By K.W. Colyard
All The Theories About Kathleen Peterson’s Death
By Morgan Leigh Davies
Get Even More From Bustle — Sign Up For The Newsletter