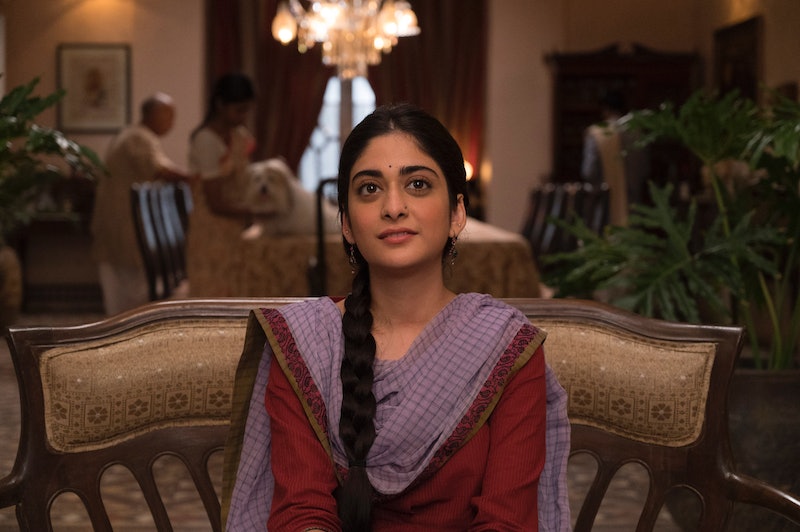 Set against the backdrop of India’s newfound independence, the BBC's A Suitable Boy follows the story of university student Lata, whose traditional mother begins to search for an ideal husband on her behalf. Featuring an all-Indian cast, the series also sheds light on the country's rich culture and history. But is A Suitable Boy based on a true story?

As Bustle has previously reported, the six-part BBC drama is based on Vikram Seth's best-selling novel of the same name. First published back in 1993, the book is recognised as one of the longest novels to ever be published in the English language, with a staggering 1,349 pages. The novel's storyline follows a young woman from a traditional Hindu background in 1950s North India, and although the plot is primarily fictional, A Suitable Boy is set shortly after a real-life and highly significant period of history: the Partition of India.

The Partition of India took place in 1947, when the British departed India after ruling there since the 1700s. The area was then split into two independent nations: a majority-Hindu India and a majority-Muslim Pakistan. This separation led to the displacement of around 11 million people, which in turn brought on a major refugee crisis. The devastating consequences of the Partition was also experienced in the division of the British Indian Army and the Royal Indian Navy, which led to a horrendous mutual genocide.

As the Radio Times reports, the series is set shortly after the Partition in 1951, a time when the people of India were gearing up for the country's first general election. Religious tensions and divisions which flared during this turbulent era are touched upon throughout the story, seen especially in the romance between protagonist Lata and fellow university student Kabir as they hail from opposing religious and cultural backgrounds.

During a recent interview, Indian acting newcomer Tanya Maniktala, who portrays the lead character of Lata in the television adaptation, discussed the difficulties her own family had faced while living through the Partition, revealing how her Hindu great-uncle was forced to prove his religious beliefs. "It’s scary to imagine what it would have been like, but yeah, that’s the truth,” she told the Radio Times, adding: “Humanity was lost at that time, it was not about religion. It was humanity that lost all faith.”

Joining Maniktala in the show's cast is Bollywood legend Ishaan Khatter as the hedonistic Maan as well as Tabu, who played Gita Patel in 2012's Life of Pi, and many more esteemed actors.

A Suitable Boy currently airs on Sundays at 9 p.m. on BBC One.