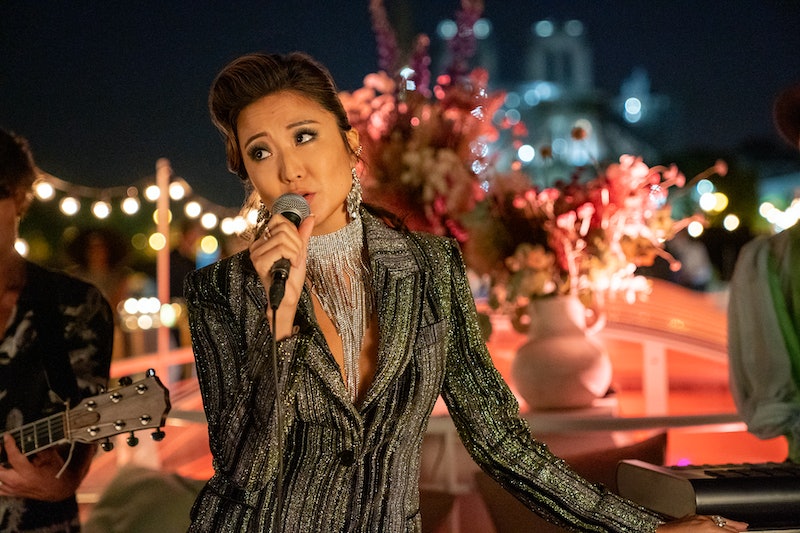 Mindy Chen, Emily’s BFF and roommate, strikes out on her own in Emily in Paris Season 2. Played by Ashley Park, Mindy started as an heiress-turned-nanny from Shanghai. But she later revealed that she was actually running from her life after a failed stint on a popular Chinese talent show that left her afraid to sing again. With Emily’s encouragement, Mindy reignited her passion. By the end of Season 1, she had landed an emcee job at a drag bar (which got her fired from her nanny gig, hence the new roommate situation). Now, Season 2 sees Mindy having to prove herself worthy of working there — leading to a high-energy performance of BTS’ “Dynamite” in Episode 1.

Ashley Park really is singing on Emily in Paris and she’s no stranger to the stage, as she explained to Vanity Fair. In fact, she’s an acclaimed performer with serious credentials. “I’ve sung my whole life and performed in so many musicals, but I was always trying to figure out what my actual, true voice was,” she told the magazine. Park has starred in a number of Broadway musicals like The King and I, Mamma Mia!, Sunday in the Park With George, and Mean Girls, for which she was nominated for a Tony Award for her performance as Gretchen Wieners.

While we can expect to see Mindy singing more throughout Season 2, she performed just two songs in Season 1: Sia’s “Chandelier” and Édith Piaf’s “La Vie en Rose,” which marked the first time she sang in front of Emily. “La Vie en Rose,” in particular, quickly became a hit among fans — a fact that surprised Park.

“A lot of people were like, ‘Where is the recording of this? Why can’t we download it?’ I was like, ‘Well, it is a one-minute a cappella version that she’s just singing in a park. I don’t think you would want a recording of that,’” she told Vanity Fair.

But Park ended up recording her own version of “La Vie en Rose” for Spotify anyway, and then filmed a music video of it with the help of Emily in Paris producer Shihan Fey.

Mindy’s whole character arc was written with her musical background in mind, Park told Vulture in October 2020. “[Creator] Darren [Star] called me after the first table read, and they hadn’t written anything past episode three yet. He’d seen me in Mean Girls on Broadway and asked if I’d mind if they wrote in some singing for Mindy,” she said. “We talked about how we would want it to be story driven and not just singing for the singing. So a lot of that backstory developed after the casting and is still in development, you know? The thing that was written from the beginning is that Mindy is an heiress, and to be the only child of a very wealthy family in any country, from any culture, is a lot of pressure.”

And Park teased to Vogue in December 2021 that we can only expect more fantastic renditions from here. “I couldn’t believe we got the rights to ‘Dynamite’ by BTS. My favorite thing to do is interpret songs that are well-known and make them my own,” she said. “I was like, ‘I love Celine Dion more than anything,’ and they let me sing a Celine Dion song and an old Broadway standard, ‘Diamonds Are a Girl’s Best Friend.’ It was so fun to do a variety of songs because I had no idea that when I was cast that Mindy would even sing.”