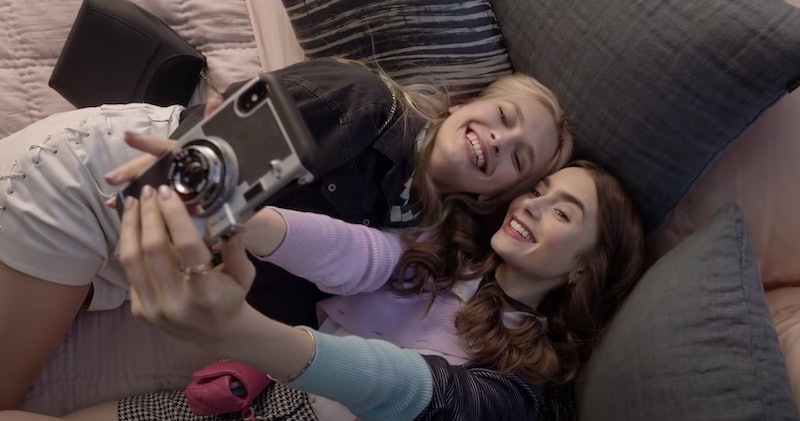 Love it or hate it, Emily in Paris is returning for Season 2. Though the series — which follows American Emily Cooper (Lily Collins) as she blunders through her new life in France — was one of 2020’s most polarizing shows, that didn’t stop everyone from begrudgingly tuning in. Netflix subscribers watched 676 million minutes in its first week, according to Nielsen.

The show’s popularity prompted Netflix to renew it for a second season on Nov. 11, 2020, just a month after its Season 1 premiere. The company delivered the news via a cheeky letter from Emily’s boss Sylvie. “We hope that by extending her time in Paris, Emily will further the relationships she has already made, delve deeper into our culture, and perhaps pick up a few words of basic French,” the letter reads. Until then, here’s everything we know about Emily in Paris Season 2 so far.

Netflix announced at its Sept. 25 Tudum event that the Emmy-nominated comedy will return on Dec. 22. The teaser also featured footage from the upcoming season, showing Emily continuing her glamourous adventures. If escapism is what you loved in Season 1, it looks like Season 2 won’t disappoint.

The streaming platform previously shared that production on Season 2 had begun on May 3, 2021, via another pseudo memo from Sylvie on the show’s Instagram page. “We are writing to inform you that Emily Cooper’s new work permit has been approved with a start date of May 3, 2021,” the message read. “As per our prior correspondence, she is an asset to Savoir and we hope she continues to have impact with our clients who are very particular about the results they expect from their agency.”

The second season was filmed in Paris, Saint-Tropez, and three other French locations. Per People, it wrapped production in August 2021. “We just can’t even believe that we got to go back to Paris and we actually finished filming the whole season,” said star Ashley Park, who plays Mindy. “We were going into a country that was still on lockdown. I think we were just happy that we finished the second season, everybody was safe and we finished the entire thing.”

The Emily In Paris Season 2 Cast

Based on the November Emily in Paris Season 2 teaser trailer, we can expect all the usual characters to return. Mindy, in particular, will likely have more of a central role after moving in with Emily in the finale. “Any excuse to see more of Mindy, I am all for,” creator Darren Star told Glamour.

As Emily slowly gains the begrudging respect of her co-workers, she’ll also likely bond more with Sylvie (Philippine Leroy-Beaulieu), Julien (Samuel Arnold), and Luc (Bruno Gouery). Finally, chef Gabriel (Lucas Bravo) and his now ex-girlfriend Camille (Camille Razat) will undoubtedly be central to Season 2. Gabriel initially broke up with Camille and hooked up with Emily before leaving town, but a late investment from Emily’s love interest Antoine (William Abadie) allowed Gabriel to stay permanently in Paris. He may now have his own restaurant, but his love triangle just got messier — especially since Antoine has officially been promoted from recurring character to series regular for Season 2, per TVLine.

On May 24, TVLine also reported that Emily will have a new love interest in Season 2 played by Lucien Laviscount (Katy Keene, Scream Queens). The actor will play Alfie, a cynical, snarky, yet charming American man who refuses to learn the French language or dive deep into the nation’s culture. The two have an “antagonist relationship” that becomes romantic by the end of Season 2, according to the outlet.

Set to appear as guest stars in Season 2 are actor-playwright Jeremy O. Harris and French actor Arnaud Binard. Harris, who wrote the Tony-nominated Slave Play and the A24 film Zola, will play Gregory Elliott Dupree, a well-known fashion designer and the former apprentice of Pierre Cadault (Jean-Chrostophe Bouvet). Known to travel with luxurious clothes and a collection of beautiful men in tow, Gregory boasts over-the-top style, an extravagant personality, and a bitter feud with ex-mentor Pierre that began after he dramatically quit working with him.

Following a career mainly in French television, Binard will appear on Emily in Paris as an endearing, sociable Saint-Tropez nightclub owner named Laurent G, whom TVLine describes as “a party boy who never grew up.” In Season 2, Laurent offers to promote one of Emily’s brands, but she then learns his relationship to Savoir is “more complicated than marketing.”

The Emily In Paris Season 2 Plot

Emily was lampooned all over the internet for being an ignorant American, and Star told E! News that we’ll see her grow in Season 2. “I think Emily has some surprising tough choices,” he said. “The show’s so much about the culture undermining her expectations of how things are and how things seem. And everything will not be as it seems. It’s always about challenging her American worldview. We certainly have a lot of forks in the road and a lot of places to go.”

While Season 2 will likely include at least one cultural faux pas, Star said that Emily won’t be a complete fish out of water this time around. “She’s going to be more of a part of the fabric of the world she’s living in,” he told Oprah magazine. “She’ll be more of a resident of the city. She’ll have her feet on the ground a little more. She’s making a life there.”

Could Emily in Paris Season 2 include... a throuple? During an interview with Cosmopolitan, star Lucas Bravo hinted that all those curious looks between Emily and Camille were purposeful. “When [Camille] kisses Emily on the mouth and she’s like, ‘I’m not sorry.’ And then when [Camille and Emily are] in bed, and [Gabriel likes] the picture, it’s all little seeds,” he said. “Anything could happen between the three of them. I think Darren wants this second season to be really open-minded.”

Collins said something similar in a Vogue UK interview. “There are tons of little moments where you’re like, ‘...Does Camille like Emily?’ You can’t really get a vibe, and I feel like that ambiguity is what keeps Emily intrigued,” she said. “I think anyone in that position would be like, you’re my friend, but now I have this romantic connection [with Gabriel], and I don’t want to hurt you, but… Oh my God! So, you know what, it’s really confusing. I feel like the next season will only create more love triangle drama.”

The Emily In Paris Season 2 Trailer

Netflix debuted a first-look teaser (above) on Sept. 25, along with the premiere date. In the 30-second clip, Emily is seen taking in all of the luxe, Instagrammable sights the south of France has to offer before her best pals join her poolside. “No, I’ll post it later,” she tells them. “I’m on vacation.”

The official full-length trailer for Season 2 was released on Nov. 18, and it shows Emily fully diving in and experiencing everything Paris has to offer, even if that means making a bunch of mistakes that will polarize the internet.

More like this
The ‘Emily In Paris’ Season 3 Release Date Is Here, Plus The First Footage
By Bustle Staff
Here's When 'The Crown' Season 5 Will Premiere — And What To Expect
By Bustle Editors
Netflix's 'Bling Empire' Season 3 Trailer Includes A 'Selling Sunset' Cameo
By Kadin Burnett and Sam Ramsden
Ralph Macchio Says Some 'Cobra Kai' Season 6 Scenes Have Already Been Filmed
By Brad Witter
Get Even More From Bustle — Sign Up For The Newsletter