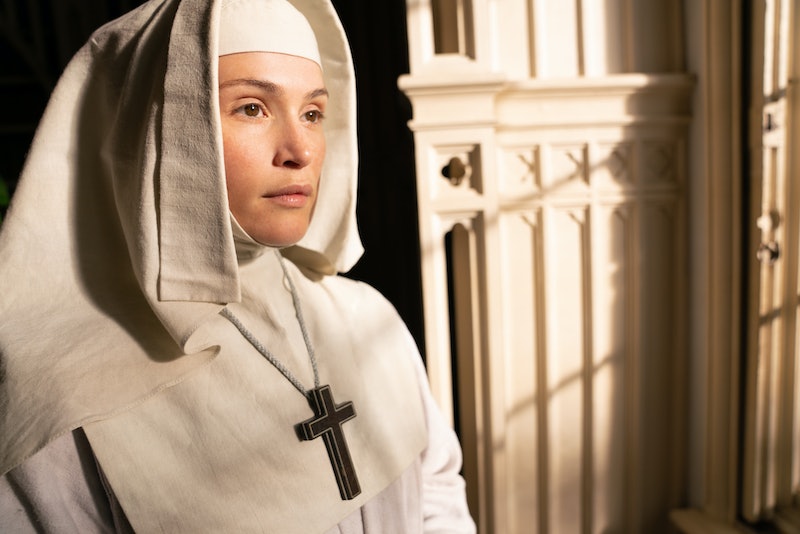 BBC’s adaptation of Black Narcissus sees Gemma Arterton take on the role of Sister Clodagh, a nun who attempts to breathe life into a remote palace in the Himalayan mountains. It’s not long until Clodagh starts to feel the effects of isolation and sexual repression, which culminates in one hell of a psychological thriller. So, is Black Narcissus based on a true story?

Adapted from Rumer Godden’s 1939 book of the same name, Black Narcissus is an entirely fictional story. However, Godden did draw upon some of her own experiences when she wrote it. Godden spent the majority of her childhood and young adult life growing up in Southeast Asia, and according to Early Bird Books, Black Narcissus specifically draws on her “time in India and her experiences with the Catholic church”.

As the Guardian notes, during her career as a writer Godden mixed and recast the various elements throughout her stories to highlight their significance, but always related “her work back to the people, places, human passions, and frailties that she knew and understood best.”

While Godden’s portrayal of nuns and Catholicism in Black Narcissus are mainly inspired by watching them from afar, there are two aspects of the story that are based on real life. The first is its title, which is named after a perfume by Caron called Narcisse Noir, and is also the name of the aftershave the young prince Sabu wears. Released in 1911, the floral scent is still available to buy today and described by the perfumer as "timelessly captivating" with "fatally seductive notes".

The other strand of the story rooted in truth is its ending. Spoiler warning for those who haven’t read the book or watched the series yet, but the lonely grave was one that Godden took from a real burial place. There’s not much else to go on in terms of detail, the specifics of where and when remain a mystery, but it's a detail that certainly aligns with Godden’s ability to seamlessly weave her own experiences into her work.

It's that same spirit that Amanda Coe aimed to capture in her adaptation of the story, as well as ensuring it was entirely different from the 1946 film. “In the film, you get the white colonial gaze in an unquestioned way, but the book is much more interesting than that,” Coe explained, speaking to news site The I. “Rumer Godden grew up in British India and was very interested in the colonial legacy on the Indian characters. We’ve modernised it in a way that makes it acceptable to modern audiences.”