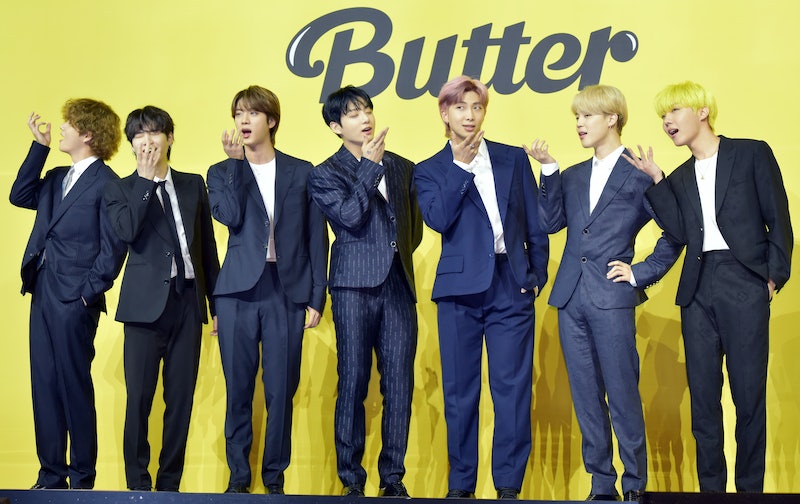 The Chosunilbo JNS/ImaZinS/Getty Images
By Hugh McIntyre
May 27, 2021

Whenever BTS releases a new single, the world perks up and pays attention — but their latest release sounds and feels especially special. The group’s “Butter” arrives just in time to compete for one of the most coveted titles in the American music industry, and while it’s only been out for a few days, there’s plenty of reason to believe it may wind up winning the song of the Summer honor when the weather turns once again.

“We want to have a blast with everyone this summer,” BTS frontman RM told Bustle in a recent interview. Fellow bandmate Jin added that in creating “Butter,” the group wanted to create something “brimming with bright and positive energy.”

Summer hasn’t even officially started yet, but people everywhere are acting as if it has, and for good reason. With vaccines readily available across the U.S. to almost everyone, millions of people are now able to see friends and family and celebrate making it through perhaps the toughest year of their lives. A global pandemic is finally coming to a close, and this is the time for everyone to enjoy themselves and do all those things they haven’t been able to do safely for more than a year. That includes vacations, parties, road trips, and going out to bars and clubs. That said, all of those activities are often soundtracked by the biggest hits of the season.

BTS’s “Butter” is on track to not only be a smash on the charts, but a hit that defines one of the most important summers in a long, long time. The South Korean septet’s track was predicted to be a major win before anyone had heard it, and now that it’s here, it’s clear it will soon become just that. The electro/disco cut is a slice of power-pop perfection, and the average person doesn’t even need one full listen for it to become stuck in their head. The band’s latest was created to appeal to the largest audience and stick with the masses, and it does what it’s supposed to brilliantly.

Between ultra-slick production, impressive high notes, and even a rapped verse that brings the audience in to sing along, “Butter” has all the makings of the song of the summer, which is both a proper honor handed down by Billboard every year after Labor Day and a title given to many different tracks by the public. Essentially, the song of the summer is a single (or singles) that people immediately associate with the season when they hear it, even years later. “Butter” may join the ranks of recent song of the summer title holders such as “One Dance,” “Despacito,” "Cheerleader, “Fancy,” and “Call Me Maybe.” These are tunes that were inescapable.

“Butter” is likely headed right for No. 1 on Billboard’s Hot 100 chart, thanks to what will surely be an incredible first-week showing. The song is making history on streaming platforms, on YouTube, and it’s already picking up steam on radio stations across the country. Radio plays a big role in identifying the song of the summer, as it’s important for any track to be played non-stop during car rides and to reach millions who opt not to focus their listening habits on websites like Apple Music and Spotify.

BTS’s latest single, which so far is a standalone release, exudes the joy that summer typically brings out in people, and it’s the song that so many needed this year. After months of staying inside and worrying about health and safety, summer 2021 demanded something special, and the K-pop powerhouses delivered. They created a great pop track that encapsulates a once-in-a-generation energy that’s floating around in the air, and the track dropped at the absolute perfect time to dominate the charts and stick in people’s minds and hearts for weeks, months, and years to come.