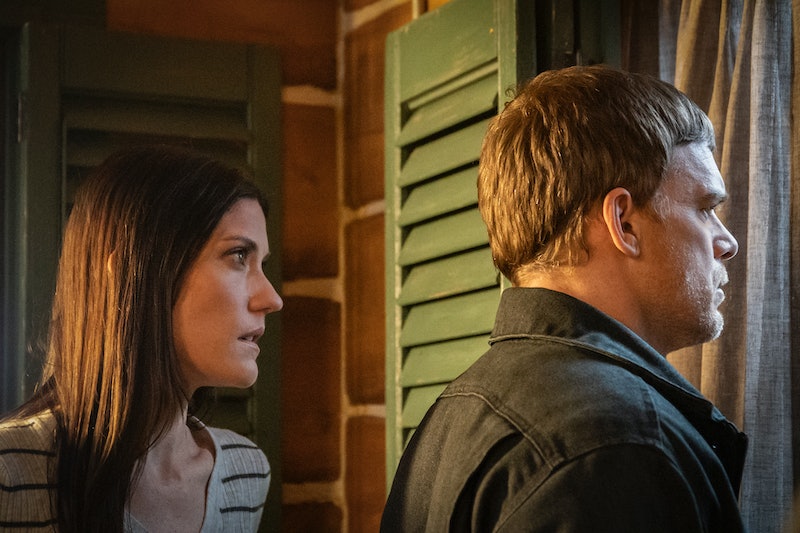 It’s almost impossible to imagine Dexter without Deb. Her relationship to her brother was critical to the success of the show, helping to humanize him even as he used his warped sense of ethics to justify killing people. She also went through her own share of trials, struggling with the emergence of romantic feelings for her adopted brother, finding out that Dexter was a serial killer, and having to shoot her boss Lieutenant LaGuerta to protect him.

Deb’s death in the series finale at the hands of Dexter’s final adversary Oliver Saxon, aka the Brain Surgeon, would seem to rule out her appearance in the upcoming Dexter revival New Blood. But that isn’t the case. The trailer for the Showtime miniseries reveals that Deb has essentially taken over the role of Dexter’s late father Harry, who haunted his son throughout the original show despite having died well before the events of the series. It remains to be seen if Harry himself will also appear in New Blood, but for now, it seems like the manifestation of Dexter’s consciousness has (perhaps permanently?) taken on the form of Deb, who hovers over Dexter’s shoulder admonishing him for not having learned anything from his various misdeeds over the years.

It remains disappointing that Deb is dead and unable to live a life of her own or interact with Dexter in any real way, but this is at least a convenient way to keep Jennifer Carpenter on the show. The actor — and her portrayal of the foul-mouthed but loyal and loving Deb — was such a steadfast and enjoyable presence in the original series that it will be nice to welcome her back in any form. And hopefully the fact that Deb is still lingering in Dexter’s mind means he’s holding on to his humanity and the positive influence she had on him, even now that she’s gone.

Still, don’t expect Deb to be a passive passenger in Dexter’s psyche. “I feel like sometimes the Dark Passenger ... is almost directly behind the wheel, and it was an opportunity not to be an angel or devil on his shoulder, but to jerk the wheel to the left or right against his will. And to manipulate him, to navigate him, to abuse him, to save him,” Carpenter said during New Blood’s panel at the Television Critics Association press tour in August, as reported by Deadline. “I felt like it was something entirely different than some sort of ghost entity.”

To what extent can Deb’s memory really control Dexter’s dark impulses? Will she be able to keep his murderous tendencies in check, or is Dexter destined to be a killer no matter what? The events of Dexter: New Blood will put that question to the test.