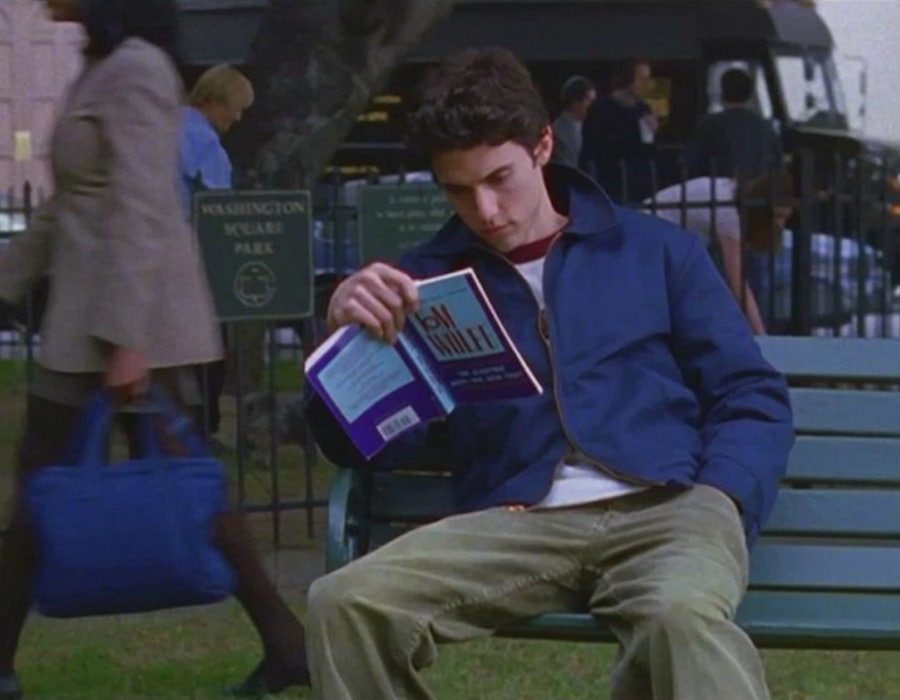 Almost 20 years ago, Jess Mariano reluctantly stepped off a bus in Stars Hollow and introduced a nation of bookish girls to the joys of “having sexual feelings for some dude.” Jess was hot, literary, and emotionally unavailable: a perfect combination for girls who wanted a crush who could talk about books but who wouldn’t be so clingy he’d distract you from your homework. I didn’t watch Gilmore Girls when it came out (too much homework) but when I finally did, I liked Jess so much that after learning he and Rory would eventually break up, I gave up on the show. What’s the point of a world without Jess in it?

I hadn’t given Jess another thought until this past summer when, in anticipation of Gilmore Girls’ 20th anniversary, I decided to revisit the Jess episodes and read five of the books he reads, defends, or recommends. As I read more books by white men in a row than I have since 2009 — and explained to friends and strangers why I was subjecting myself to My Struggle — a stunning variety of women and men confessed to me that Jess was their sexual awakening. It was a lot of romantic pressure on one imaginary teen. Was Jess really the literary dreamboat we all remembered? Read on to find out.

When Rory first asks Jess if he likes to read, he denies it, presumably for toxic masculinity reasons. He refuses Rory’s offer when she tells him he can borrow her copy of Allen Ginsberg’s classic beat poetry collection Howl, choosing instead to steal it and to return it to her later, filled with marginalia.

The posturing, the unnecessary subterfuge, and the sleight of hand magic Jess demonstrates just before returning the book to Rory all seem tiresome now. But there's something thrilling about the idea of reading margin notes a hot guy has written specifically for you. Howl inaugurates Rory and Jess’ exchange of books, ideas, and ideas about books as flirtation. It’s the perfect book to begin their relationship, since Ginsberg has strong “horny teen with an unrequited crush” energy. Jess says he has read Howl “about 40 times,” telling us that he’s a serious reader and a bit obsessive. As I re-read my own copy, I was embarrassed by my puerile annotations and wondered if Jess, too, had stolen Rory’s copy to simply underline “alcohol and cock and endless balls”? (It’s hard to read about men “scattering their semen freely to whomever come who may” and not be frankly shocked that Rory has read the word “semen.”) Though — and this is the beauty of Jess — I could just as easily imagine him underlining “we’re all golden sunflowers inside.”

Howl is, ultimately, exactly the kind of book a white teen boy would read. This, I quickly realized, was true of all of Jess’ reading choices.

Storm for the Living and the Dead by Charles Bukowski

Abrasive feminist icon Paris Geller took the words out of my mouth in the episode where she reads Jess to filth for his literary taste. She argues that he's a typical guy: “Worship Kerouac and Bukowski. God forbid you pick up anything by Jane Austen.”

“Hey, I’ve read Jane Austen,” Jess responds. “And I think she would have liked Bukowski.”

Jess' love of Bukowski’s Storm for the Living and the Dead did not romantically endear me to him, either. One of the hard-won lessons of my twenties is that reading poetry does not make a man good. In fact, some of the worst men I’ve met read poetry and even write it. I have started to believe that what makes literary men attractive is their desire to learn about and empathize with people unlike themselves. As such, it’s not exactly hot that Jess Mariano almost exclusively reads books about people who look like him.

Of course, Jess isn't alone in his bad literary taste. Rory is reading those same books, plus even worse ones. She champions The Fountainhead and makes Jess read it. (If we as a culture have learned anything since Gilmore Girls Season 2, it should be not to kiss anyone who tells you to read Ayn Rand.) In a later season, Rory tells her Yale interviewer to ignore the Oprah seal on the cover of a book she has recommended, because “It’s actually very good!” Essentially parroting Jonathan Franzen, a man who is proof positive that “liking books” does not make you a better person.

But Bukowski is funny, insightful, and a terrific poet: I think Jess is right to enjoy him. As I read Bukowski’s descriptions of pulling over to puke while driving drunk, I could imagine that for teenage Jess, this life would sound more interesting than going to school at 7 a.m. I think Jess might even be right that Austen would like Bukowski, though I also think she would constantly dunk on him without him knowing.

Please Kill Me by Legs McNeil and Gillian McCain

Please Kill Me is an oral history of punk that Jess recommends to Rory while she's tutoring him, as a method of distraction. While I do not particularly like punk music, I loved it. Over the course of the book, every single person in the entire punk community eventually gets stabbed, which I’m sorry to say, is extremely funny to me. And I loved reading about how Patti Smith was corny in the years before she became an icon and my artistic hero. It made me feel like anything is possible for me, a corny person.

My enjoyment was tempered by the abhorrent politics of so many people involved in punk. According to Please Kill Me, the artists in the community were almost exclusively white, and a truly stunning number of them were into Nazi iconography. As the book details, Ron Asheton from The Stooges wore Nazi clothing and decorated his room with memorabilia; Dee Dee Ramone was enamored with Nazi relics while growing up in Germany; the first thing Sid Vicious did after getting out of jail when Nancy Spungen was murdered was put on a swastika t-shirt. When I played The Stooges on Spotify after a reading session it autoplayed a US Drill sergeant recording next, which felt correct.

While Jess is clearly not a neo-Nazi, I don’t think there’s anything particularly romantic about idolizing Nazi-obsessed men who slept with 13-year-olds and don’t know how to play their guitar. He loses points for this one.

Othello is a book that Jess avoids, so I read it in its entirety to prove that I am morally and intellectually superior to an imaginary 17-year-old. After Jess fails to derail his and Rory’s study session by recommending Please Kill Me, he later succeeds by suggesting he and Rory get in her car to go get ice cream. Rory compromises by telling Jess she’ll read him Othello as he drives.

While we never see this actually happen — since Jess almost immediately crashes Rory’s car — it’s clear why Othello is the play Gilmore Girls chose to reference in this scene. Othello is all about jealousy, and up until now Rory and Jess have been illicitly flirting, as Rory is still in a relationship with Dean. Othello obsesses over a handkerchief he gave to his wife Desdemona that he thinks she has given to a lover. And as Rory’s feelings for Jess grow, Dean also obsesses over a bracelet he gave to Rory, which she lost.

There are lessons to be learned from Othello that could have benefited Jess if he had only paid attention. For example: that the line between having a crush and making very bad decisions is quite thin. But it’s likely that reading the play wouldn’t have had any effect on Rory and Jess’ love triangle. I wish it was possible for me to read one book about jealousy and then never act like a nightmare with regards to men again, but I have read thousands of novels and plays and memoirs about relationships and a nightmare I remain.

My Struggle: Book One by Karl Ove Knausgaard

My Struggle is the very last book we see Jess reading, as a hot 30-something in the 2016 revival A Year In The Life. The My Struggle series — which comes in at six books and 3,600 pages — is famous for being, at times, punishingly boring. I don’t see any great artistic achievement in creating boredom in your reader. I don’t need to read a book to become a virtuoso of boredom; growing up in the Midwest already taught me how to do that.

My Struggle is, frankly, the perfect book for Jess Mariano to be reading in 2016. In it, teen Karl Ove decides that doing his homework is shameful and proves that he’s a loser — except for his literature class, because “I associated that with writers and a bohemian lifestyle, besides you couldn’t gut it out, it required something else, a feeling, a natural talent, personality.” He even loves many of the bands mentioned in Please Kill Me, bringing everything full circle and proving that the prop masters on Gilmore Girls are very good at what they do.

Don’t get me wrong: I enjoyed My Struggle. But I was a bit disappointed that this was the kind of book grown, handsome, put-together Jess was reading: a book by another white man, that doesn’t even attempt to delve into other characters’ psyches or exercise any authorial empathy. It’s the logical conclusion of the type of reader teen Jess was, but it would have been more interesting if adult Jess was reading Elena Ferrante. Something that showed he had grown as a person, that he had become interested in people outside himself.

Ultimately, I’m not saying liking any of the books Jess reads makes you a bad person (I like these books!!); I’m just saying they don’t necessarily make Jess the platonic ideal of a crush. Also, I am saying that liking The Fountainhead as much as Rory does make you a bad person. Sorry, Rory. Jess might not be a literary king or a perfect love interest, but Rory is far from perfect herself. My hope for them is that they both end up with a partner who is kind, generous, and hates Ayn Rand. Or someone who might not even like to read at all. Because that's ok, too.