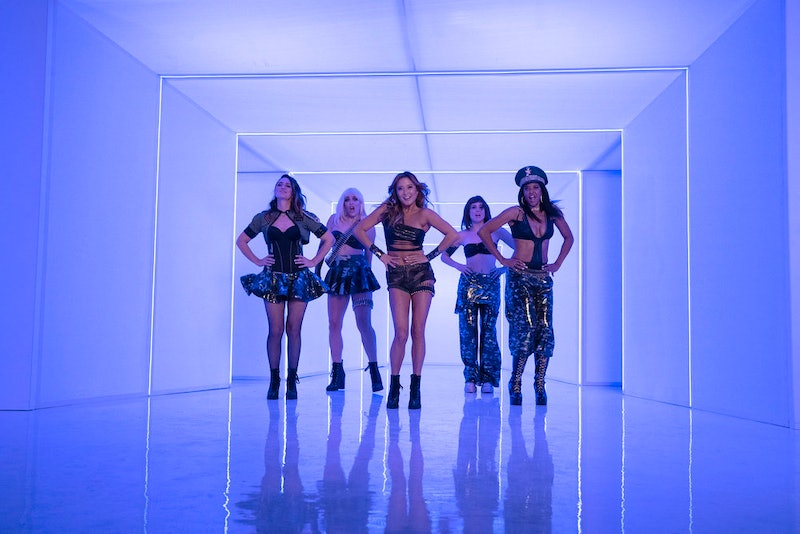 Their songs may immediately transport you back to the late ‘90s, but Girls5eva isn’t based on a real group. However, that’s not to say that the Peacock musical comedy of the same name didn’t draw inspiration from some of the era’s biggest musical acts. Girls5eva stars Sara Bareilles, Renée Elise Goldsberry, Busy Philipps and Paula Pell even performed a rendition of the Spice Girls’ 1996 hit “Wannabe” with Jimmy Fallon and The Roots on the May 5 episode of the Tonight Show.

“Everything is an amalgamation of [turn-of-the-millennium pop music],” Bareilles said in a video conference via the Los Angeles Times. “It’s Spice Girls, it’s Destiny’s Child, En Vogue, Britney Spears. It’s kind of like a pastiche of a kind of genre that I think is even wider than what Girls5eva were doing.” The show’s executive producer and composer Jeff Richmond similarly noted how group members of the era were branded to fit different personality types so fans could be a “Posh Spice” or “Sporty Spice” kind of girl.

Girls5eva creator and showrunner Meredith Scardino explained in the same interview that she and the writers “bought every book that was written” about the era in the late ‘90s, including one by Beyoncé’s father, Matthew Knowles. They also incorporated ABC and MTV’s Making the Band (which spawned such groups as O-Town and Danity Kane), as well as the Lou Pearlman documentary The Boy Band Con into their research.

“The musical style that we’re approaching in Girls5eva is all the stuff from the late 1990s, when girl groups were all the fun of synths [and] dance beats,” Richmond added in a Peacock “Behind the Music” video. “That’s the same kind of thing you’re going to get in Girls5eva.”

Though the Spice Girls do have a reunion tour slated for later this year, the Girls5eva story itself is largely fictional. The titular one-hit wonder ‘90s girl group broke up following a freak accident, but attempts to “give their pop star dreams one more shot” in the present day, after a young rapper named Lil Stinker (Jeremiah Craft) samples their biggest song, “Famous 5eva.” Now in their 40s, the women are comically “balancing spouses, kids, jobs, debt, aging parents, and shoulder pain,” per Peacock’s official description. Actors Andrew Rannells, Erika Henningsen, and Ashley Park round out the cast, while Tina Fey and Robert Carlock also executive produce.

And there’s nothing fictional about that.