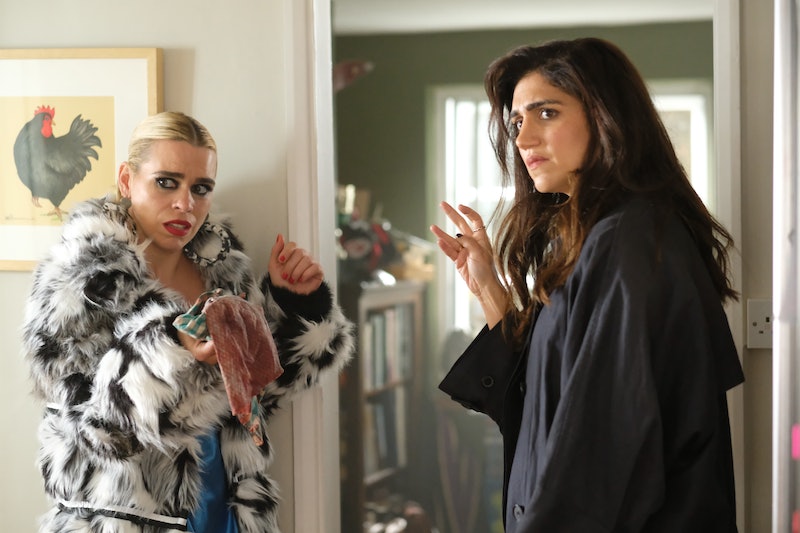 New to Sky Atlantic on Aug. 27, I Hate Suzie stars Billie Piper as Suzie, a 30-something actor going through a bit of a PR drama/career crisis. When her phone being hacked, nude photographs are leaked and Suzie, alongside her manager and best friend Naomi, must deal with the aftermath. But is I Hate Suzie based on a true story?

On the face of it, you'd assume it's kind of based on Piper's own life, seeing as she and Suzie's career trajectory from pop star to actor are pretty much identical. "There are a lot of moments I really wouldn't want people to think were autobiographical," Piper told Radio Times. "The actual narrative is completely made up. The temptation to say, 'That must be autobiographical,' but hopefully people will get over that quickly."

However, she does draw from her personal experience with fame. "I know exactly what it feels like and I'm sure it feeds into my performance," she added. "I'm only coming to terms with a lot of it right now. In my 20s a lot of my stress from that period was buried, and I still struggle to remember a lot of it." Before becoming an actor, Piper was a chart-topping singer at age 15 with her single "Because We Want To."

"I don't regret it," she said. "I love what I do and where I'm at personally. But I certainly wouldn't want my children to go that way. There's an anxiety of me as a child that I probably on some levels smother my children with."

Piper co-created the story with British playwright Lucy Prebble, who she worked with on Secret Diary of a Call Girl. Speaking of the inspiration behind the series, Piper cites "lots of different sources" beyond her own experience. "We talked a lot about Lily Allen, Charlotte Church, Britney Spears," Prebble explained. "People who suddenly became visible and were quite psychologically affected by it. So it's not even Billie we're drawing on, it's looking at it in quite a winking way."

The creators also wanted to highlight the anxieties women feel in their 30s, and how that is completely normal. "One of the things we talked a lot about when creating this was the anxiety over the ways our lives can collapse around us in our 30s," Prebble told Stylist. "It's a crazy time for a woman, I think. You're either saying, 'Oh god I made the wrong decision in my 20s' or, 'Oh god, I didn't make any decisions in my 20s and I should have done'." And for Suzie, that is certainly the case.

I Hate Suzie starts on Sky Atlantic on August 27, and all eight episodes will be available to stream on NowTV.

More like this
Fabien Frankel Has History With 'Game Of Thrones' Emilia Clarke
By Sam Ramsden
Kenneth Branagh Looks & Sounds *Exactly* Like Boris Johnson In 'This England'
By L'Oréal Blackett, Rachel Mantock and Sam Ramsden
The Office Lego Set Includes All Your Favourite Dunder Mifflin Characters
By Sam Ramsden
'The Tower' Season 2 Will Grip Viewers With A Major Twist
By Sophie McEvoy and Rachel Mantock
Get The Very Best Of Bustle/UK