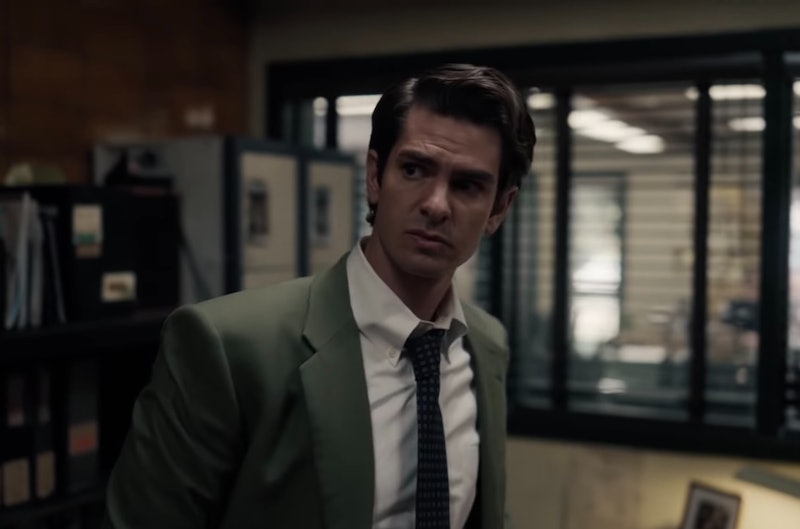 Though the 1984 double murder at the center of FX’s Under the Banner of Heaven is real, the small-town detective leading the investigation — Andrew Garfield’s Jeb Pyre character— is “an invention” of series creator Dustin Lance Black. As Garfield explained to reporters during a March 29 Television Critics Association Zoom panel, Jeb was added to “help frame this very tragic true crime story,” which he further described as a “pursuit of the truth in the face of potential loss of one’s family, one’s social structure, one’s life.”

That’s because Jeb starts the series as a devout member of the LDS Church in Utah’s Salt Lake Valley before he’s ultimately forced to examine his Mormon faith while investigating the murder of Brenda Lafferty (Daisy Edgar-Jones) and her baby daughter. Based on Jon Krakauer’s 2003 nonfiction book Under the Banner of Heaven: A Story of Violent Faith, the FX on Hulu limited series follows the detective down a rabbit hole of disturbing details about Mormon fundamentalist groups in Utah, such as the Fundamentalist Church of Jesus Christ of Latter-Day Saints (FLDS). The real-life victim’s brothers-in-law, Ron and Dan Lafferty, were convicted of murdering her and her 15-month-old daughter, after claiming that God had directed the killings.

“I loved the book when it first came out 10 years ago, I kind of gobbled it up. The themes are so interesting to me,” Garfield recently told Variety, adding that his “very understated” character acts as “the audience’s eyes” in a way. “Not flashy, a very solid dude, and internal. I wanted to play with that — be as internal as possible — and less expressive than I’ve been in recent projects. Not a musical theater writer [like Jonathan Larson in Tick, Tick … Boom!], but a Mormon detective; couldn’t get any further away from each other. I like a challenge.”

To prepare for the role, Garfield said that he immersed himself in Mormonism, learning as much as possible about the radical FLDS sect, which practices polygamy. He also made a “little research trip” to Utah to meet with “countless ex-Mormons, current Mormons, future ex-Mormons, cop Mormons,” he said, adding, “I just asked lots and lots of questions and tried to immerse myself in that culture as much as possible and made sure that there wasn’t a hair out of place in that way.”

In the end, Black, who was raised Mormon, thought Garfield played the part perfectly. “He is exactly the right age — meaning he would, in the Mormon faith, be a man who’s married and has children and he would be asking the questions about what comes next and what came before,” the creator and executive producer told Variety. “And he’s shown in his work, and then getting to know him, a real curiosity about faith, belief and religion. I thought it was very important to bring someone in who understood what they were stepping into, the responsibilities, the potential dangers. His eyes were wide open.”