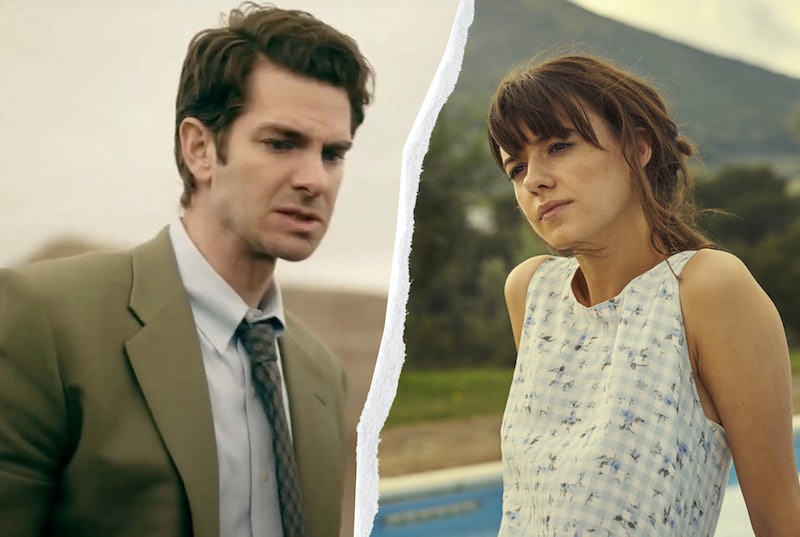 Despite playing two incredibly well-known characters in recent years, Andrew Garfield and Daisy Edgar-Jones sure are putting the work in when it comes to moving past Spider-Man and Marianne from Normal People. From gory feminist horror flicks (see: Edgar-Jones’ upcoming film Fresh) to Garfield’s turn in a remake of Brideshead Revisited (led by Call Me By Your Name director Luca Guadagnino), the pair of actors are also set to star together in the upcoming mini-series Under the Banner of Heaven.

Under the Banner of Heaven Plot

The new mini-series is based on Jon Krakauer’s 2003 crime book Under the Banner of Heaven: A Story of Violent Faith. In the non-fiction book, Krakauer investigates two different mysteries: the history of The Church of Jesus Christ of Latter-day Saints and a double-murder committed by two devout Mormons in Utah. As a deeply religious detective begins looking into the crimes, his faith begins to be rocked by what he discovers.

Under the Banner of Heaven’s Cast

Adapted for TV by screenwriter Dustin Lance Black (who won an Oscar for Milk and is married to Olympic diver Tom Daley), Under the Banner of Heaven is directed by David Mackenzie (director of 2018’s Outlaw King, which starred Chris Pine). Arrested Development star Jason Bateman is also an executive producer.

Andrew Garfield stars as Detective Pyre, a Mormon priest who has his unwavering belief in God shaken when he investigates a horrendous murder and its connections with a powerful family based in Utah. Normal People star Daisy Edgar-Jones plays Brenda, a young member of the Church who is brutally murdered. Elsewhere, the series features Avatar’s Sam Worthington, Denise Gough, and Rory Culkin (brother of Macaulay and Kieran Culkin).

Under the Banner of Heaven Trailer

Earlier this year, this trailer gave a first taste of what to expect from the thrilling new true crime show.

Under the Banner of Heaven’s Release Date

So far, we know it’s “coming soon” to streaming platform Hulu, with a concrete release date to follow.

More like this
Everything To Know About 'Persuasion,' Netflix’s New Jane Austen Film
By Nola Ojomu and Radhika Menon
An 'Emily In Paris' Fave Is Joining Season 5 Of 'The Crown'
By Bustle Editors
Emma Thompson, Lashana Lynch, & Stephen Graham Lead Netflix’s 'Matilda'
By Sophie McEvoy
Everything You Need To Know About Miss Vanjie’s New Dating Show
By Rachel Mantock
Get The Very Best Of Bustle/UK

This article was originally published on March 5, 2022