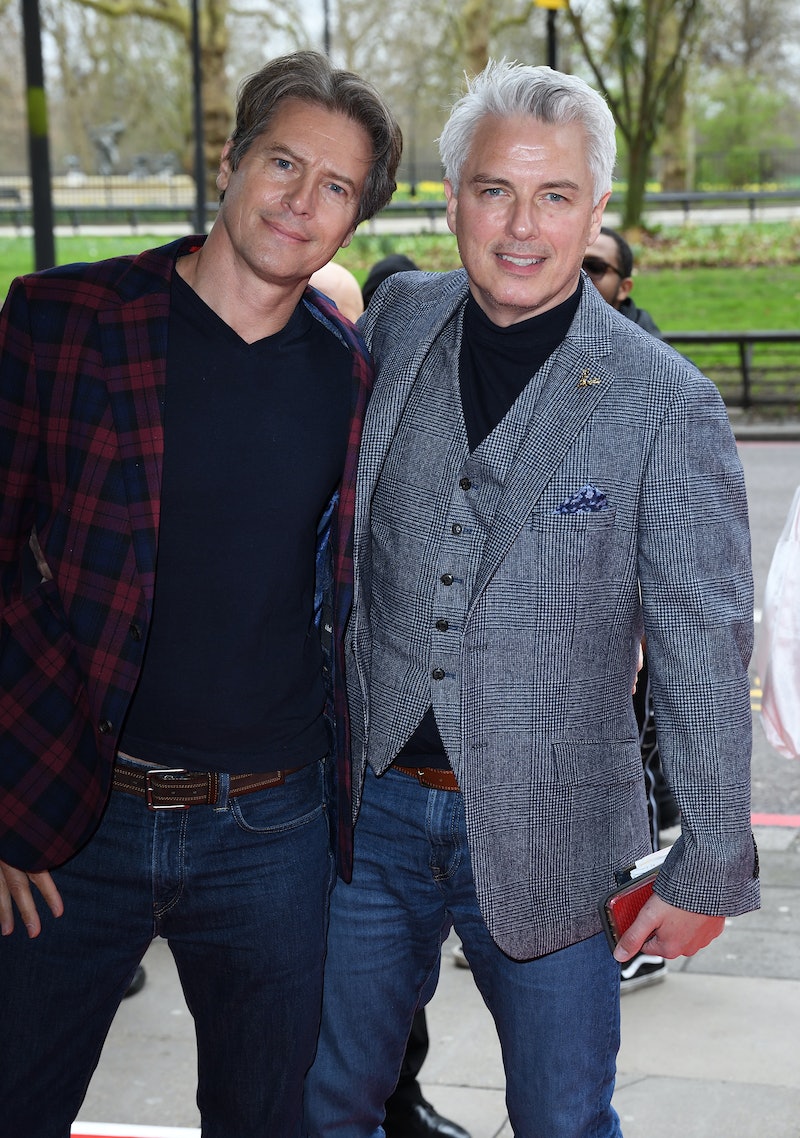 Thanks to the upcoming Doctor Who New Year's Special, the ever-so-confident and charming Captain Jack Harkness will once again be on British screens. Played by John Barrowman, the immortal time agent has been a fan favourite since his first appearance in the 2005 reboot. There's no doubt the actor will be celebrating this character's return, but does he have someone to share the excitement with? Is John Barrowman married?

He is indeed. Barrowman is married to Scott Gill, a British architect. The couple have been together for nearly 30 years, first meeting in 1991 during the Chicester Festival Theatre after Gill saw Barrowman in a production of Rope, according to the Sun. As soon as they locked eyes, Barrowman claims that he found the one "he wanted to spend the rest of his life with."

In 2006 they entered a civil partnership and in 2013 were one of the first couples to be legally married in California after the state allowed same-sex marriage. "Thank you Supreme Court, about time you made it legal," Barrowman said in a video posted to social media at the time. "See you after we have the ceremony!"

The actor revealed that one of the reasons they got married stemmed from an encounter they had entering the U.S. from the U.K., where they were asked to leave the customs queue. Barrowman told the Loose Women panel last year that when asked who Gill was, he told the American customs official that he was his partner, to which they replied: "We don't recognise that here in this country, get out of the line and get over there," per Digital Spy.

"So I said to Scott, 'When this passes, we are going to go, however we are, go to the registry office and get married, and we did — we woke up in the morning, we got out of bed, put on shorts and a T-shirt, drove down to the registry office, and there's a video of us driving there singing." He also discussed how it wasn't just a big day for them, but even more so for other couples that had waited for decades to legally marry.

"There was a lot of other couples all in their late 60s, 70s, and 80s," he said. "And they asked, 'Would you witness our ceremony for us, because most of our families we have disowned us and thrown us out, or they're no longer alive and we never thought we would see this day.' So we stood at 10-20 weddings and we witnessed all of them."

The couple currently resides in Palm Springs, California, and Barrowman recently told the Daily Mail that they were considering starting a family. "Lockdown has made us realise that we've a lot of time on our hands. I know I can work less now and spend more time at home, so there's an epiphany."

While they've yet to decide how to go about having a child, Barrowman's already ahead of the game watching parenting programs and Gill wants to preferably help older children get adopted, "say three siblings who need to be adopted and taken care of," the star says. "We'd love to do something like that, because we'd love to keep a family together. We have a lot of love to offer and a lot of guidance. We feel we could be really good parents."