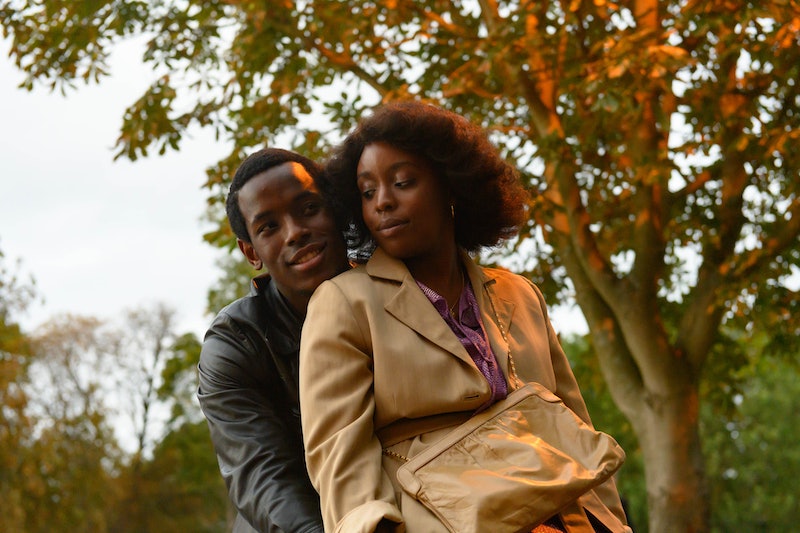 From steaming hot combs to reggae music, Steve McQueen's new Lovers Rock film will feel familiar to many who grew up in Britain's West Indian community. The film forms part of the award-winning director's new Small Axe series, which features five films that tell stories from London's Black community during the 1960s-1980s. The first film, Mangrove Nine, followed the real-life events which saw nine people wrongly arrested in 1970, but is the series' second film Lovers Rock also based on a true story?

The short answer is no. In fact, Lovers Rock is the only story within the Small Axe series that isn't based on real events. The film, which airs on BBC One on Nov. 22, tells the fictional story of romance blossoming over one night at a London house party. However, despite not being grounded in real events, Lovers Rock is expected to bring back "many happy memories" to those who experienced the music and blues parties of the time, a statement sent from the BBC to Bustle reads.

"Lovers Rock sits apart from its Small Axe siblings in that it does not tell a true story of a person or group of individuals taking on the system," explains Small Axe executive producer Tracey Scoffield in the statement, "but is rather a collective reimagining of a time and place very precious to West Indian Londoners."

The new film stars BAFTA 2020 Rising Star winner Michael Ward and newcomer Amarah-Jae St as the lead couple. Aubyn plays Martha, a young woman who sneaks out to the party and meets a brooding stranger, Franklyn (Ward). Set to the soundtrack of Janet Kay’s 1979 epic reggae hit Silly Games, the film is just as much a story about reggae music as it is about the burgeoning romance between two young lovers.

“For me, this is my musical,” McQueen says in the statement. “This is the musical I’ve always wanted to do."

Lovers Rock was co-written by McQueen and novelist and playwright Courttia Newland, both of whom grew up around blues parties. They say the parties were considered a sanctuary for those in the community.

The BBC's statement explains that the parties usually took place in someone's home, where "sweethearts could dress up, pay a small admission fee, dance to romantic Reggae songs, buy beers, eat goat curry and rice and joyously celebrate life without apologies or restrictions."

McQueen says: “I remember stories my aunt would tell, she wasn’t allowed to go to these parties, but my uncle would leave the backdoor open for her so she could go to the Blues. They lived in Shepherd’s Bush, which is next door to Ladbroke Grove. She’d sneak off to Ladbroke Grove which is where the dance was, and then come back in the morning and have to go to church. It was like Cinderella!”