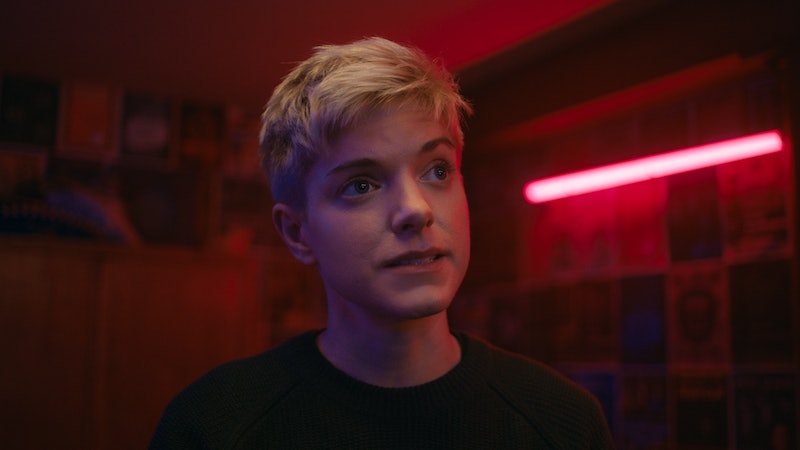 Though Netflix’s dramedy Feel Good is based largely on Mae Martin’s own experiences with addiction and relationships, the comedian’s life isn’t exactly like what’s portrayed in the show. “I’m still working that out, the boundary between fact and fiction,” Martin told The New York Times in May 2021. “The character is where I was about 10 years ago. The emotional truth is real — a lot of the situations or the people are embellished or slightly fictionalized, but there’s a huge amount of truth in it.”

In Season 2, the character Mae grappled with gender identity — something Martin was still working out, too. In an April 2021 Instagram post revealing that they’re non-binary and use both she/her and they/them pronouns, Martin wrote that their relationship to gender was “ongoing and evolving.” How Martin feels about their sexuality is a little more clear-cut: they added that they’re “very bisexual and attracted to people of all genders.”

Martin’s current relationship status is unclear, though they told Autostraddle in March 2020 that they were single. “I have fallen in love pretty hard in the past. Not always,” they added, referencing Mae’s fast-paced relationship with George (Charlotte Ritchie) in Feel Good Season 1. “I know that’s supposed to be a queer trope, but it’s happened to my friends across all demographics. ... I’m a romantic, so I’m all for it. You have to take risks to get the payoff.” Even Martin’s parents “moved in together really fast” after a five-day first date that led to Martin’s mom traveling to England to profess her love for Martin’s father. “They’re my model so maybe I’m naïve. But I’m optimistic!” the actor said of their parents.

When Martin’s close friend Elliot Page announced his divorce from partner Emma Portner in January 2021, fans began shipping the pair. Though they’ve never confirmed they’re anything more than friends, Martin and Page have a close relationship nonetheless, appearing on each other’s social media. Last August, they even got matching coffee mug tattoos, which the Flight Attendant Season 2 star shared on Instagram at the time.

Page also sang Martin’s praises in a May 2021 New York Times profile. “Mae’s integrity, vulnerability, and intelligence sets them apart, both as a person and as a creative force to be reckoned with,” Page told the newspaper via email. “When I first saw their work, I was struck by their honest nuanced depiction of gender and sexuality, and clearly, it is resonating with other people as well.”

Indeed, as evidenced by their exploration of the queer and straight girl dynamic in Feel Good, Martin has “a lot of empathy” for the process of exploring one’s sexuality. “I’ve ended up dating a lot of previously heterosexual people who were sort of rethinking things,” the comedian told Cosmopolitan UK in May 2021. “It’s a process that can be very romantic, and also very painful. And yeah, the main thing is we shouldn't live in a world where that is even a thing.”

Meanwhile, Martin also shared with the outlet that they “really struggle” with the idea that being in love can also carry a sense of lost autonomy. “I get very claustrophobic very easily. And my whole life has been about being desperate to be autonomous,” Martin said. “I don’t think love means losing your autonomy at all ... but I do think that there are different ways to do things. And I wonder if the next generations are going to have slightly different approaches to relationships. It's a lot to expect one person to fulfill all of your emotional and romantic needs.”

More like this
Love Is Blind’s Natalie Claims Shayne Signed Up For 'Perfect Match' While They Were “Still Together”
By Brad Witter
Michael B. Jordan Tackled His "Public Breakup" With Lori Harvey On 'SNL'
By Brad Witter
Here’s What Happens To Bill & Frank In 'The Last Of Us' Video Game
By Brad Witter
Ashton Kutcher Wants Danny Masterson “To Be Found Innocent” In Rape Retrial
By Jake Viswanath
Get Even More From Bustle — Sign Up For The Newsletter
From hair trends to relationship advice, our daily newsletter has everything you need to sound like a person who’s on TikTok, even if you aren’t.