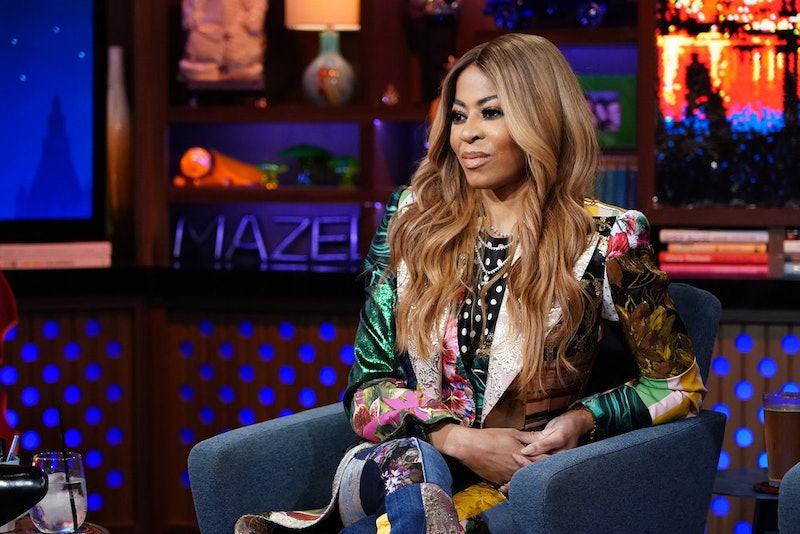 After a dramatic second season, it seemed inevitable that host Andy Cohen would confront Mary Cosby at the Real Housewives of Salt Lake City reunion. Not only were fans eager to see Cosby address her racist behavior toward castmate Jennie Nguyen, but also the ongoing accusations that her Faith Temple Pentecostal Church is secretly a cult. (Cosby has denied the claims.) Alas, viewers may never get that chance: Cosby skipped the reunion, which taped in Los Angeles on Jan. 6.

As longtime Housewives fans know, reunions are not optional. After ex-Bravo star Adrienne Maloof was a no-show at the Real Housewives of Beverly Hills Season 3 reunion in 2013, host Andy Cohen infamously announced, “Adrienne Maloof’s final act as a Housewife is not showing up tonight,” during the taping. (Indeed, Bravo did not invite her back for the fourth season.) Her RHOBH co-star Lisa Vanderpump similarly skipped Season 9’s reunion, though she’d already quit the show at that point. A source told Us Weekly at the time that Vanderpump’s reunion absence required her to forfeit half of her RHOBH paycheck.

The same will likely be true for Cosby. A source told Variety that “by not showing up to the reunion, which is required for the cast, she has sealed her fate.” Cohen also addressed Cosby’s decision not to attend the reunion on his radio show Radio Andy, explaining that while it was “disappointing,” he sensed it was coming. “I spoke to [Cosby] on New Year’s Eve, a few hours before I went on the air, we had a long talk,” Cohen explained. “It’s her story to tell, but I got the sense that she was not finding gratitude on being on the show anymore.”

Though he didn’t confirm if Cosby would return if RHOSLC is renewed for Season 3, he made it sound like she’d already quit the show. “If she doesn’t want to come back to the show, that’s one thing. But I would have liked for her to come back to the reunion, have her say, and leave with her head held high and then make the decision,” Cohen said. However, he added that she was still a point of discussion during the taping. “There was there was a lot of talk of her, as you can imagine, and the reunion was excellent despite her absence. I will say that.”

Days before the reunion, Cosby sparred with Twitter followers after an episode of RHOSLC showed her once again referring to Nguyen’s eyes as “slanted” and her skin as having “yellow tones,” as well as imitating her co-star’s Vietnamese accent. Cosby apologized on the show, but later tweeted that she’ll “never” tell Nguyen she’s sorry. After a viewer called her a “a delusional bigot” who “needs to go,” Cosby replied, “I personally think you need to take your judgmental self and go! Thank you sister!” She encouraged another user to stop watching RHOSLC and “find a new show” after they opined that her behavior was “rooted in darkness,” and told another to “go jump.”

Meanwhile, Cosby’s church controversy remains an ongoing storyline on RHOSLC, with Lisa Barlow alleging that Cosby caused her late friend Cameron Williams “religious trauma” and scammed him out of $300,000. The RHOSLC Season 2 trailer also previewed Williams describing Faith Temple is a cult where Cosby’s congregants refer to her as “God.” (In September, Cosby’s attorney told the Daily Beast the allegations are “extremely offensive and [have] no basis in reality” and that the church doesn’t “force parishioners into poverty” to make church donations.)

Though more specific claims hadn’t yet surfaced, Cosby did address some criticism surrounding her church at the first RHOSLC reunion. She explained that her followers “believe in the exact same thing as Mormons,” and scoffed at suggestions that she’d been running a cult or profiting off of the church. “My church couldn’t possibly take care of me,” she insisted. “I’m a God-fearing woman and would never do that.”

More like this
'RHOSLC' Star Jen Shah Refuses To Do A Post-Sentencing Interview With Andy Cohen
By Brad Witter and Jake Viswanath
Andy Cohen Apologized To Larsa Pippen After A 'RHOM' Season 5 Reunion Dust-Up
By Brad Witter
RHOP’s Robyn Dixon Explained Why Juan Paid For Another Woman's Hotel Room
By Brad Witter
'RHOSLC’s Heather & Whitney Are Still On A “Friendship Break” After Season 3 Reunion
By Jake Viswanath
Get Even More From Bustle — Sign Up For The Newsletter
From hair trends to relationship advice, our daily newsletter has everything you need to sound like a person who’s on TikTok, even if you aren’t.

This article was originally published on Jan. 8, 2022