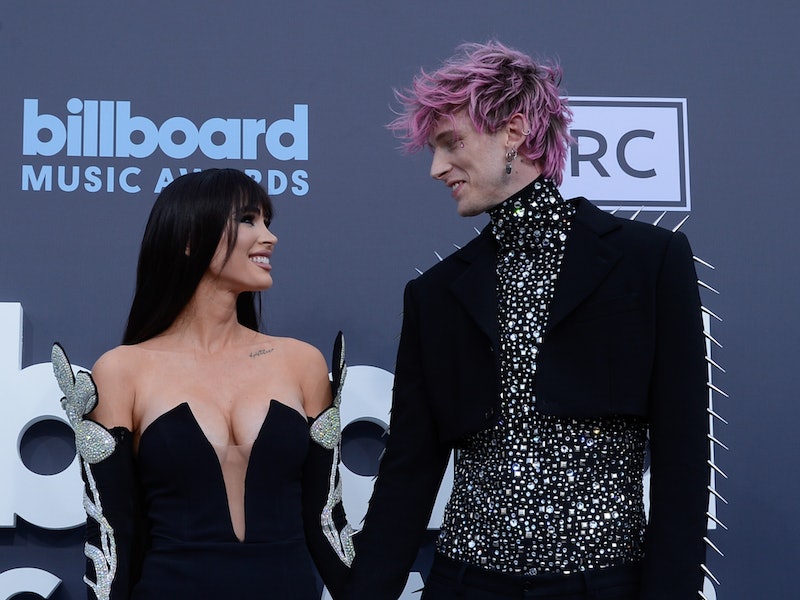 While performing at the Billboard Music Awards on May 15, Machine Gun Kelly dedicated his performance of “Twin Flame” to “his wife” Megan Fox — even though they’re only engaged — and “our unborn child.” The statement stunned fans, as neither MGK or Fox has announced a pregnancy before this televised moment. Notably, in September 2021 at the MTV Video Music Awards, Fox alongside Kourtney Kardashian introduced MGK and Travis Barker onstage as “our future baby daddies,” so all signs seem to point at a future pregnancy if she’s not already pregnant.

“I wrote this song for my wife,” the 32-year-old musician said before performing “Twin Flame” from his recent No. 1 album Mainstream Sellout. “Happy birthday my love.” Fox turned 36 on May 16, just hours after the Las Vegas awards show. Later in the performance, MGK added, “This is for our unborn child.” You can watch the surprising moment at the 0:51 mark in the video below.

Fox and Kelly reportedly met in March 2020 while on the set of the film Midnight in the Switchgrass and confirmed their relationship later that summer using the term “twin flame,” which is the title of the song he performed at the 2022 Billboard Music Awards. “I knew right away that he was what I call a twin flame,” Fox told People in June 2020. “Instead of a soul mate, a twin flame is actually where a soul has ascended into a high enough level that it can be split into two different bodies at the same time. So we’re actually two halves of the same soul, I think. And I said that to him almost immediately because I felt it right away.”

The stars got engaged nearly two years later in January 2022. Both Fox and Kelly are already parents, though they don’t have a child together. Kelly has a 12-year-old daughter named Cassie from a previous relationship. Fox is a mother of three, with ex-husband Brian Austin Green, to Noah (9), Bodhi (8), and Journey (5).

In addition to performing “Twin Flame,” Kelly was nominated for Top Rock Artist, though he lost to Glass Animals, who also beat Imagine Dragons, Maneskin, and Twenty One Pilots.