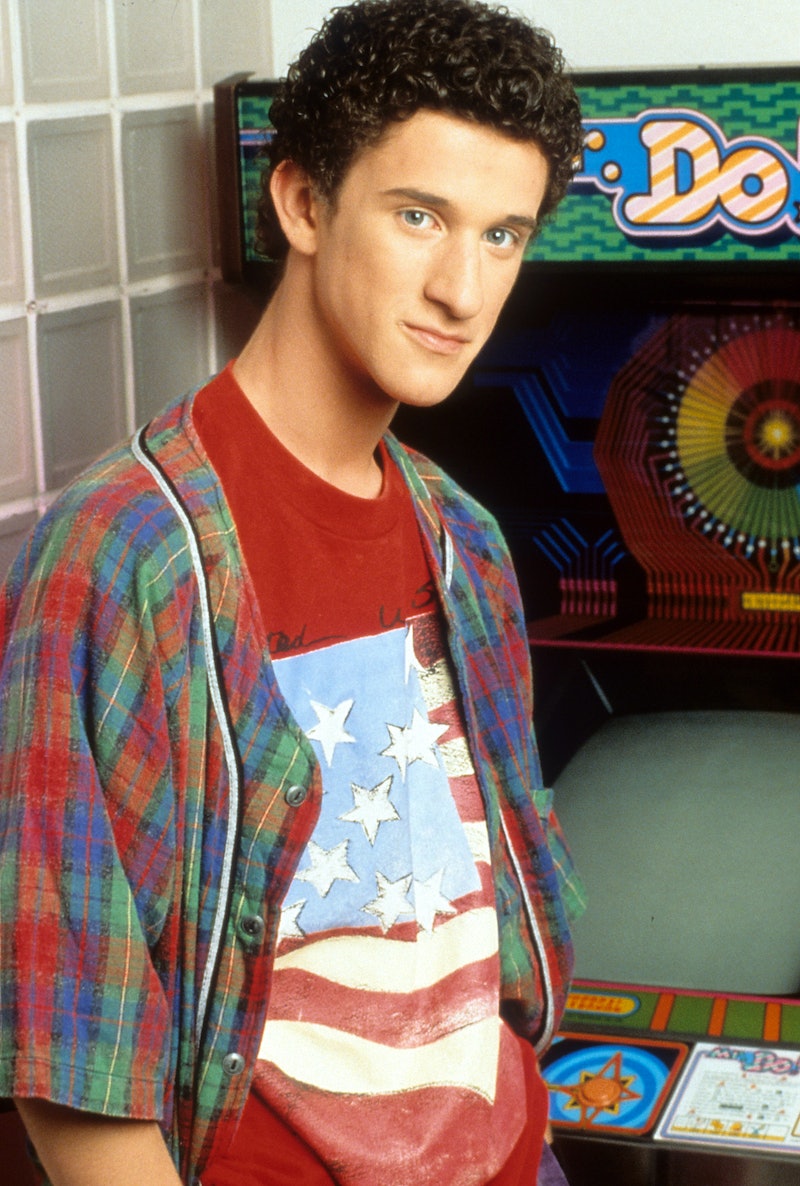 The Bayside gang once sang about being friends forever, and when Peacock's Saved by the Bell reboot premieres on Nov. 25, Zack, Kelly, Jessie, and Lisa will be together again. There will be one OG missing from the reunion, however: Dustin Diamond's Samuel "Screech" Powers. In a February TMZ interview, Diamond admitted he hadn't been invited to reprise the role he played on the original Saved by the Bell series from 1989-1993 as well as its spinoffs, The College Years and The New Class.

"Out of all the cast members, I was in... the most [episodes], and that's not the case anymore if I'm not in the new one, he told TMZ. "And how do you have Saved by the Bell without Screech, right? We should all be a part of this."

Despite his exclusion, Diamond also theorized where his lovably nerdy character might be today. "Screech should be dealing with parenthood and dealing with his kids, and finding out that... maybe he wasn't a barrel full of roses to deal with growing up," he added.

Diamond's past could be partly to blame for him not appearing in the reboot. In 2006, he released a sex tape titled Screeched: Saved by the Smell. The actor later admitted, however, that he used a stunt person and never actually appeared in the video. "I had to take a chance," he later explained to former co-star Mario Lopez (A.C. Slater) on Extra in 2016. "What if that thing had made $3 or $4 million?"

In 2009, he released a widely panned tell-all book, Behind the Bell, which included claims that his Saved by the Bell co-stars allegedly used drugs and hooked up with each other on the set of the NBC comedy. Diamond later blamed a rogue ghostwriter for "[fabricating] a whole bunch of" details. "It wasn't me, I didn't write this," he told Lopez, adding that the book "did the most damage" to his reputation. "I was just as shocked and appalled."

Since appearing on Saved by the Bell, he's also gotten in trouble with the law. In 2015, a judge sentenced Diamond to four months in prison following a stabbing incident in a Wisconsin bar, according to The Hollywood Reporter. Diamond claimed in his Extra interview that he was defending his fiancée, Amanda Schutz, from an assault by an overzealous fan and only "nicked" a man with the tip of his pocket knife. After serving three months of his sentence, Diamond was released on probation, which he allegedly violated after testing positive for a prescription painkiller, and was made to return to jail for two additional days.

However, there may be hope fans could see Diamond, who's now working as a stand-up comedian, in the future should the Saved by the Bell reboot return for a Season 2. "I don't know if he will make an appearance," Elizabeth Berkley (Jessie Spano), who's a producer on the Peacock reboot, said on Watch What Happens Live with Andy Cohen on Nov. 17. "We'll see if there's another season. Maybe it's something to explore, and I haven't talked to him in a long time."

More like this
Netflix Reveals First Look At Wednesday In The 'Addams Family' Spinoff Series
By Bustle Editors
A New 'And Just Like That' Table Read Pic Confirms A Key Character's Return
By Jack Irvin and Grace Wehniainen
Everything To Know About The Long-Awaited ‘Community’ Movie
By Stephanie Topacio Long
24 Years Ago, 'Friends' Dropped Its Most Underrated Ross & Rachel Episode
By Grace Wehniainen
Get Even More From Bustle — Sign Up For The Newsletter