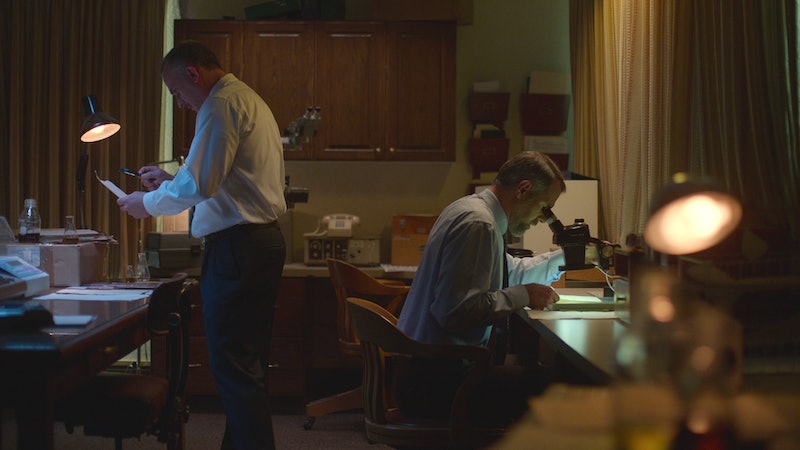 Netflix's docuseries Murder Among the Mormons explores the story of Mark Hofmann, who orchestrated the 1985 Salt Lake City bombings that killed two people. At the center of Hofmann's plot was an attempt to cover up the origins of the "White Salamander Letter," a controversial document that threatened to undermine the teachings of the Church of the Latter-day Saints.

Before the bombings, many in the Mormon community believed that Hofmann was a Mormon historian with a natural talent for unearthing rare and valuable documents. But he was actually a highly skilled forger, falsifying the works of Charles Dickens, Mark Twain, Emily Dickinson, and George Washington, among many others. One of Hofmann's most high-profile forgeries was the "White Salamander Letter," which he claimed to have discovered in the early 1980s. Supposedly written in 1830 by Mormon church scribe Martin Harris, it detailed how Smith found the church's famed gold plates with the help of "a seer stone" and "an old spirit" in the form of a white salamander.

This was contrary to the previous teachings of the church. According to Mormon belief, Joseph Smith was visited in 1823 by the angel Moroni who led him to the set of gold plates. It was with the help of angels — not a salamander — that Smith eventually translated the plates into the Book of Mormon. As former assistant church historian Richard E. Turley Jr. says in Murder Among the Mormons, the letter "gave a far different story of the church's earliest roots" and twisted the "context of Christian-familiar terms like 'angels'" into a more "folk magic context," which upset church leaders.

Still, Mormon historians like Ronald Walker and Dean C. Jessee, both associate professors at Brigham Young University, defended the letter's authenticity when it was first released. ″There is no reason to suspect the authenticity of the Harris letter, based on the physical properties and handwriting,″ Jessee told the Associated Press in 1985.

The controversy only made the document more valuable. According to The New York Times, Steven F. Christensen — a collector of Mormon artifacts — reportedly paid Hofmann $40,000 for the letter. As Murder Among the Mormons points out, Hofmann was in debt and shopping around other fake documents at the time. He even hoped to sell his forgeries to the Library of Congress for $1 million. But when the other deals didn't go through, Hofmann panicked. On Oct. 15, 1985, the morning he was supposed to turn over the "White Salamander Letter" to Christensen, Hofmann used bombs to kill Christensen and then Kathy Webb Sheets, the wife of Christensen’s associate and fellow Mormon bishop Gary Sheets. As Hofmann later explained, the first bombing was to prevent Christensen from exposing him; the second was a diversion to throw suspicion off of him.

After Hofmann was hospitalized for injuries sustained from another one of his bombs, authorities surmised he was the perpetrator. In January 1987, Hofmann was sentenced to life in prison after pleading guilty to second-degree murder and theft by deception. He has never expressed remorse for his crimes. “As far back as I can remember I have liked to impress people through my deceptions,” Hofmann wrote in a 1988 letter, per Deseret News. “Fooling people gave me a sense of power and superiority.”

The Mormon Church now has an entry titled “Hofmann Forgeries” on its website, under the church's history topics. “False assumptions inspired by Hofmann documents or citations that eventually lead back to his fabricated evidence still distort some depictions of Latter-day Saint history,” reads the entry.

Over three decades later, Hofmann remains in prison. He's recognized as one of the most skilled forgers in history, and it's unknown how many of his fakes are still in circulation.