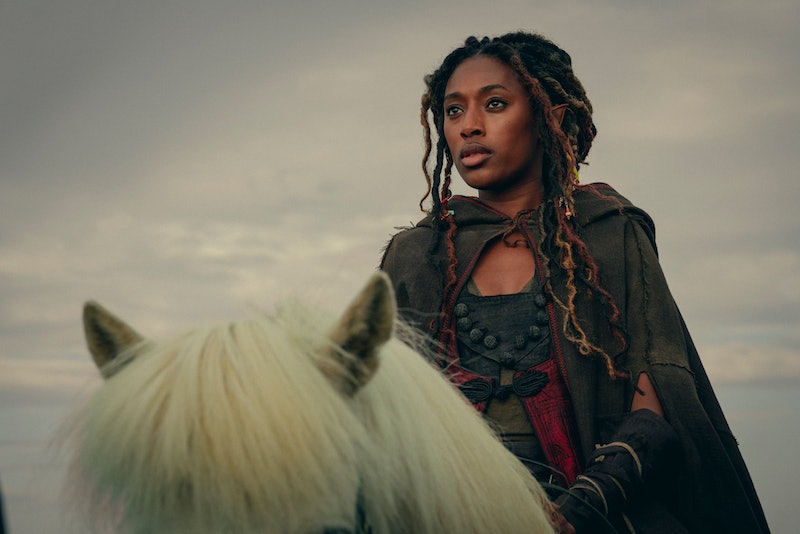 Beginning with The Witcher in 2019, Netflix has given new life to author Andrzej Sapkowski’s fantasy novel series. After discovering a plot hole while working on the flagship series, writer-producer Declan de Barra pitched an idea for a prequel, The Witcher: Blood Origin, which Netflix executive Kelly Luegenbiehl said unlocked “a whole world of additional stories.” The literary source material won’t offer many plot clues for the new series, though: Luegenbiehl added that de Barra based the narrative on just “a few lines in the books.”

In a November 2021 interview with Entertainment Weekly, de Barra explained how he got the idea to rewind the story to 1200 years before The Witcher. “We were trying to understand what the world was like for elves right before the Conjunction of the Spheres,” he recalled, citing the event that merged the worlds of humans, elves, and monsters. “It’s very vague in the books as to what happened. I got out a whiteboard and sketched out this plan of what I thought: what elves wanted in this world and what the society was like pre-colonization. That kind of stuck.”

Elaborating that Sapkowski “reinterprets folktales and history” in his novels, the showrunner added, “When you look at our own history, societies that had been at their height, like the Roman Empire or the Mayan Empire, would be right before the fall and then we're in dark ages again. That fascinated me to wonder what that [elven] world could have been and what society would have been like. That’s what we’re going to explore here.”

The prequel tells a story of seven outcasts who unite against an unstoppable power that took everything from them, according to Netflix’s official description. Their blood quest gives rise to a prototype witcher in a conflict that brings about the Conjunction of the Spheres. Sophia Brown (Éile), Michelle Yeoh (Scían), and Laurence O'Fuarain (Fjall) star in the streaming series.

“We know in the books to a certain point how the witchers were created. The reason we call it Blood Origin is because we’re telling the tale of the first prototype of a witcher,” de Barra explained to ComicBook.com. “This witcher is not the witcher we know who’s humanlike and, you know, can take potions and have powers. It’s 1.0. But it’s the origin of what enables witchers to exist in The Witcher world in Sapkowski’s books.”

In addition to Sapkowski’s novels, The Witcher universe also has a built-in fan base, thanks to the popular video games and a comic book series. “It’s wonderful and terrifying at the same time because you want to pay homage to the books and the lore and satisfy all of those fans,” de Barra continued. “But also, you want to create a whole story that exists, that would be worthy of a Sapkowski book, that lives on television and is self contained. And getting to build that world and explain how everything came to be with The Witcher, it’s just, that’s like a golden opportunity. Couldn’t get better than that.”

More like this
Netflix Shut Down 'Bridgerton' S3 Rumours About A “Very Dark” Storyline
By Bustle
Bill & Frank’s 'The Last Of Us' Episode Has Twitter Emotionally Wrecked
By Alyssa Lapid
Here’s What Happens To Bill & Frank In 'The Last Of Us' Video Game
By Brad Witter
'The Last Of Us' Video Game Revealed Tess’ Fate In The HBO Series
By Brad Witter
Get Even More From Bustle — Sign Up For The Newsletter
From hair trends to relationship advice, our daily newsletter has everything you need to sound like a person who’s on TikTok, even if you aren’t.