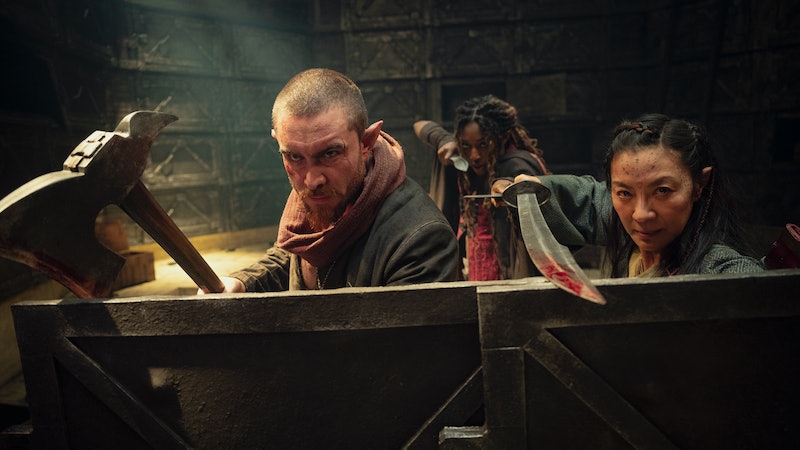 Already missing the world of The Witcher? As viewers count down the days until they’re reunited with Geralt, Ciri, and other fan-favorite characters in Season 3, a new Witcher prequel series will make the wait a little more bearable. The Witcher: Blood Origin is set to provide even more insights about what it means to be a Witcher. According to Netflix, the prequel will take place 1,200 years before the events you’ve seen so far, “exploring the creation of the first prototype Witcher, and the events that lead to the pivotal ‘Conjunction of the Spheres,’ when the worlds of monsters, men, and elves merged to become one.”

Though plot specifics are still under wraps, The Witcher showrunner Lauren Schmidt Hissrich recently talked to Digital Spy about how the prequel stands apart from the flagship show. “One of the things that Declan de Barra, who wrote the series, brought to it is: what if that world is not a medieval version of our medieval world, but in fact an age of enlightenment?” she said. “How is it slightly more modern? How is that civilization more learned in some ways? And then how do we start to lay the stepping stones to where we are now?”

If the Conjunction of the Spheres doesn’t sound super familiar to you, don’t worry — you didn’t miss anything. The event hasn’t been explored in great detail in Witcher media yet, which is one of the reasons Hissrich wanted to tackle it now. In search of spinoff material, she told Digital Spy, she’d “always go back to the books, and try to find things that are either hinted at, or mentioned, or that we don't have the time to explore in the main series, or that [Andrzej] Sapkowski didn’t explore fully in the books.”

The fun part for Witcher fans? It sounds like Blood Origin will be filling in the blanks from the source material, making it less predictable than a traditional book-to-screen adaptation.

The Witcher: Blood Origin cast includes Michelle Yeoh as Scían, a sword-elf. Per Netflix’s character breakdown released this summer, Scian is on a “deadly quest to retrieve a stolen sacred sword will lead her on a journey that will change the outcome of the Continent.”

Laurence O’Fuarain will play Fjall, “a warrior who finds himself fighting beside the most unlikely of allies as he carves a path of vengeance across a continent in turmoil,” and Sophia Brown will play Éile, “an elite warrior with the voice of a goddess [whose] career as a nomadic musician gets cut short due to a grand reckoning on the Continent.”

In a teaser that appeared during The Witcher Season 2’s credits, viewers got their first glimpse of The Witcher: Blood Origin. Set to a epic-ified cover of Ellie Goulding’s “Burn,” the teaser features sweeping Continent landscapes and Scian’s sworld-elf skills.

So far, Netflix has not announced exactly when The Witcher: Blood Origin will come out — just that it will be released in 2022. However, given the fact that there’s already a teaser out, it seems like more specifics could be on the way very soon. If we’re going by Witcher precedent, the first teaser for Season 2 aired in July, and the season premiered five months later. Also, unlike The Witcher, the prequel will feature six episodes instead of the usual eight.

This post will be updated with the trailer, release date, and additional plot details as more information on The Witcher: Blood Origin becomes available.

More like this
'The Crown' Season 6 Has Suspended Filming "Out Of Respect" For The Queen's Death
By Bustle Staff
Netflix Shut Down 'Bridgerton' S3 Rumours About A “Very Dark” Storyline
By Bustle
Everything To Know About 'And Just Like That...' Season 2
By Jack Irvin and Grace Wehniainen
The 'Freeridge' Cast Shared Their Hopes For A Potential Season 2
By Grace Wehniainen
Get Even More From Bustle — Sign Up For The Newsletter
From hair trends to relationship advice, our daily newsletter has everything you need to sound like a person who’s on TikTok, even if you aren’t.