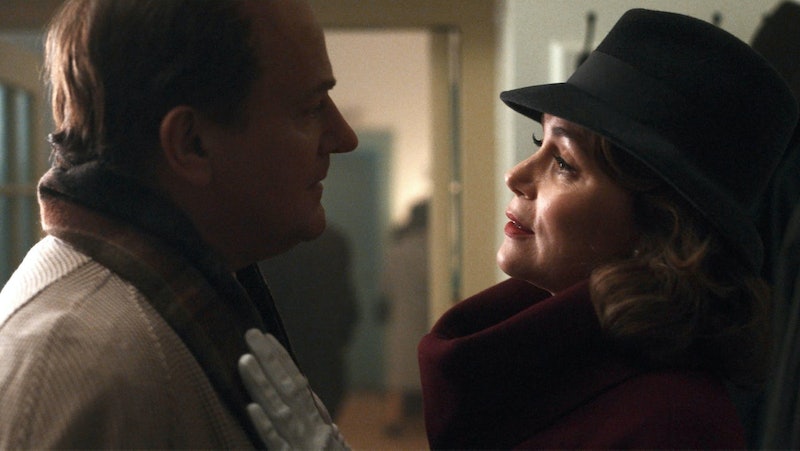 Adapted from Stephen Michael Shearer's An Unquiet Life, Sky's forthcoming original drama To Olvia charts the story of famed children's author Roald Dahl and his glamorous Hollywood star wife Patricia Neal as they struggle to cope with an unimaginable loss. But, is To Olivia based on a true story?

According to Sarah Wright, Director of Sky Cinema and Acquisitions at Sky UK & Ireland, the film is based on real events and will uncover "the true story" of Dahl and Neal's relationship throughout the early 1960s, when the pair's lives were turned upside down following the tragic death of their daughter, Olivia. Wright explained: "We are all familiar with the extraordinary Roald Dahl and Oscar-winning actor, Patricia Neal, but in To Olivia, audiences will discover the true story of the heartache and struggles the outwardly glamorous couple experienced prior to their immense success."

Per Entertainment Daily, Olvia Dahl was the eldest daughter of Dahl and Neal. She died at the age of seven in November 1962, after contracting measles encephalitis. In the upcoming Sky original, viewers will learn how Dahl and Neal's shared grief surrounding the loss of their daughter became "a source of redemption and strength" and wound up changing their lives "forever."

Downton Abbey's Hugh Bonneville appears in the new series as novelist Dahl, while Patricia Neal is portrayed by It's a Sin and Bodyguard star, Keeley Hawes. Per the Express, the pair are joined in the film's cast by Outlander star Sam Heughan as Hollywood royalty Paul Newman, Game of Thrones' Conleth Hill as American director Marty Ritt, and the legendary Geoffrey Palmer as Roald's headmaster Geoffrey Fisher — which became Palmer's final role before his death in November 2020.

More like this
Rupert Grint Just Shared A *Major* Update About Ron Weasley’s Future
By El Hunt
Theo James Would “Love” To Star In George Michael Biopic
By Sam Ramsden
Adam Ali Hopes 'Waterloo Road' Will “Subvert” Queer Misconceptions
By Sam Ramsden
Yes, You Can Stream ‘To Leslie’ In The UK Now
By Sam Ramsden
Get The Very Best Of Bustle/UK
Sign up for Bustle UK's twice-weekly newsletter, featuring the latest must-watch TV, moving personal stories, and expert advice on the hottest viral buys.