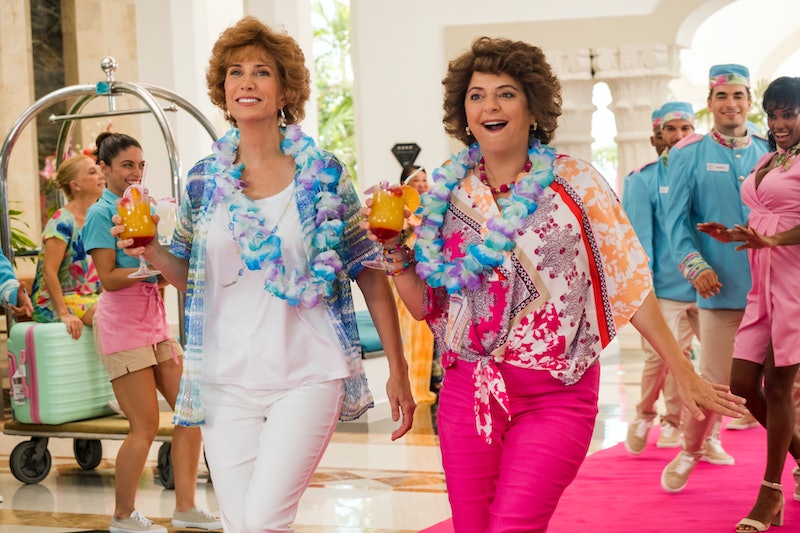 In the kitschy and colorful Barb & Star Go to Vista Del Mar, Kristen Wiig and Annie Mumolo star as two middle-aged midwestern ladies who need a great escape. After getting laid off from their jobs at Jennifer Convertibles, they head to the luxurious Vista Del Mar, Florida for a little sunshine, self-discovery, and sexual flings. The bright white beaches and neon pink Palm Vista Hotel offers a very different atmosphere than their home in the very beige and normal Soft Rock, Nebraska, with just enough cheesy fun activities to make those of us cooped up inside in February want to head straight for the same resort. But is Vista Del Mar a real place?

You can pop Vista Del Mar, Florida into Google and bring up any number of rentable condominiums and seaside escapes in the Sunshine State, but the Vista Del Mar of Barb & Star isn't based on any particular real-life hotel or city. Barb & Star didn't even shoot in Florida, with the production opting instead for Cancun, Mexico. The swank Hyatt Zilara stands in for the Pal Vista Hotel, where Barb and Star relax by the sea, shop on the boardwalk, and get caught up in a bizarre plot involving a villainess, a himbo henchman played by Jamie Dornan, and killer mosquitoes.

While the Hyatt Zilaria had the perfect combination of seaside access to the turquoise Caribbean ocean, pools galore, footbridges, skylights, and columns, there was one big problem with it, says the film's production designer Steve Saklad in the press notes: "It was beige. So we filled that place with turquoise and pink, but also red lighthouses sitting in the lobby that were hung with a mobile of white seagulls that sort of fluttered in the breeze. And then we added a huge Alice in Wonderland garden with giant crocodiles and iguanas and oversized sunflowers and butterflies. So there was this sort of fantasy world that we were building."

Indeed, Architectural Digest offers up some eye-popping pics and more details as to how the production turned a modern resort bathed in calming Earth tones into a more "Technicolor dream of turquoise banners, pink flamingos, and dayglow colors," Saklad tells the mag. "We were prepared to take seaside metaphors to the nth degree," he says noting the "menagerie of plastic animals," wicker furniture, sea glass, and Styrofoam sculpted shell headboards. "These ladies are climbing out of their shells."

The campy vibe, hilarious musical numbers, and joyful attitudes of its two leads make Barb & Star Go to Vista Del Mar a refreshing balm for these anxiety-ridden times and dark winter days. And the fact that the Palm Vista Hotel isn't a real place doesn't stop me from wanting to teleport there on vacation immediately.