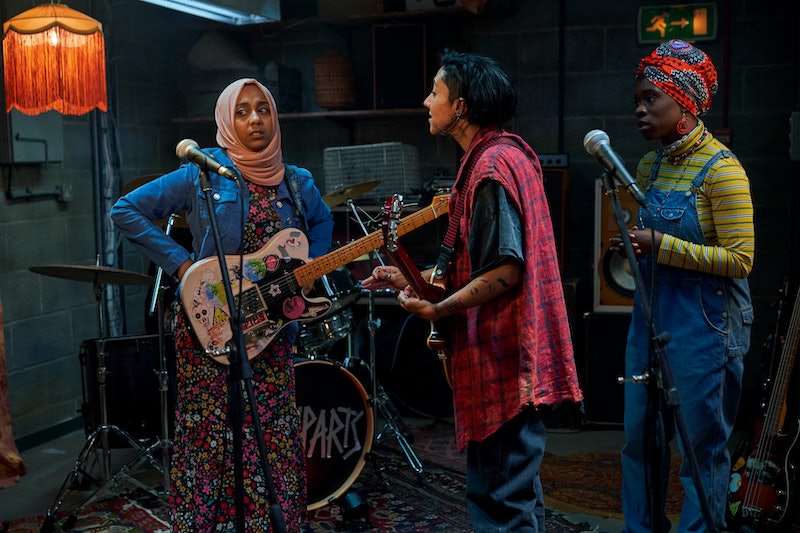 Channel 4’s new musical comedy We Are Lady Parts has already proven a hit, despite only premiering on May 20. Following the all-female Muslim punk group, the show has been heralded for its ability to tackles stereotypes, celebrate sisterhood, and champions diversity, all while making audiences laugh. But is We Are Lady Parts based on a true story?’ Here’s what you need to know.

Writer and director Nida Manzoor has spoken extensively about how her own life experiences motivated and inspired her to write the show. In a piece she wrote for iNews, Manzoor explained that she was “frustrated by the stereotypical narratives about Muslim women in the media as oppressed victims, lacking agency and self-hood. I wanted to write something that reflects me, my friends, the world I know,” she wrote, before later adding that she “want[ed] to write fiction inspired by fact.”

The writer later revealed that there were parts of filming the show that felt deeply personal to her, so much so that she almost felt embarrassed: “We start cutting this one scene,” she begins. “It’s a pretty personal one and I feel my chest clench, my breathing gets shallow. Is this too personal? Have I shown too much? What are people going to think?”

She continued: “I am overcome by a feeling of intense embarrassment. Is it embarrassment? Shame? That feeling when you’re the first kid in class to hit puberty and you feel like a freak. I run to the toilets and do some deep breathing... No, no, I tell myself, I wanted to be honest, I wanted to be true, that was the only meaningful way I felt I could do the whole ‘responsible representation’ bit. But why is being honest so scary?”

The director also spoke to Digital Spy recently about the show being “somewhat autobiographical” and being based on her experiences. “I found it a very cathartic experience,” she noted. “What I wanted to do was show that you can have multiple ways of being. There's no one cookie-cutter way of being a Muslim woman. There's such a variety of ways of being.”

It seems that unsurprisingly, the honesty and truth that shone through in Manzoor’s writing was one of the big pulls for the cast of the series, too. “The writing was so thoughtful, tender and considered and made me feel like this is a piece of art that someone put so much love into,” said Juliette Motamed (who plays the band’s drummer Ayesha), with Faith Omole (bassist Bisma) adding: “everything is so true and authentic.”

Another element of the show that is seemingly inspired by real life is the music. Manzoor wrote for iNews that when she was first planning the show, she thought: “It would have to have lots of original music in, which I would write with my siblings because we’ve been making music together since we were tiny humans.”