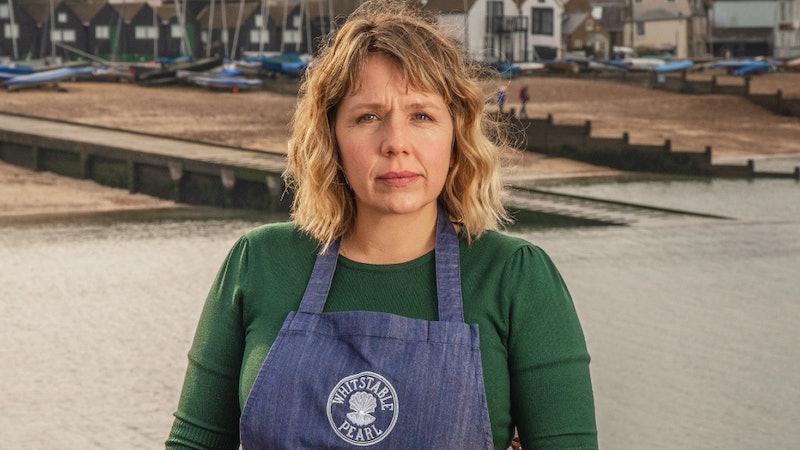 Brand new mystery drama Whistable Pearl is described as having “all the fun content of Midsomer Murders and Doc Martin” but with “darker elements”. Starring actor and comedian Kerri Godliman (After Life), the six-part series follows Pearl, a successful restaurateur in Whitstable, who, with long ambitions to be a detective, investigates crimes and murders in the seaside town. The ‘Whodunnit?” series is based on the murder mystery novels by Julie Wassmer, but is Whistable Pearl based on a true story?

Directed by Line Of Duty and Peaky Blinders’ David Caffrey, The Whistable Pearl isn’t a true tale, however, it is heavily inspired by author Julie Wassamer's interests.

“I’d wanted to write a crime novel for years," she says, via Kent Online. "I began by trying to create a male private eye but I somehow never felt I got to know him very well.

"In 2012, though, him became her and Pearl was born,” she added. “Then I surrounded her with things I love – good food, Whitstable, crime mysteries – and so she became a seaside restaurateur with a one-woman detective agency on the side."

What’s more, Wassmer has lived in the Kent seaside town of Whistable with her husband for 21 years.

"Yes, we’re DFLs – that’s what the locals call those of us Down From London – but, perhaps because of that, I’ve never taken for granted how special Whitstable is,” the author shared.

The new series, available to stream via Acorn TV, is based on Wassamer’s books, with the first episode inspired by her first novel The Whitstable Pearl Mystery, whereas four episodes in the series are original scripts with Wassamer producing.

As the synopsis describes, locals soon flock to [Pearl] with all kinds of cases. “But when a friend dies suspiciously, Pearl finds herself in conflict with gruff new cop in town DCI Mike McGuire,” it adds.

Kerry Godliman, who previously starred alongside Ricky Gervais in After Life, plays Pearl in the new series. “Pearl’s original ambition was to be a detective, but she gave up that career when she was young because she got pregnant” explained Kerry, ahead of Whistable Pearl’s release. “Her teenage son Charlie (Rohan Nedd) is now coming up to leaving home. So, out of the sense of a new beginning, she's gone back to sleuthing. But she’s not a cop. Her hobby just happens to be finding dead bodies and poking her nose into things.”

Whistable Pearl also stars Howard Charles as DCI Mike McGuire, who finds himself clashing with Pearl as they both try to solve murders in the area.

“With Mike and Pearl there’s an attraction but it’s against both their better judgements,” explained Kerry, via Whattowatch. “They argue, clash and resist it. For him it’s a real pain in the ass that he’s met and fancies her!”