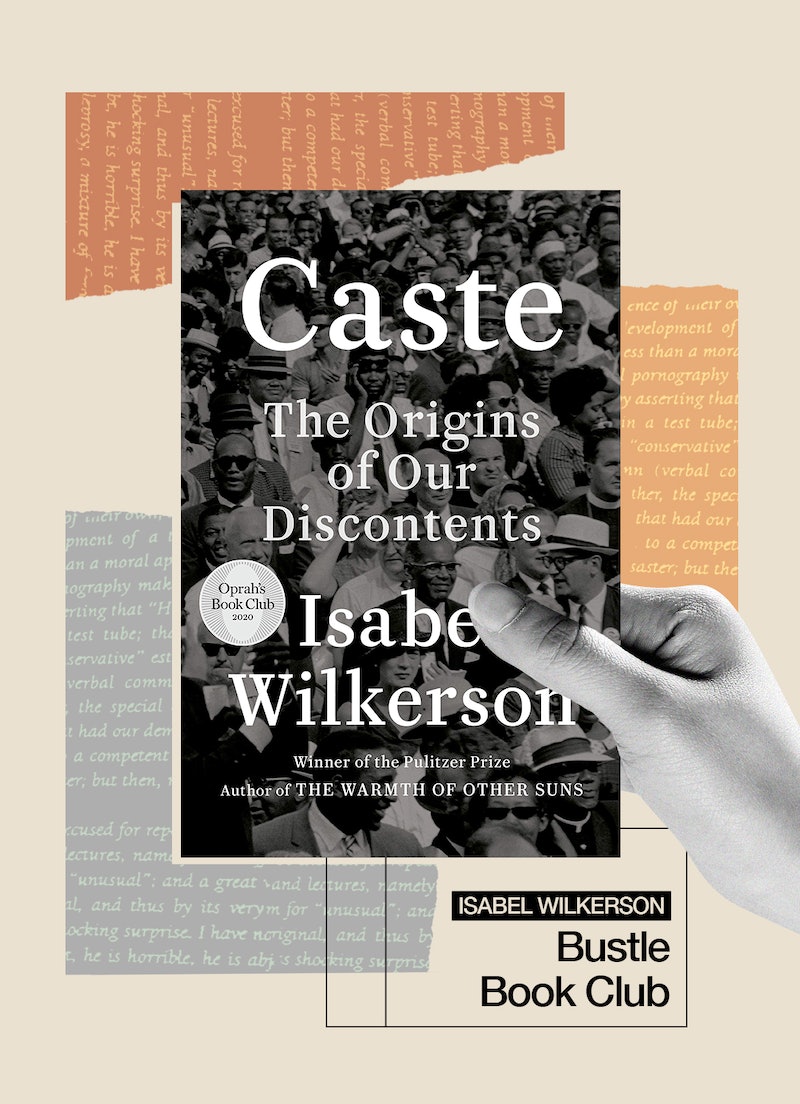 Pulitzer Prize-winning journalist Isabel Wilkerson was still on tour discussing her acclaimed 2010 debut The Warmth of Other Suns when the idea for her second book, Caste, came to her. “I was talking to audiences about what [my first] book was about, and I was using the term ‘caste,’ and it landed so naturally [with] people,” she tells Bustle. She decided that perhaps the word — and people’s reaction to it — was worthy of greater exploration.

The idea further took hold for Wilkerson after the shooting of teenager Trayvon Martin in 2012. “Here he was, a young Black teenager who was seen as being out of his place in that neighborhood, and he was seen as suspicious merely because of what he looked like,” she says. “It all coalesced for me in that moment.” The result is a powerful look at how America uses race as a visible instrument for building and maintaining a hidden caste system, which classifies people socially and often by specific identifying markers. To further construct her argument, Wilkerson also weaves in stories from the histories of India and Nazi Germany, juxtaposing their cultural castes with that of contemporary America.

But when Wilkerson first began reflecting on these themes nearly a decade ago, she never could have predicted the cultural moment that Caste would be published in. The book came out in August, soon after Americans began turning to anti-racist texts in the wake of George Floyd’s death at the hands of law enforcement officials in May. But learning a few key facts about racism isn’t the same as fully immersing oneself in the long and violent history of structural oppression. Caste's singular power is in showing how racism isn’t the sole issue in America, but is indicative of more widespread toxicity lurking beneath the surface. It also illustrates just how interconnected so many repressive and violent histories around the globe really are.

Not only has Caste received universal praise, with the New York Times heralding it both an “instant American classic” and the “keynote nonfiction book of the American century thus far,” but it also caught the eye of Ava DuVernay, who recently announced that she has a feature film based on the book in the works with Netflix.

As the end of 2020 nears, Bustle spoke with Wilkerson about drinking dandelion tea, reading Barack Obama’s new memoir, and crafting the most influential book of the year.

On her love of phalaenopsis orchids:

Flowers are really, really critical to me. I always have vases of orange roses or white tulips or hydrangeas or sunflowers, something like that. I always have a phalaenopsis orchid somewhere around me at all times.

I also have this small bust of the patron saint of the Dalit people in India, which was given to me in the course of working on this book by Indian scholars of caste. And I have these sprigs of cotton that I picked on a trip to Mississippi when I was working on The Warmth of Other Suns.

On her extensive tea collection:

On procrastinating with obscure book citations:

When you’re doing nonfiction, you can procrastinate very easily by doing more research. There’s always something else that you can look into. There’s always an additional reference, one more citation that you saw in some book that you should go and get and read. With nonfiction, there’s the deep engagement with what has gone before you, and there’s so much that’s gone before you that you can spend a whole lot of time on that.

On learning to listen to music when writing:

For most of my writing life, I haven’t wanted or needed music in the background. But I found that with this most recent book, I really did gravitate towards music or something that would be calming. I turned to the music of Philip Glass, for example. I find his music to be both propulsive and meditative at the same time. It was the perfect level [for] what I was having to engage with. I was dealing with a massive amount of history, introspection, and distillation into my own theories about this topic, and I found myself relying on a calming atmosphere.

On devouring A Promised Land:

I was honored to be among the handful of trusted readers who [President Obama] sent early copies to. It's this great work of history and introspection from him. He brings together this grandeur and intimacy in allowing us into his evolution from citizen to candidate to president. He allows us into his inner ruminations as he’s making his way through. He allows us, along with him, [to see] the uncertainty of his quest, because it’s not inevitable. It was just profound and brilliantly done.