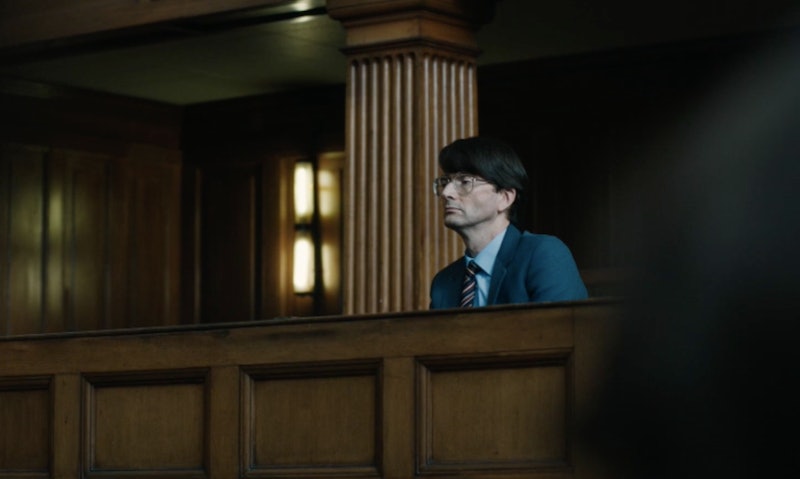 Following on from The Lost Honour of Christopher Jeffries and White House Farm, ITV is adding another intriguing true crime drama to its 2020 line-up with Des, a three-part series focusing on the story of serial killer Dennis Nilsen. Today (Sept. 9) the network released its first teaser clip for Des, which shows David Tennant as a terrifyingly serene Nilsen standing trial in court.

The clip (which can be viewed on the Radio Times website) opens with a barrister addressing the jury at the start of Nilsen’s trial, presenting them with the decision they have to make: is Nilsen guilty of murder or manslaughter? In other words, were the murders he carried out pre-meditated and purposeful or were they simply the actions of a man experiencing a severe and deadly mental health break down?

Tennant – whose dark hair, pale face, and large glasses create a look almost indistinguishable from the real-life Nilsen – sits calmly while the barrister speaks about his fate. His tranquility stands at odds with other characters in the court room: a blonde woman (played by Chanel Cresswell) crying in the stands, DCI Peter Jay (Daniel Mays), the man who was in charge of catching Nilsen, looking on edge, and news reporter Brian Masters (Jason Watkins, who recently starred as Christopher Jeffries on ITV) appearing nervous but interested.

In a recent interview with the Radio Times, Tennant discussed how reviewing old footage of Nilsen helped him prepare for the role. “There is some footage of Nilsen in an interview he did with Granada Television when he was in prison, and he was an avid home movie-maker, some of which survive, so we were able to see those,” the actor said. “It was a useful starting point to see how he moved and how he sounded, as there are occasional bits of audio of him around, too."

Nilsen – also known as "the kindly killer" or "the Muswell Hill murderer" – was sentenced to life in prison on November 4, 1983. He admitted to killing around 15 men and boys and was found guilty of six counts of murder and two counts of attempted murder. Nilsen reportedly approached his victims in pubs or bars and befriended them before inviting them back to his flat and killing them. His crimes were only uncovered when a plumber found human remains in the drains outside of his flat in North London.

ITV's new show will not focus on the murders themselves (which the Radio Times reports is "out of respect for the dead") but instead explore the psychology of Nilsen and what led him to carry out such abhorrent acts.

Des will begin airing on September 14 at 9 p.m. on ITV. The next two episodes will air on consecutive days at the same time.