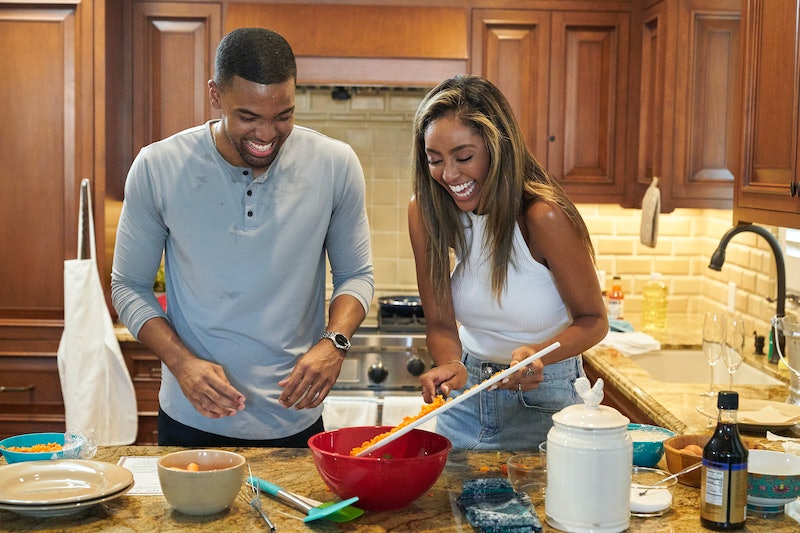 It's been an unusual and unprecedented Bachelorette season from the get-go, but Tayshia Adams has finally made it to the hometown dates. Unsurprisingly, aeronautical engineer Ivan Hall, who Tayshia once said "really understands" her, is among the final four contestants vying for her heart. Due to the pandemic, Ivan's family will instead fly out to meet Tayshia at Palm Springs' La Quinta Resort, rather than her going to their home in Dallas. The preview for the episode shows Tayshia rushing to hug his parents, and later she helps Ivan cook. "Seeing Tayshia with my family, I felt like I saw a glimpse of the future," Ivan says.

Tayshia meeting Ivan's family on The Bachelorette is obviously going to be a big deal for the family-oriented aeronautical engineer. Ivan has openly shared how proud he is to be half-Filipino and half-Black, and he mentioned his mom and spoke Tagalog in his limo entrance to Clare. ("Manganda ka," he said, which means "you are very beautiful.") On Instagram, he's shared photos of his lolo and lola (grandpa and grandma), and also posted a sweet birthday tribute to his mom and a picture of his niece, Kehlani. Ivan doesn't use social media much, but older posts also include an old photo of his dad and one of him and his younger brother when they were kids.

It makes sense that Ivan and Tayshia clicked early on, and that Tayshia feels at home with his family. Tayshia is half-Black and half-Mexican, and on their one one-on-one date they had a frank discussion about their biracial identities, police brutality, and the Black Lives Matter movement. Ivan also opened up about the pain his family has experienced, revealing that his younger brother was sentenced to four years in prison, where he experienced abuse by correctional officers. "With George Floyd and police brutality, that's something that really hit home for me. It's changed me as a man," Ivan said, adding that "these people have a job to do," but they "can’t just be hurting people."

Even though Tayshia and Ivan clearly connect on a deeper level than some of the other contestants, that doesn't necessarily mean that the two of them end up together. In the preview, it looks like Ivan's mom has doubts about whether an engagement is even a sensible decision after only a few weeks of knowing each other. "I'm still a big skeptic," Ivan's mom admits to Tayshia. "It's just so fast." Later, there's a quick shot of what appears to be Ivan crying, which doesn't bode well considering Tayshia admits in the same preview that she's also falling for Zac. But even if Ivan ends up a bachelor after all this, at least we know his family has got his back.