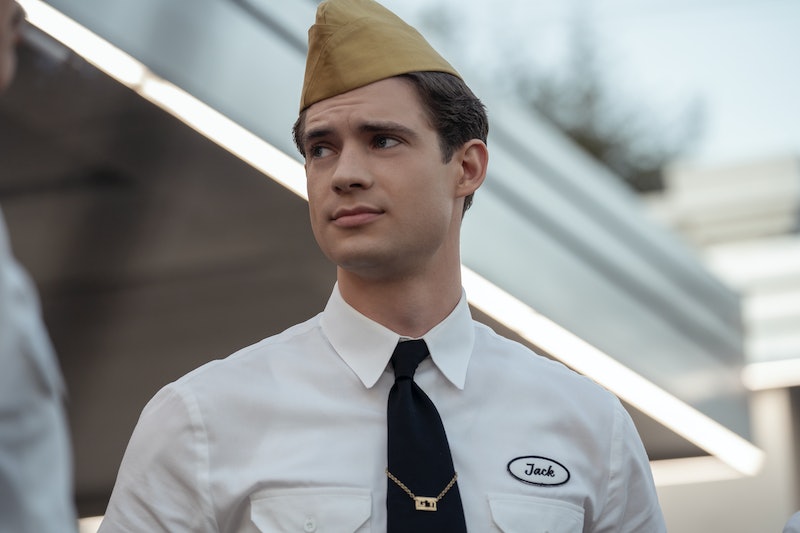 A reimagined version of Golden Age Tinseltown, Ryan Murphy's Hollywood stars David Corenswet as Jack Costello, a World War II veteran who moves to Los Angeles in the hopes of making it big. According to Entertainment Weekly, his character is based on an amalgam of several real actors, including Marlon Brando, Montgomery Clift, and James Dean, who were dubbed "the young mavericks" of their time because they pioneered method acting and became symbols of post-war nonconformity.

"My character has a certain optimism, a lack of jadedness, at least at the beginning of the series," Corenswet told EW of Jack, who moves cross-country with his pregnant wife after hearing of the opportunities Hollywood has to offer in a cinema advertisement. Fresh out of war and classically handsome, Jack believes he'll be plucked out of obscurity if he can just land a gig as a studio extra. But he never gets picked. When he tries to convince a casting director to choose him out of the sea of actors who line up every morning, she snaps that a good-looking kid like him with no acting training is "a dime a dozen."

Soon broke, Jack ends up working at Ernie's Golden Tip Gasoline, a gas station that doubles as a secret male brothel. He eventually sleeps with a casting director, who gets him a part on a Cecil B. DeMille picture, thus kickstarting his career.

This differs significantly from Brando, Clift, and Dean's backstories. Brando was expelled from military academy and studied method acting with New York acting coach Stella Adler before starring in A Streetcar Named Desire. Clift started acting with a local theater company when he was just 13, and had become a popular Broadway star by the time he moved to Hollywood at 25. Dean was also classically trained: he majored in drama at UCLA, but after starring in the school's production of Macbeth, dropped out of school and moved to New York City to study at Lee Strasberg's Actors Studio before making the jump into film.

Jack does, however, embody the "new masculinity" that Brando, Clift, and Dean made famous: emotionally vulnerable and socially aware, yet physically imposing men. Brando, who ran in the same circles as Clift and Dean but outlived both of them, looms the largest in this respect. According to Today, the actor was the bridge between "the heroic screen purity of earlier stars such as Cary Grant, Gary Cooper and Henry Fonda" and a generation of "gritty, conflicted anti-heroes played by the likes of Robert De Niro, Jack Nicholson and Dustin Hoffman."

It seems like Jack's character leans more toward the former, but if he loses his optimism as Corenswet implied, that may change as the season goes on.