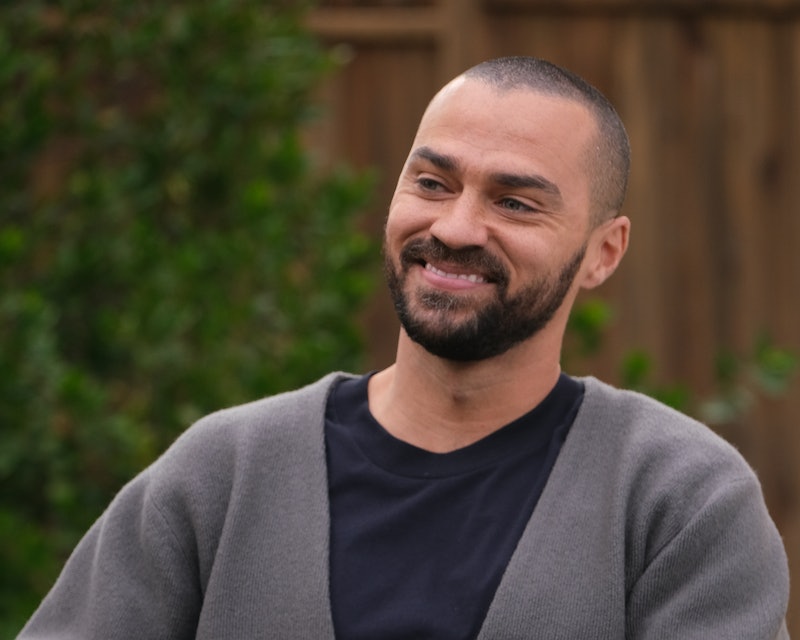 Spoilers ahead for Grey's Anatomy Season 17, Episode 15. After 12 memorable seasons, Jackson Avery (Jesse Williams) said goodbye to Grey’s Anatomy in the May 20 episode. As expected, his farewell was a flashback-filled walk down memory lane. In addition to sharing some final moments with Meredith, Bailey, Richard, and Jo, Jackson also took some time to remember those who came before him, and the parallel scenes really hit fans in their feels. Among the characters we saw in the memory montages for his big sendoff were Cristina, Alex, Mark, Callie, and, of course, April, who is moving to Boston with him.

First, Jackson had to submit his resignation (with, uh, one day’s notice) to Bailey and Richard. Explaining that his trip to see his dad made him realize the kind of man he never wants to be, he launched into the first of several emotional speeches. “The two of you showed me the opposite,” he told them, as throwback scenes flashed on the screen. “Example after example of not giving in to hopelessness and despair and consistently resist complacency. You get up over and over and over again and fight. I learned the kind of surgeon, the kind of father, the kind of person I wanted to become from you. I’m always gonna be grateful for that.”

Jo — in her new pink OB/GYN scrubs — was next up on Jackson’s farewell tour, and she handled the news much better than expected. In fact, she even took the opportunity to shade her ex-husband Alex, who ghosted her for Izzie and only told her about it in writing. “Well, thank you for saying goodbye in person and not in a letter,” Jo said. The two also joked about all the casual sex they’d had over the past few months before leaving each other on good terms. “I’m thanking you for being a good friend, especially when I really needed one,” Jackson told Jo. “And, also, the sex is worth a thank you.”

Now that Meredith is fully awake, Jackson broke the news to her in the hospital room she was preparing to leave. “So, I win,” an amused Meredith joked. “I’m the last man standing. It was you and me from our residency class. Everyone else has either abandoned me or died. We were the only two left.” After some more reminiscing, a tearful Meredith sent Jackson off with these words: “You go give ‘em hell, Avery.” His reply? “Well, thanks for showing me how.”

That wasn’t their last scene together though. Meredith somehow convinced Jackson to be her getaway driver after helping her avoid a celebratory clap-out as she was finally discharged from Grey Sloan after beating COVID. It was only fitting that their final onscreen moments involved laughter, as Jackson raced Meredith across the hospital parking lot in a wheelchair before driving her home.

The last minutes of the episode featured more classic Jackson memory montages that paid homage to his legacy. Among them, of course, were his naming Grey Sloan Memorial, and, yes, even some gratuitous shirtless scenes, too. His work still wasn’t done though, as Koracick convinced Jackson to give him a job in Boston and finally attempt to put his white privilege to use against systemic racism in a meaningful way.

While Jackson’s departure truly is the end of an era, as Bailey and Richard both noted, he’s now their boss, and that means he could return to Seattle at any time.

More like this
'GoT' Star Emilia Clarke Says She "Just Can't" Watch 'House Of The Dragon'
By Brad Witter
'Friends' Star Maggie Wheeler Offers Support To Matthew Perry After Reading His Memoir
By Alyssa Lapid
'RHOSLC' Star Jen Shah Refuses To Do A Post-Sentencing Interview With Andy Cohen
By Brad Witter and Jake Viswanath
Turns Out George Clooney Is A Huge Fan Of This Classic British Game Show
By El Hunt
Get Even More From Bustle — Sign Up For The Newsletter
From hair trends to relationship advice, our daily newsletter has everything you need to sound like a person who’s on TikTok, even if you aren’t.