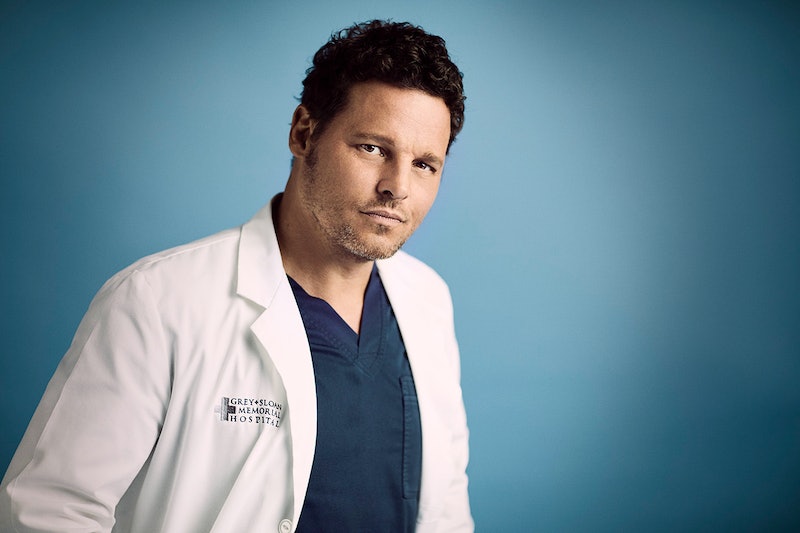 Spoilers ahead for Grey's Anatomy Season 16. "There's really no good way to say goodbye." Those are the final words Meredith spoke in Alex Karev's farewell Grey's Anatomy episode, but they just as easily could have been ABC's subtle defense of this storyline. As it turns out, Alex is living "on a freakin' farm in nowhere Kansas" (his words) with — wait for it — Izzie Stevens and — wait for it again — their 5-year-old twins Eli and Alexis. Wait, what? The only thing that softened the utter shock of this wild scenario: Fans predicted Alex and Izzie had reunited before March 5's "Leave a Light On" aired. Apparently some theories are just crazy enough to be true.

Aside from the fact that Alex had ghosted his friends and left his wife Jo, maybe the worst part of the whole situation was how he went about breaking the news. The episode began with Meredith, Jo, and Bailey all receiving handwritten letters from Alex, with Baldwin City, KS listed in the return address. (Baldwin City's population is just over 4,600, by the way.) "The last thing on earth I want to do is hurt you," he wrote to all the women. "I'm leaving. I already left, actually. I'm gone."

Alex acknowledged to Meredith (whose envelope listed "Evil Spawn" as the sender) that he "deserves to be called an ass," among other things. But, as he self-deprecatingly justified: "You know me, any way to take the easy way out."

The thing about his cop-out excuse is that it might have been true of the "Evil Spawn" Karev of early seasons. The 2019 Karev that took over and began turning around an entire hospital? Not so much. This could have been one of the biggest character regressions of Grey's' 16-season history, but Karev nevertheless tried to lay out his case for defection in his dispatches back to Seattle.

The episode only showed Alex (and actor Justin Chambers) in nostalgic flashback clips from his 16 seasons on the Shonda Rhimes-created medical drama. He did, however, narrate in voiceover what he'd written in his letters. Here's how Alex answered all your burning questions.

How Did Alex & Izzie Reconnect?

"I swear it's not about work or you or Jo," he claimed to Meredith. "It's about me. I left, and I'm with Izzie." But how did they even get back in touch? Well, Alex explained that when he'd asked several Grey Sloan alumni — including Callie, Arizona, April, Addison, and, yes, even Cristina — to write character testimonials for Meredith's medical board hearing, he'd also reached out to Izzie. (This was also Chambers' final new Grey's appearance after abruptly exiting the series on Jan. 10.)

After referring to Izzie as his "person" and "one perfect thing," Alex admitted he actually used the trial as an excuse to call his ex-wife (played by Katherine Heigl) who left Seattle a decade ago in Season 6. "I wanted to know if she was alive and well," he wrote. "I wanted to hear her voice."

Wait, How Do Alex & Izzie Have Kids Together?

Alex further explained to Meredith that when he called Izzie on her behalf, he heard a little voice in the background singing a song he remembered from childhood about "greasy, grimy gopher guts." He asked her if she was a mother. "Izzie got quiet. For so long, she was quiet," Alex recalled. "And it turns out, they're my kids, Mer. Izzie's and my kids. She had our kids."

Said kids are five-year-old twins named Eli and Alexis. As both Alex and the episode's flashback reminded viewers, Izzie's cancer had destroyed her eggs, and so she had fertilized embryos frozen. Alex said he'd signed legal papers saying Izzie could do whatever she wanted with them, and after she settled in Kansas, she apparently did just that.

Alex described his son and daughter to Meredith as "hilarious and stubborn as hell, just like Izzie." He said they're both also brilliant and want to be doctors, naturally. "Oh, I love them, Mer. With every inch of me, and every cell. And I get to be their dad," Alex added.

What Has Izzie Been Up To?

Alex revealed that Izzie is now a surgical oncologist at a local Kansas hospital. Oh, and Alex wasn't mad she kept their kids a secret because he noted he was just "grateful she made them."

What About Poor Jo?

As if Jo hasn't been through enough trauma in her life, to now be dumped by her husband in a letter? Stone cold. "I'm sorry. You deserve more than a letter. And this right here, this cowardice, this letter, it's officially the worst thing I've ever done," Alex said before a series of Jolex clips played. "But it's about me, Jo, it's not about you. It's not what you deserve. You deserve and have earned so much better than this." No kidding.

After calling Jo brilliant and brave, he continued: "You loved me for exactly who I was, and I loved you. I love you. Maybe it's not fair to say that, but it's true. What's also true is I'm in love with Izzie. . . . I can't lie to you and pretend the truth isn't the truth: that I love you, and I love Izzie. But if it was just me missing her or nostalgia or whatever, I would've been able to walk away and come back to you. But Izzie had my kids. And I know you get what that really means. I know you, of all people, understand why I can't just leave now."

Invoking their own tough childhoods, he added that he hopes Jo loves him back enough to allow him to give these kids the family neither of them had. Alex enclosed signed divorce papers, and informed Jo he was leaving her everything, including his shares in Grey Sloan. That gesture aside, it's no wonder he admitted he just couldn't face Jo, whom he also assured was not just the "lets get a dog girl."

Alex signed off: "I wish getting everything I always wanted didn't have to hurt you in the process. But I can't lie to you, and I can't come home. I'm not coming home, Jo. . . . You deserve everything good in this life, Jo. I hope you find so much better than me. Thank you. I'm sorry. I don't know how to end this. I don't want to. Goodbye."

What Did Alex Say To Bailey?

With a majority of the explanation handled in the Meredith and Jo portions of the episode, Bailey's letter mostly served as a walk down memory lane, beginning with their contentious early relationship. "You kicked my ass and asked more of me than anyone," he wrote, ultimately crediting Bailey with helping him "grow the hell up."

He continued, "If I started the whole list of everything I learned from you, I would never stop writing, and right now my hand hurts." So, even he had to admit that a goodbye letter was "lame and small compared to everything" she'd done for him.

All seemed to be forgiven, however, as Bailey later revealed to Ben that she'd given Alex a recommendation for a chief of pediatrics position at a Kansas hospital.

For his part, Webber, whom Alex had stayed in touch with from "Iowa," shared his take on the Alex situation during an emotional speech at an AA meeting. With his hand tremors seemingly worse than ever, the former chief told the group that the letter he woke up to from Alex fell in line with the pattern of people he loves disappearing that he can't seem to make stop.

He ultimately excused what he thought had been Alex's mistake, admitting he, too, had been in love with two people at the same time. He also regretted missing the chance to see Maggie grow into an adult. "But he up and left with only a note and an apology and that's it, not considering that I might want to say goodbye as a teacher, as a colleague, as a friend," Richard shared.

Many Grey's fans also wished they'd had an opportunity to properly bid Alex adieu. And this episode wasn't it. Seeing him raise a family with Izzie would have been a nostalgic dream, had Jo not been in the picture. And nobody is buying that Alex would ever ghost the rest of his Grey Sloan family either. The character just deserved so much better. For now, though, it looks like Jo is at least going to be OK. After Link told her she's his hero, she replied, "Mine too." The she buttoned her lab coat, and got back to work.

And just like that, another Grey's era sadly came to an end.

More like this
The Best 'Grey's Anatomy' Intern Moments, From MAGIC to Glasses
By Grace Wehniainen
A New 'And Just Like That' Table Read Pic Confirms A Key Character's Return
By Jack Irvin and Grace Wehniainen
Netflix Reveals First Look At Wednesday In The 'Addams Family' Spinoff Series
By Bustle Editors
Shonda Rhimes' Net Worth Makes Her One Of The Wealthiest People In TV History
By Hugh McIntyre
Get Even More From Bustle — Sign Up For The Newsletter