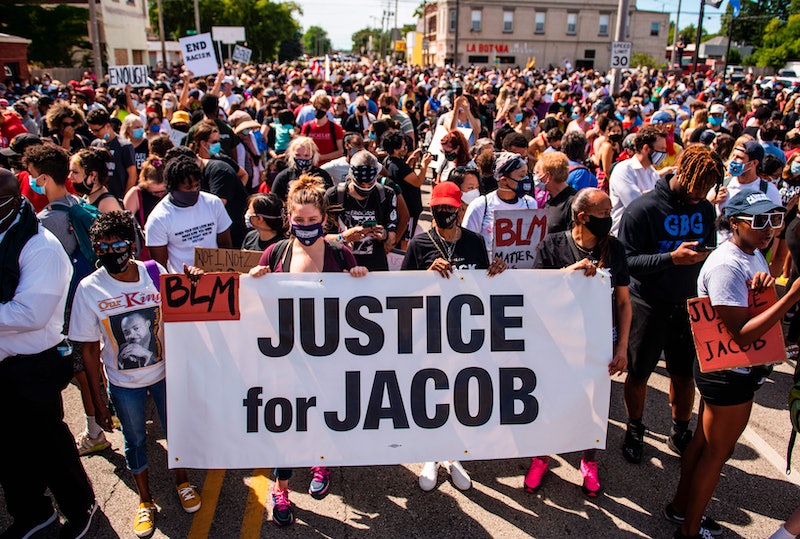 This year's Video Music Awards is coming at a very fraught time in the United States. Not only has the coronavirus pandemic claimed over 180,000 American lives, but the country is also in the midst of a nationwide reckoning with police brutality. On August 23, 2020 Jacob Blake was shot multiple times by a white police officer. While he survived the shooting, this year's VMAs made sure to pay tribute to Blake through a commercial supporting the Black Lives Matter movement.

The message of the commercial was a simple yet powerful one. "Jacob Blake is a father, cousin, son, uncle, human, another black person shot. 7 times by a cop. In front of his children. When will enough be enough. Demand justice now. Text 'Jake' to 55156," the commercial read.

As CNN reports, Blake was on a street in Kenosha, Wisconsin, when he attempted to break up a fight between two women. When the Kenosha police to arrived, another man, Raysean White, was across the street filming Blake's altercation with the police. As White's video shows, Blake walked away from the women fighting and then was shot by the police seven times in the back as he leaned into the car. In the vehicle were his three sons, ages 3, 5, and 8, according to CNN.

Blake suffered multiple injuries including gunshot wounds to his arm, spinal cord, kidney, and liver. "He had a bullet go through some or all of his spinal cord, at least one bullet. He has holes in his stomach. He had to have nearly his entire colon and small intestines removed," said Patrick Salvi Jr., an attorney representing Blake's family.

More like this
Everything To Know About Taylor Swift’s 10th Studio Album, 'Midnights'
By Grace Wehniainen and Jake Viswanath
Ed Sheeran’s Surprise Gig Included An Iconic Britney Spears Tribute
By Bustle Editors and Darshita Goyal
Lizzo Twerks While Playing James Madison's 200-Year-Old Crystal Flute Onstage
By Radhika Menon
Stormzy Made A Passionate Speech About The Importance Of Diversity
By El Hunt
Get Even More From Bustle — Sign Up For The Newsletter

This article was originally published on Aug. 31, 2020