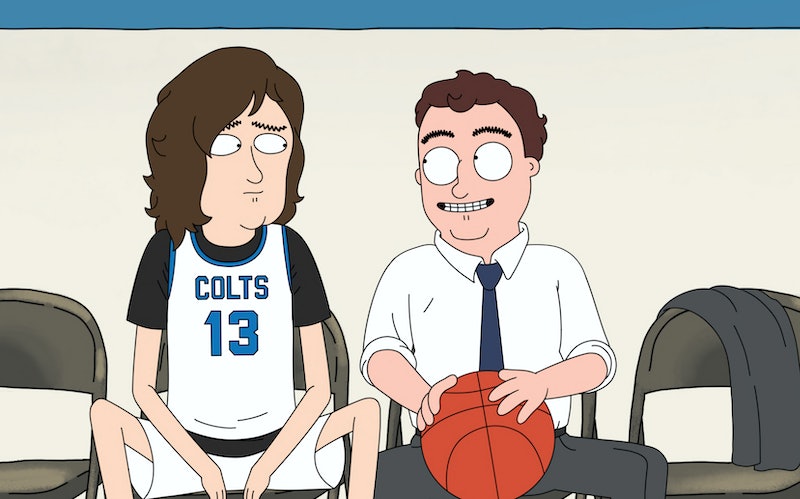 It's time to come terms with the fact that there will never be another Nick Miller; Jake Johnson's Hoops character is proof of it. Though the foul-mouthed high school basketball coach is similar to New Girls' Nick in many ways, Ben doesn't have any of the qualities that made the gruff bartender so inexplicably charming. Instead, he seems more like a mix between Coach and Winston (who, lest we forget, began New Girl as a professional basketball player). That is, if they were also both utterly depraved jerks.

It's clear from Episode 1 that Ben is not a lovable grump. Sure, he tells his players that he "cares too much," but he also verbally abuses the referee, has no qualms about hiring a sex worker in order to incentivize the very-much-underage Matty to join the Colts, and makes waaaayyyy too many dick jokes. At one point, Ben even digs up his ex-wife's dead horse in order to intimidate the high school ethics teacher into passing one of his players. When they can't saw off the head, they put the entire animal in the teacher's bed.

Still, he does share a few key characteristics with Nick. Let's break them down.

Where New Girl starts out, Nick is still recovering from his awful split from Caroline. Ben is similarly in denial that his marriage to Shannon is over, even though she's now dating his best friend, Ron.

Both Nick and Ben tend to drink too much (and Ben seems to misuse drugs too; he tells his players how much he loves doing crack cocaine).

Nick started New Girl as a law school dropout and aspiring novelist. It took him until Season 2 to find the energy to finish writing Z Is for Zombie, and until Season 6 to write an actually good book, The Pepperwood Chronicles. Ben, meanwhile, wants to get promoted to coaching college basketball (a rite of passage in Kentucky) and eventually move on to the NBA.

Ben's father is a basketball legend and now successful steakhouse owner who doesn't think his son will ever amount to anything. In New Girl, Nick's father was a conman prior to his death (and subsequent Elvis-themed-funeral) in Season 2.

Ben might not be from the Windy City, but his dream is to coach the Chicago Bulls. And, as you might recall, Nick is from Chicago.

The Inability to Function Under Pressure

We all remember the classic New Girl moment when Nick moonwalks away from Jess to avoid an awkward moment. Ben also has a habit of losing his cool when things get too difficult. Which leads us to...

Ben's temper might be a little more pronounced than Johnson's New Girl character, but both men are maladjusted and have a hard time processing their feelings.

The Complete Lack of Finances

Neither characters are what you'd call "well off." In Hoops Episode 1, Ben has $85 to his name (and a cracked, first generation iPad), while Nick famously doesn't have a bank account or wallet.

For some reason, Ben is obsessed with a movie called Little Man Tate (perhaps because it's the only movie downloaded to his iPad). Nick, of course, loves the song "Cotton Eye Joe," which is equally as terrible and yet still endearing. Rest assured, the No.1 Jake Johnson character remains unrivaled.

More like this
Everything To Know About Netflix’s 'Never Have I Ever' Season 4
By Jack Irvin and Gabrielle Bondi
Here’s Everything Coming To & Leaving Netflix In August
By Jake Viswanath
Neil Patrick Harris’ 'Uncoupled' Character Will Make A Life-Changing Decision In A Potential Season 2
By Brad Witter
At 14, Melissa Barrera Was Planning Her Quinceañera & Falling In Love With Musical Theater
By Gabrielle Bondi
Get Even More From Bustle — Sign Up For The Newsletter