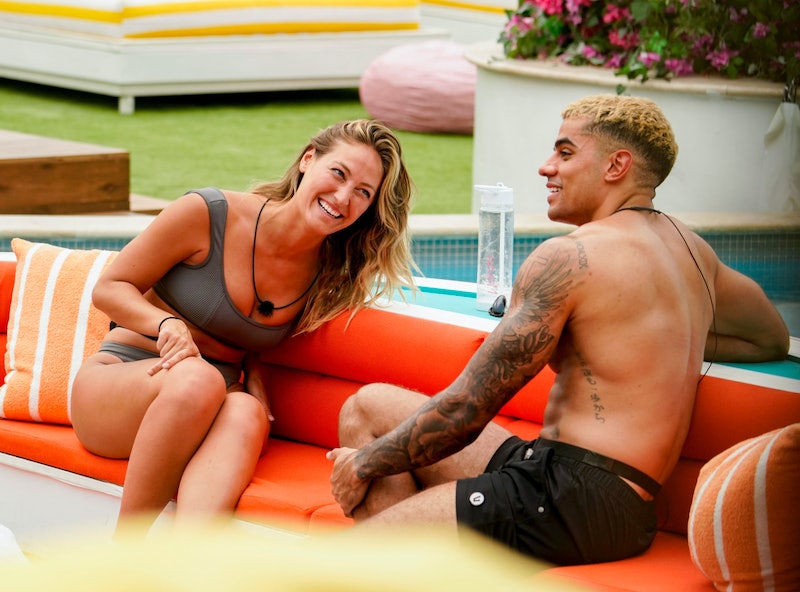 The Casa Amor twist to Love Island Season 2 has majorTemptation Island vibes, and newcomer Jalen Noble is already at work, luring Moira — or maybe Mackenzie? — into his absurdly chiseled, tattooed arms. The 27-year-old admitted that his looks channel the bad boy type, and so far, it's paying off. Here's everything to know about Jalen.

He was initially gunning for Moira, but that may have changed.

Although some fans find his attraction to Moria confusing, Jalen said in his intro that they "would make beautiful babies," and immediately approached her upon entering the villa, calling her "the most beautiful girl" he's ever seen. Meanwhile, Moira just got comfortable with Calvin after booting her first partner James off the island.

Meanwhile, Mackenzie has suddenly decided to free herself from being voluntarily chained to Connor and has taken an interest in Jalen, too — meaning that if both ladies decide to ditch their current partners, they could be in direct competition for Jalen. They should call this show Love Triangle Island.

In his intro, Jalen said he's from Nashville, but his CBS bio says his hometown is Columbus. According to his LinkedIn, he works in San Jose, California, but his most recent Instagram photo pre-Love Island was taken in Nashville. Before that, he was posting from Utah and San Francisco.

He works in software sales.

Jalen's LinkedIn says he's an inside account executive at Nutanix, a position he has held since May. Before that, he was a sales development representative and team lead at the same company. From June 2017 to May 2019, he worked for Essilor, a lens manufacturer in Cleveland, Ohio.

In 2012, he accepted an offer to play cornerback for the Air Force Prep Academy. After a year of attending school there, he attended Miami University, where he earned a degree in communications and psychology, per LinkedIn.

He and his little brother look more like twins.

If you just glanced at their pictures, you could easily get Jalen and his little brother Jared confused. Jared is running Jalen's Instagram while he's in the love bubble, and has some impressive content on his own grid.

"I always like to think that I'm the person that stands out in the crowd," Jalen said in his Love Island intro. "I believe that I'm the sexiest person in every room I walk into." And that's why he's the perfect fit for Casa Amor.