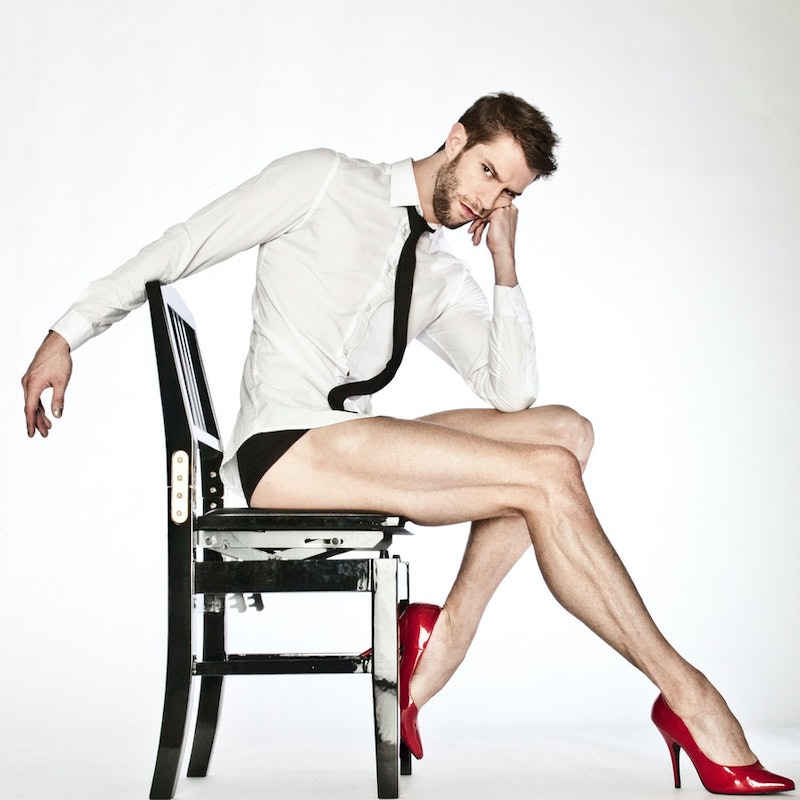 “I’m so happy you suggested this place,” says James Whiteside as he arrives to Nowhere, a queer dive bar in Manhattan’s East Village. “I come here all the time.”

It’s a grotesquely warm evening, typical for July, which alone could explain why Whiteside is slightly sweaty. But he’s also come straight from rehearsals, as a principal dancer and choreographer at American Ballet Theatre. So his attire — a sleeveless tee and elastic shorts — is fitting. It’s also entirely appropriate for a place like Nowhere, where the 37-year-old seems to be a regular. It’s the sort of bar where you need to yell over Spice Girls or Alanis Morissette to order a Jack and Ginger, which to Whiteside, makes Nowhere feel like somewhere, a place to blend in when you need a break from standing out.

Earlier this week, Whiteside released his debut book, the memoir Center Center. His everyday life revolves around ballet — but if you want to read about his glitzy career as a marquee name for America’s premier classical dance company, this memoir isn’t it. Instead, Center Center is a candid, sometimes crass account of a life lived parallel to his dancing, from performing in drag for New York nightlife icon Susanne Bartsch, to watching a friend’s random hookup penetrate himself with a double-sided dildo using his feet. (At one point, he writes his adolescent fixation with male genitalia is akin to “obsessing over Cool Ranch Doritos.”) But mostly, it’s an examination of Whiteside’s queer identity through the lens of a dancer, friend, son, lover, or whichever alter ego he’s inhabiting that day. His stream of consciousness makes it feel like he’s in the room, reading aloud, laughing and licking Dorito dust off his fingers.

Off-stage, the Connecticut native is also popular among RuPaul’s Drag Race fans, as his former partner Dan Donigan — known by his drag persona Milk — appeared on the show’s sixth season. Their 12-year relationship only makes a cameo in the book. (The pair split amicably less than a year ago.) Most of the book was written while they were still together, Whiteside says, and though there was an opportunity to add pages post-break-up, he was processing in real time. Plus, some things are “nobody’s goddamn business,” he says. “People want to know. They ask me [about Milk] all the time, and it’s fine, I get it. I’d be curious too. But it’s not what I want to do right now.”

To celebrate Center Center, Whiteside opens up about everything that didn’t make it into the book, from choreographing pop stars to the state of American ballet.

The book reads very conversational and unpretentious, especially with how candid you are about your queerness. It feels like an antidote for this very classical art form.

Well, speaking of being “super gay,” take me back to your second summer at the ABT Summer Intensive. It was your first summer living in New York, and you’d just come to terms with your sexuality.

I don’t remember all that much, but I still get super nostalgic because it was such a vibrant time. There were equal parts fear and freedom. I was a teenager [who] had just come out, and I wanted to experience everything, but I was also scared of absolutely everything.

It’s ironic that male ballet dancers are often stereotyped for being queer, yet the roles available to men in the classical repertoire are hypermasculine.

Classical ballet can be really rigid. In order to accept queerness into ballet, there have to be queer stories being told. I dance for a very classical ballet company, and our bread and butter are the classics, as well as the modern American classics, like works by Twyla Tharp and Mark Morris. My greatest wish for ballet is to start telling more inclusive stories. I’m a cis-gay man, and I want to play a cis-gay man in a role at some point before I retire. And if I have to make it myself, then so be it.

Over the past three years, I’ve gotten my foot in the door as a choreographer. The first ballet I choreographed for ABT had hints of queerness. There is a male-male-female throuple, essentially. But even doing that scared me, because I didn’t want to be blacklisted for opportunities.

I’ve seen that piece, New American Romance, and it’s great. It’s a shame that ABT doesn’t do more stuff like that. Do you worry they’re pushing away younger audiences?

Being an insecure audience member can be quite painful. By “insecure,” I mean feeling like you don’t know what you’re watching, don’t know the etiquette, or don’t know how to interpret it. And that makes me sad, because that’s the opposite point of art. And ballet has movement, music, acting, storytelling, and aesthetics. What’s not to like?

Which is a nice segue to drag, because dance plays such a big role.

Oh my God, I saw the best drag show last night. I went to Cherry’s in Fire Island, and a few drag queens were doing a show called “The Assassins.” The whole thing was choreographed top to bottom. It was incredible.

What are your favorite queer spaces in the city?

I have so many. I love this place, [Nowhere]. I love the Phoenix, Julius, and all the traveling parties, like Horse Meat Disco. There’s also a bar in Brooklyn called Good Judy, which is great. And I was just at 3 Dollar Bill for Ty Tea last Sunday. It was ridiculous. Not to mention the Susanne Bartsch parties.

Can you tell me about how your alter egos started?

They all feel like different cloaks I put on, but they’re all parts of me. I feel a bit phony compared to my “day job,” which I’ve been training for since I was 9. But I don’t know, maybe that’s why I use the words “alter ego.” Right now, I’m inhabiting this “writer” alter ego. I’d love to have more time to dedicate to JbDubs, my pop star alter ego, and Ühu Betch, my drag persona.

Does your writer alter ego have a name?

Not yet. I’ll keep you posted.

What’s one thing you haven’t done yet that you’d like to accomplish?

I’d like to write a novel, or adapt one of my essays for television or film. I’d also like to choreograph a full-length classical ballet with queer interest, and to continue making dance for pop music.

Well, now I’m dying to know: Which pop stars do you want to work with?

[Laughs.] Britney Spears, Janet Jackson, Normani, Tinashe, Beyonce. I’m just giving you top-tier people because #dreams. Dua Lipa as well. I’d love to see her do something different than pop. What I make is not regular LA pop-star choreography, and that’s what we need, something different.

That’s how your memoir operates as well, taking a traditional form and turning it on its head. Was that purposeful?

Well, I didn’t write it for other people. It’s great if it does help people, but that’s not what I had in mind when I wrote it. It’s me exploring themes of human experiences, like family, friends, work, creativity, expression, love, hate, violence. I wrote about things I felt strongly about. I felt obligated to write a [traditional] ballet memoir, but I didn’t feel comfortable doing that. So instead I wrote a weird, fantasy version of that. I don’t think everyone is going to like it, but I’m OK with that.