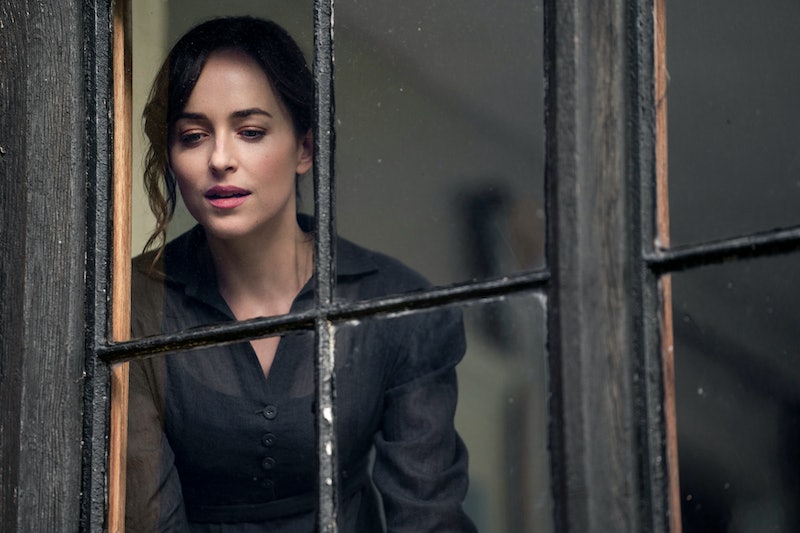 Despite powerful performances from Dakota Johnson and Cosmo Jarvis, the Netflix adaptation of Jane Austen’s Persuasion hasn’t received the warmest of welcomes. Some fans of Austen were perturbed with the story being “Fleabag-ed,” while other critics weren’t so happy about the modern tones. Regardless of your feelings about the film, all of the attention has probably perked your interest if you’ve yet to check out the original material. If you want to learn more, keep reading for an insight into how the Persuasion book ends.

Austen’s Persuasion follows Anne Elliot, the middle daughter of baronet Sir Walter, who’s found himself in a bit of a sticky financial situation. In order to lower their debts, they rent the family hall to an Admiral and his wife. Anne happens to be familiar with the couple, as she accepted a proposal from the wife’s brother, Navy Captain Frederick Wentworth, when she was 19. However, her snobby family persuaded her to call it off, deeming Wentworth to be of a lower class due to his lack of fortune or social standing.

Having not seen each other in seven years, both Anne and Wentworth happen to be single. While their reunion seems like the perfect opportunity to rekindle their lost romance, it’s not as simple as that. Wentworth seems more drawn to Louisa Musgrove, the sister of Mary’s husband Charles Musgrove Jr. The naval captain soon proposes to Louisa after a fall, and Anne is left to deal with the mixed emotions of what could have been.

Anne soon captures the attention of William Elliot, who she later discovers is her cousin and the heir to her family’s inheritance. Elliot floats the idea of marriage to Anne, which she later learns is a rouse for him to become the sole heir of the family fortune. As the drama unfolds, Wentworth is reintroduced to Sir Walter’s wealthy circle. But during this time, Louisa decides to reject Wentworth’s proposal (poor guy) and marry Captain Benwick instead. Obviously, Anne and Wentworth are once again drawn to each other, but he believes she and William are an item. In order to win her back, Wentworth writes a romantic letter, professing his love for her. He tells Anne that she pierces his soul and that he’s in “half agony, half hope” for them to be together. “Tell me not that I am too late, that such precious feelings are gone forever,” he writes. “I have loved none but you.”

After receiving that swoon-worthy letter, Anne takes him back, and the book ends with her family finally approving their engagement. However, as neatly as their romance is tied up, this wasn’t the original ending of Persuasion. According to Austen’s nephew J.E. Austen-Leigh, the author believed her initial conclusion was “tame and flat,” “awkwardly managed,” and “clumsy.” The original ending consisted of Wentworth requiring Anne to persuade him to express his love for her, and there was no letter involved. Thankfully, Austen reconsidered this, and gave the world one of the most romantic love letters in literature.