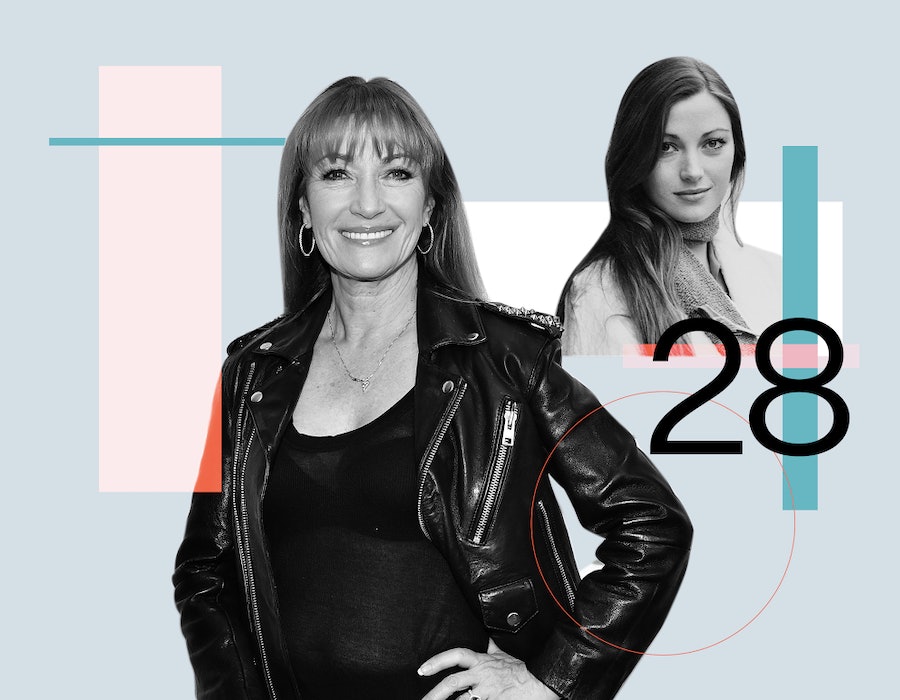 In Bustle’s Q&A series 28, successful women describe exactly what their lives looked like when they were 28 — what they wore, where they worked, what stressed them out most, and what, if anything, they would do differently. This time, Jane Seymour remembers 28 as one of the most impactful years of her career.

Jane Seymour didn't waste any time getting famous. By the time she was 20, the actor was cast in the career-making role of Solitaire in the 1973 James Bond movie Live and Let Die. Nearly five decades later, Seymour still fondly recalls her Bond Girl audition. "I walked into [the producer's] office in a fur coat and hat and he said, ‘Take off your coat! Take off your hat,’" Seymour, 69, tells Bustle with a laugh. "My hair came tumbling down and that was it. He offered the role to me on the spot."

Post-Bond, Seymour's star continued to rise throughout her 20s, culminating in what she considers to be one of the most prolific spans of her career. It was during this peak that Seymour co-starred alongside Christopher Reeve in Somewhere in Time, appeared on Broadway in Amadeus, and earned a Golden Globe for her work in East of Eden. But at the time, there was a type of work that Seymour always felt was missing from her repertoire. "I knew I could play comedy, I just wasn’t ever offered any," she says. "I’d had a couple of slightly comedic moments — maybe in a Murphy Brown or Dharma and Greg — but it wasn’t until I did Wedding Crashers that people went, 'Wow, yes, she’s funny!'"

It was playing Wedding Crashers' naughty mother of the bride in 2005 — deftly delivering lines like, "Call me kitty cat" — that breathed new life into Seymour's career in a way she hadn't experienced since landing the part of Solitaire. In the time since, she's starred in a spate of comedies like Sandy Wexler, The Kominsky Method, and the recently released The War with Grandpa. "Not many people get to do both [drama and comedy] so I feel very grateful," Seymour says of her late in life comedic renaissance.

Below, Seymour reflects on marriage, befriending Christopher Reeve, and winning a Golden Globe.

How were you feeling about your life and career at 28?

I was making a beautiful movie called Somewhere in Time with the late Christopher Reeve. It was one of the most magical experiences I’ve ever had. We were on Mackinac Island [in Michigan], which is a place where no cars are allowed. We were issued bicycles with numbers on them as vehicles and the crew had to go around in horses and carriages. Chris Reeve had a little tiny airplane out and we used to take our bicycles and go to the airstrip and escape for a little bit on our days. We became lifelong friends while making this movie, and we were friends until the day he passed away.

What were your goals at that time?

I [was] married and I wasn’t doing that very well, so I was trying to figure out how I [could] have a man in my life and if I would I ever want to have a family. At that time I definitely didn’t want to be a mom. I thought moms were boring and becoming one would probably mean the end of my career. But shortly after that, I met David Flynn [Seymour's third husband and the father of two of her four children] and I was pregnant when I was 30 and gave birth when I was 31. I realized that having it all was what I really wanted. I wanted to have children and a career.

"I would ask myself more clearly, 'Why did your relationship not work? Were there any similarities between the last one and the next one?'"

Is there anything that you would tell yourself to do differently back then?

Not get married so quickly. [Otherwise] I’ve noticed that every time something bad or difficult has happened in my life, that challenge has always turned into a unique and extraordinary opportunity. I don’t think I would be who I am today if I hadn’t been through the bad stuff. But I think I would ask myself more clearly, "Why did your relationship not work? Were there any similarities between the last one and the next one?"

Be my own person. I was very much a people pleaser all the time and I was very concerned with what other people would think of me, or what the director wanted. I’m much freer now. I love to come in and try all kinds of different things and be much braver about my work. If a director says, "Do it upside down and backward," I’m not afraid to try it. I feel much more comfortable in my own skin now than I did then.

Has there been a moment in your career when you’ve felt like you made it?

When I opened on Broadway in Amadeus and it was a huge hit overnight. That same week [my film] East of Eden came out and I got amazing reviews and won a Golden Globe for that. And Somewhere in Time came out to the worst reviews known to man, but it ended up being one of the most beloved romantic movies ever. I’d always been told you could either be a theater, film, [or] TV actor. You could never do all of the above. And in one week, everything came out at the same time, [which I loved] because I always liked breaking down barriers.

What do you think your 28-year-old self would think of your life today?

I’m still in shock as my 69-year-old self. I could never have conceived of the places I’ve been or the people I’ve met. My parents both survived World War II. So to be able to do [the 1988 miniseries] War and Remembrance and spend nine months of my life traveling all over Europe and reenacting what happened to my parents and their family, and to have them with me while I was doing it... [It's one of those] experiences in my life where I just go, "Wow. That was me?"

More like this
At 28, Lesley Manville Was Acting, Picketing, & Singing Kate Bush Songs
By Olivia-Anne Cleary
Here’s Everything Coming To & Leaving Netflix In August
By Jake Viswanath
How Director Quinn Shephard Turned Dylan O’Brien Into A “Viral Weed Blogger”
By Samantha Leach
What’s New On Netflix: 'Never Have I Ever' & 'Indian Matchmaking' Return
By Arya Roshanian
Get Even More From Bustle — Sign Up For The Newsletter