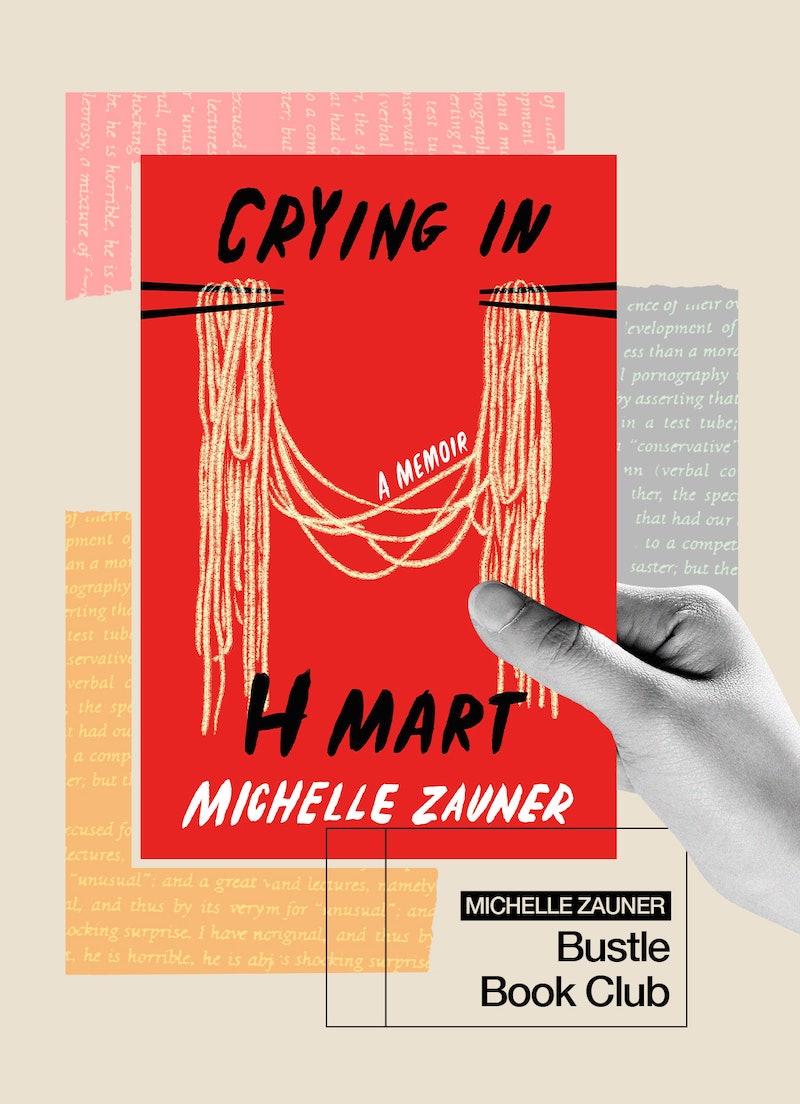 When Michelle Zauner first began writing her debut memoir, Crying in H Mart, she turned to an unlikely source for inspiration: cookbooks. But Zauner had her reasons for poring over Maangchi and David Chang’s recipes. Crying in H Mart, as its title suggests, is about food as much as it is grief; it’s at once a reflection on Zauner’s late mother’s battle with cancer and a celebration of her mom’s native Korean cuisine.

Zauner introduces the link between her loss and her hunger almost immediately, and returns to it throughout. When the reader first meets her, she’s weeping by the banchan refrigerators in the Korean grocery store H Mart, longing for the taste of her mom’s soy-sauce eggs. After she moves home to care for her mother, she busies herself by making Korean comfort food. Once her mother passes, she obsesses over fermenting kimchi.

“I love Han Kang's The Vegetarian and that really inspired me to use food as a thematic vehicle,” says Zauner, who plays indie rock under the aptly food-centric stage name Japanese Breakfast. “To explore food and our relationship to it can get quite ugly. I think that's part of what made coming back to [Korean food] such a story of redemption.” Zauner also credits Anthony Bourdain’s A Cook's Tour, M. F. K. Fisher’s The Gastronomical Me, Ruth Reichl's Tender at the Bone, and Eddie Huang's Fresh Off the Boat as touchstones.

After years grieving the loss of her mother, Zauner is beginning to see the light — and professional success. Crying in H Mart became an instant New York Times best seller following its April publication. She released her joyful third record, Jubilee, to rave reviews. Now, Zauner is hard at work giving her story the screenplay treatment, as MGM has officially acquired the rights to bring it to the big screen. Mastering the craft of screenwriting has been a challenge for the singer-songwriter-turned-memoirist, but one that she’s relishing. “I love finding my unique voice within a set of rules,” she says. “Like a pop song structure, [screenwriting] is a set of rules that I enjoy and I’m interested in putting that puzzle together.”

On learning about structure & form through George Saunders:

Right now I’m reading George Saunders’ A Swim in a Pond in the Rain. He teaches a Russian literature course at Syracuse and in the book he incorporates six or seven Russian short stories and he analyzes them. He talks a lot about structure, form, and how tight that has to be in short fiction. It really brings me back to the nerdy short fiction workshops of my youth. I'm also reading Why Karen Carpenter Matters by Karen Thompson and I've been really enjoying that.

On being a “garbage mouth”:

I went to Korea twice while I was writing this book and I ate a lot. I’m such a garbage mouth. It was fun because I got to revisit a lot of things that I was writing about. There's a section about Hong Kong Market and I was like, “Guess I have to go there and eat!” I was eating a lot of black bean noodles and fried chicken. I remember having to write the scene where my aunt and I are ordering Korean fried chicken and [I was] writing down everything that was happening as I was eating it. So mostly I tried to eat a lot of the stuff that I was writing about in the book.

On procrastinating with chess:

Lately I’ve been [slacking off with] Chess.com. I play a lot of blitz chess, [which is] five minute games of online chess. Growing up I was really into playing chess and was in a chess club from fourth to seventh grade. I participated in tournaments and stuff like that. But I'm not very good anymore.

On the Daruma she kept on her desk:

I like to be surrounded by books. I remember there was a big moment where my editor told me I should write more about the weather. I was like, “What the hell is she talking about?” Then I spent the next couple of days just rereading Marilynne Robinson's Housekeeping and underlining all of the passages about the weather and learning how to make that effective. So that was on my desk.

On sprinkling the book with Japanese Breakfast Easter eggs:

Japanese Breakfast fans might discover there are quite a few borrowed lines [in the memoir] from songs that I've written that really distill an emotion for me. It was fun getting to revisit those and then unpack them as a scene. For instance, there's a line in “Rugged Country”: “It's a heavy hand where I wear your death.” [That’s] about what it was like to watch my dad take my mom's wedding ring from her finger and the weight of that on my hand for the first time. Or there's a song on Soft Sounds from Another Planet called “Till Death” about my husband and how supportive and essential he was during this really difficult time.