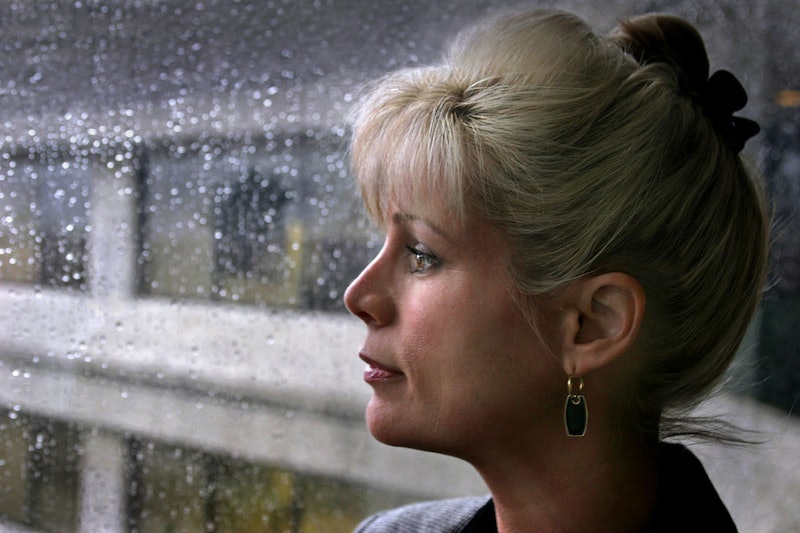 Over three decades after being convicted for the murder of his first wife and their two young daughters, Jeffrey McDonald found a new wife. According to the Washington Post, he married Kathryn MacDonald in 2002, and she believes her husband is innocent.

As chronicled in FX's new docuseries Wilderness of Error, Jeffrey was convicted for killing his family in 1979 and has been in prison ever since. He's always maintained his innocence in the case, instead claiming the murders were carried out by four home intruders. But it wasn't until 2005, at the encouragement of Kathryn, that he considered applying for parole. "I didn't want to go to the hearing," Jeffrey told People magazine in 2017. "But I was newly married — three years at the time with a loving and supportive wife. And I had new attorneys offering encouragement saying, 'Times are changing and you never know.'"

However, Jeffrey was denied parole because that would mean claiming responsibility for the crimes, ultimately dashing Kathryn's hopes of having a "normal" marriage. "I certainly didn't see myself married to someone in prison," she told the Washington Post in 2005. "There's no glamour in it. It's not fun at all. I hate it. But I love the person."

According to the Post, Kathryn and Jeffrey's relationship began after she wrote him a letter in 1997. She believed he was innocent and wanted to help with his case. Along the way, they fell in love. "When we realized that we were the single most important person to each other, then it seemed like a no-brainer," Jeffrey told the Post of their decision to get married.

In the 18 years since their wedding, Kathryn has spent a lot of time trying to get Jeffrey released from prison. In 2007, she even visited the mother of Helena Stoeckley, a woman who Jeffrey believes was one of the four intruders allegedly in his house that fateful night. Stoeckley died in 1983 and was never charged in connection to the crime. Though she made conflicting statements about her level of participation in the murders, her account was considered unreliable because she was a heavy drug user. Kathryn told the Fayetteville Observer that she also thinks Stoeckley was involved, and that Stoeckley's mother allegedly confirmed so.

However, that didn't lead to any progress in Jeffrey's case, so Kathryn tried a new tactic earlier this year. She tweeted directly at President Donald Trump to ask for help. "You can save my most deserving husband's [life]," she pleaded, citing Jeffrey's age and the coronavirus pandemic as reasons that he needed to be released from prison. Trump didn't respond.

Kathryn told the Washington Post that she's been saving the bottle of wine from her wedding celebration "for when Jeff comes home." Nearly 20 years later, she's still waiting for that to happen. But it's clear she has no plans to give up. "I know my husband is innocent. He is the most honorable person I have ever known," she told the Observer. "If I ever had one scintilla of a doubt about Jeff. ... I wouldn't be where I am. He is innocent, and justice has to mean something."