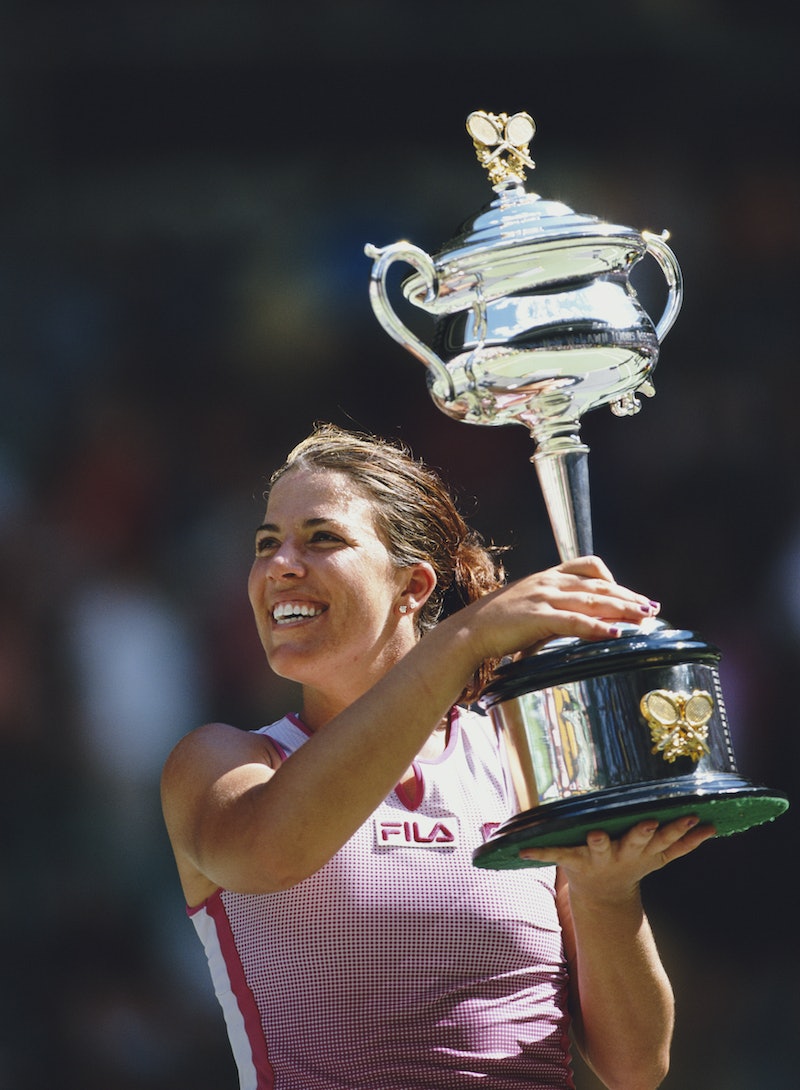 King Richard is already winning over critics and audiences alike, in no small part thanks to Will Smith’s performance as Richard Williams — the film’s titular father-slash-tennis coach. The movie explores how Richard shaped Venus and Serena Williams’ tennis careers — and how he guided them away from the sport’s established path. Another then-prodigy, Jennifer Capriati (played by Jessica Wacnik in the film), is shown as an example of a player who followed that established path — and suffered for it.

Capriati was already respected on the court by the time the Williams sisters turned pro in the mid-’90s. Throughout their respective careers, the young champions continuously battled each other. While Venus remained undefeated against Capriani in their four head-to-head matches, the latter’s rivalry with Serena was more of a nail-biter — over their 17 matches, Serena won 10.

While Capriati had success on the court, she also struggled with burnout and depression, which subsequently led to unwanted media attention for drug possession and shoplifting. She took a few hiatuses as a pro, and ultimately retired from the sport in the early aughts — but not before securing three Grand Slam titles and an Olympic gold medal.

So where is Capriati these days? Below is an overview of Capriati’s career, and a look at what she’s up to now.

She set a number of records in her early career.

Capriati began playing tennis at age five, and played her first professional match at only 13 years old, in 1990. Months later, she entered the French Open for the first time and reached the semi-finals; by the end of the year, she become the youngest player to ever rank in the Women’s Tennis Association (WTA) top 10. In 1991, she became Wimbledon’s youngest semifinalist in history, and in 1992, she won a gold medal at the Barcelona Olympics.

Capriati was inducted into the International Tennis Hall of Fame in 2012, when she was 26 years old.

Her talent was admired by both the public and seasoned tennis professionals.

When seeing Capriati playing for the first time, lauded tennis star Pam Shriver remarked to the International Tennis Hall of Fame: “I played 12 years and I can remember watching this match shaking my head … I couldn’t believe what I was watching. This was really the beginning of the whole power era in women’s tennis.”

Mary Joe Fernandez, who lost to Capriati both times they played head-to-head, also stated to ITHF: “She was fun to watch because she was always happy and giggly and just killing everybody from the start.”

Throughout her career, Capriati struggled with personal issues.

Even as she was making headlines for her success, Capriati lived with depression and wrestled with burnout. In 1993, she was charged with a citation after “accidentally” shoplifting a $15 ring at a mall kiosk in Tampa, Florida. The following year, she was arrested and charged with marijuana possession. During the ’90s, her performance on the court suffered, and she took breaks from tennis.

According to Shriver, Capriati struggled with the spotlight. “It was almost paparazzi-like, when she first came onto the scene,” Shriver told ESPN in 2012. “She was just a kid and she was top four in the world. There were a lot of adults who couldn't handle that pressure, that's just tough for a young person, especially someone going through adolescence, and she fell off the rail.” According to the U.S. Olympic Committee, her ordeal inspired the WTA to introduce new regulations, which forbid players aged 13-16 from compete on the circuit full-time.

Capriati staged a comeback in 1999, winning her first title since 1993. In 2001, she’d win the Australian Open and the French Open, and once again rank in the WTA top 10. But in 2004, she injured her wrist and shoulder, and was unable to continue playing professionally.

After her tennis career came to an end, she continued to struggle at times. In 2010, an accidental overdose on prescription medication landed her in the hospital, though she soon made a full recovery. Three years later, her former boyfriend alleged that she was following him, and she was soon hit with battery and stalking charges — charges that were eventually dropped, on the condition that she complete 30 hours of community service and minimal anger management counseling.

Not much is known about her life today.

These days, Capriati stays out of the spotlight. Her Twitter profile, which seems to be her only public social media account, has only been updated once in the last three years, when she posted a tribute to her late father.