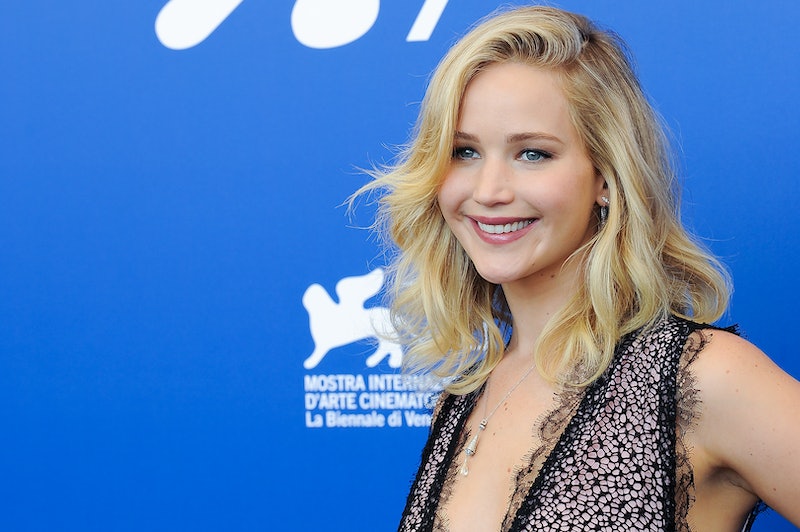 No topic is off-limits in a conversation with Jennifer Lawrence — including her past (and current) political beliefs. During a recent appearance on the Absolutely Not podcast, Jennifer Lawrence revealed she used to be a "little Republican," until Donald Trump became the leader of the party in 2016. The always candid Oscar winner told host Heather McMahan that growing up in Kentucky influenced her political beliefs, explaining that she "grew up Republican."

"My first time voting, I voted for John McCain. I was a little Republican," she continued. Lawrence also noted that due to her upbringing, she was able to "see the fiscal benefits of some of the Republican policies," even though she didn't always agree with the party's stance on social issues. However, the actor said she adjusted her political views as she got older, and when Trump was elected in 2016, that "changed everything" for her.

"This is an impeached president who's broken many laws and has refused to condemn white supremacy, and it feels like there has been a line drawn in the sand," Lawrence continued, referring to many of Trump's biggest controversies while in office. "I don't think it's right ... it just changes things for me." She also unfavorably compared Trump's administration to the presidency of Barack Obama, stating that in her opinion, people could "go days, maybe weeks, without thinking about the president because everything would generally be okay" between 2008 and 2016.

Since Trump was elected in 2016, Lawrence has been extremely open about her distaste for him and her disapproval of his administration. "Do not let this defeat you — let this enrage you!" she wrote in an essay for Vice shortly after the election, encouraging people who voted against Trump to continue to work towards equality. "Let it motivate you! Let this be the fire you didn't have before. If you are an immigrant, if you are a person of color, if you are LGBTQ+, if you are a woman — don't be afraid, be loud!"

The following year, Lawrence told Oprah Winfrey that she would want to meet Trump, in order to have the opportunity to throw a martini in his face. "I've got a pretty good speech. And it ends with a martini to the face," she said with a laugh, per The Hollywood Reporter. "I have something to say for all of them. I watch different characters on the news, and I'm like, 'You just wait.'" Though she didn't reveal what she hoped to tell those "characters" if she got the chance, Lawrence did admit that her thoughts were "not nice. You wouldn't want me to say it to you."

During that interview, the Oscar winner also opened up about the ways the political climate has pushed her to become more active and outspoken, particularly when it comes to women's rights. "My political passion has almost turned into an obsession," Lawrence said. "I mean, I don't think you ever do feel settled, [but] as soon as you feel settled with your home and your personal life, you're looking at the world and going, "How in the hell do I fix this? What do we do?"

In October, Lawrence publicly endorsed Trump's opponent, Joe Biden, during a conversation about the importance of voting for V Magazine. "Voting is the foundation of our democracy and our freedom. And I would consider this upcoming election the most consequential of our lifetime," she told the outlet. "I'm voting for Joe Biden and Kamala Harris this year because Donald Trump has and will continue to put himself before the safety and well-being of America. He does not represent my values as an American, and most importantly as a human being."

Update: On Oct. 27, Lawrence took to Twitter to shed some more light on her political views. "I would like to clarify my voting record, which is the subject of many circulating headlines," she tweeted. "I grew up in a republican family and voted for John McCain in 2008, but through Obama's presidency, and growing up to realize I was voting against my rights, I am proud to say I am a Democrat."