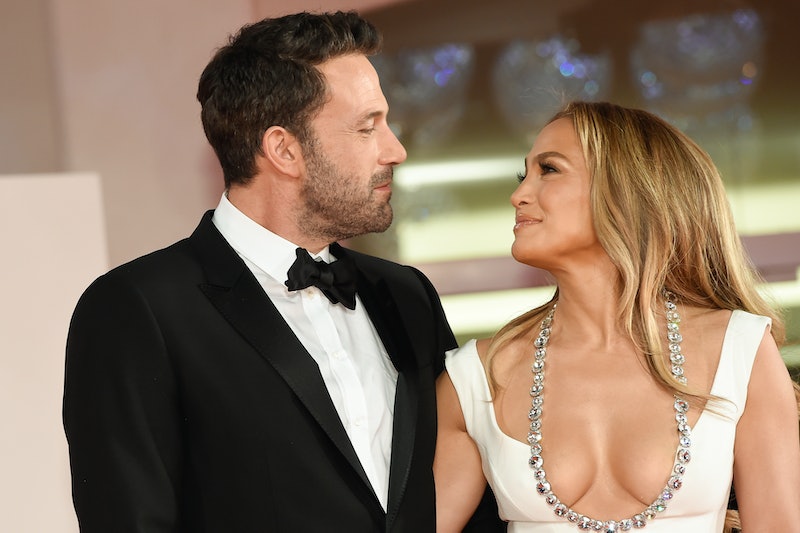 It’s official: Bennifer got married! After originally getting engaged in the early noughties and later splitting, partly due to the pressures of fierce media attention, Ben Affleck and Jennifer Lopez finally reunited last year after 17 years apart. And over the weekend, J. Lo revealed that she and Ben Affleck got married at Las Vegas’ famous Little White Chapel. “Last night, we flew to Vegas, stood in line for a license with four other couples, all making the same journey to the wedding capital of the world,” she wrote in her fan newsletter, “On The JLo.” Lopez went on to call the evening the “best night of our lives.”

According to documents from Nevada’s Clark County Recorder’s Office, the singer has legally taken Affleck’s surname. It’s said to cost $435 dollars (£363) to change your name in the state of California, where the couple resides. As it turns out, that’s always been the plan. In a newly-resurfaced Access Hollywood clip from around 20 years ago, J. Lo can be seen showing presenter Pat O’Brien around her home. It appears to have been filmed at some point after Lopez and Affleck first got engaged in 2002. While the singer is showing off her cookery skills, O’Brien asks if she’ll change her surname after getting married. “My name will be Jennifer Affleck, obviously,” she said, adding elsewhere that she’ll still stick with her current surname as a stage name. “J. Aff doesn’t quite have the same ring to it,” she laughed.

READ NEXT: What Is J. Lo’s Net Worth? She’s The Richer Half Of Bennifer

The now-reunited couple originally got engaged in November 2002 after Affleck popped the question at his family’s house in Boston. Speaking to the ABC network at the time, J. Lo revealed that her beau set up a surprise picnic in the house, and when she walked in, her song “Glad” was playing. Affleck then read her a letter he had written, containing all of the reasons that he loved her. “Will you marry me?” he then asked, proposing with a pink diamond ring. “I was just like, ‘Oh God, it can’t be pink on top of it.’ That was just too much for me to handle,” she said. The following year, however, they postponed the wedding due to “excessive media attention” and split for good in 2004. “I think different time, different thing, who knows what could’ve happened, but there was a genuine love there,” she told People in 2016.

Though both Lopez and Affleck went on to have other relationships — J. Lo had two children with ex-husband Marc Anthony, while Affleck had three children with his then-wife, actor Jennifer Garner — they stayed in touch, and continued to speak highly of each other to the press. “We don’t have the kind of relationship where she relies on me for advice,” Affleck told The Hollywood Reporter in 2012, “but we do have the kind of relationship where there’ll be an email saying, ‘Oh, your movie looks great.’ I respect her. I like her. She’s put up with some stuff that was unfair in her life, and I’m really pleased to see her successful.”

When the pair eventually confirmed their reunion on J. Lo’s 52nd birthday last year, fans were made up for the couple. “I feel so lucky and happy and proud to be with him,” Lopez told People this year, speaking about their reconciliation. “It’s a beautiful love story that we got a second chance. We’re older now, we’re smarter, we have more experience, we’re at different places in our lives, we have kids now, and we have to be very conscious of those things. We’re so protective because it is such a beautiful time for all of us.”