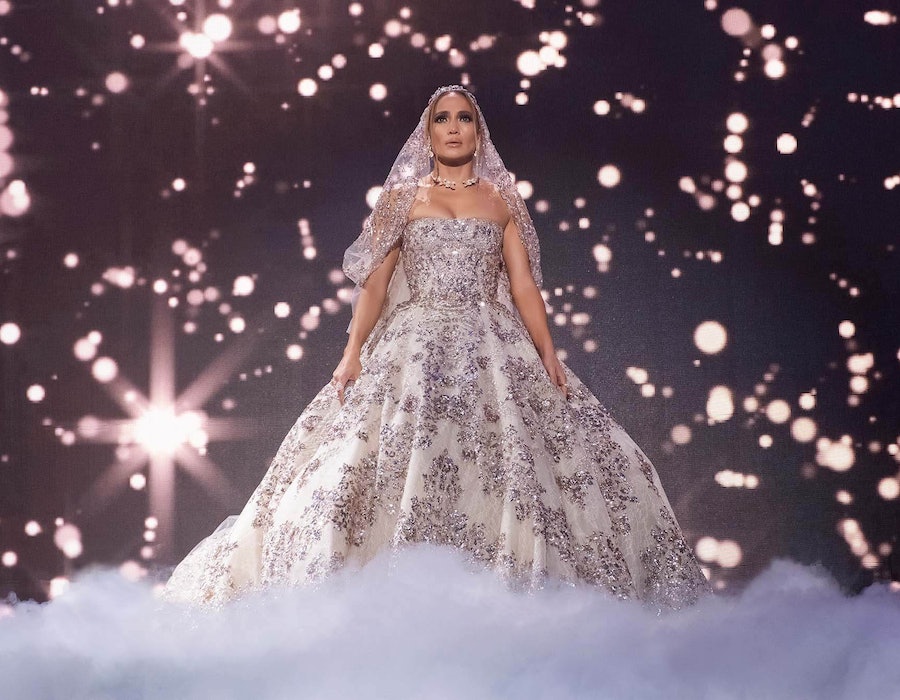 At the opening of Marry Me, Jennifer Lopez’s alter-ego Kat Valdez sits in her palatial Manhattan apartment, surrounded by mountains of gifts celebrating her impending nuptials. The camera pans over a sea of purses as assistants announce more presents — an opulent diamond necklace from a jewelry designer, a whole stove from a fan. The message is clear: Kat Valdez wants for nothing, because Kat Valdez is really, really, really rich.

The character is a far cry from Lopez’s previous rom-com roles, which have exclusively been working-class women — parts that draw on her background as a working-class kid from the Bronx. Characters like Maid in Manhattan’s Marisa Ventura, a maid who finds romance with a senator, or The Wedding Planner’s Mary Fiore, a wedding planner who falls for a well-off client, don’t challenge the traditional rom-com framework: a woman marrying a wealthier man. (Think Elizabeth Bennet, who can’t inherit property, marrying the uber-rich Mr. Darcy.) But that’s not the only difference. In Marry Me — which Lopez produced as well as starred in — she not only plays a rich woman, she plays a famous and powerful celebrity, designed to remind viewers of the star herself. If Lopez has historically endeared herself to the audience by playing “relatable” characters, Marry Me asks audiences to root for her: J.Lo, the A-lister, the megastar, the icon. And root for her they did. The film earned $11 million at the still-depressed box office, while also streaming on Peacock.

Lopez knew viewers were ready to see her have it all, because she herself laid the groundwork for it. Her efforts began following the release of 2019’s Hustlers, a film often cited as her career-best performance, and another project she produced. Suddenly, it was cool to love Lopez — and rather than resting on her laurels, she capitalized on the critical acclaim to launch a fascinating PR project: reclaiming and rehabilitating the earlier phases of her career, which weren’t always well-received by the public. American culture is currently obsessed with redeeming once-maligned women, but Lopez’s engagement with her own history as a public figure is unique. And the public is eating it up.

In the fall of 2019, Lopez walked the Versace runway in a version of the (in)famous green Versace dress she’d once donned at the 2000 Grammys, prompting an effusive response on social media and in the press. The next year, she performed at the Super Bowl halftime show, claiming space for her songs — once dismissed as pop fluff — at the very center of American culture; in 2021, she’d sing at the presidential inauguration, joining the ranks of the country’s greatest musicians. And then she started dating Ben Affleck again. The first time around, there was a sense that Affleck, a white Oscar winner, was slumming it by dating a Puerto Rican actor and musician from the Bronx. In a “Primetime Live” report, Diane Sawyer described Lopez as “the racy, impetuous pop star with that flashy ex-boyfriend” and Affleck, by contrast, as “brainy”; Conan O’Brien joked that he’d use his late-night show’s “cleaning lady” to stand in for Lopez in a sketch about the couple. But now, the public’s response to Bennifer has been overwhelmingly positive, partly because tabloid culture has shifted, partly because the couple’s rekindled romance inspires nostalgia in millennials who grew up reading about their relationship, but largely because Lopez and Affleck are in the driver’s seat this time, directing how the story is being received by the media and by fans. Plus, where Affleck was once seen as the more impressive half of the couple, dating Lopez now makes him look good. Their relationship obviously wasn’t planned as a facet of Lopez’s public persona, but Lopez and Affleck haven’t hesitated to reference their earlier relationship, playing into the narrative that their fans adore.

In some ways, Lopez’s career didn’t turn out as she’d imagined it. “It’s just 20, 25 years of people going, ‘Well, she’s not that great. She’s pretty and she makes cute music, but it’s not really this and that,’” she said in a recent Rolling Stone profile. “There is an inner circle, like, ‘We are the great artists.’ And then there’s the pop artists.” Lopez is a pop artist, but that hardly makes her lesser than. Her movies may not all be masterpieces, but who cares? Most films pale in comparison to Lopez’s greatest achievement: creating the celebrity we all know as J.Lo, the person we recognize in Marry Me — a savvy, tough-as-nails pop icon who the public continues to cheer on, even as she ascends to higher and higher heights.