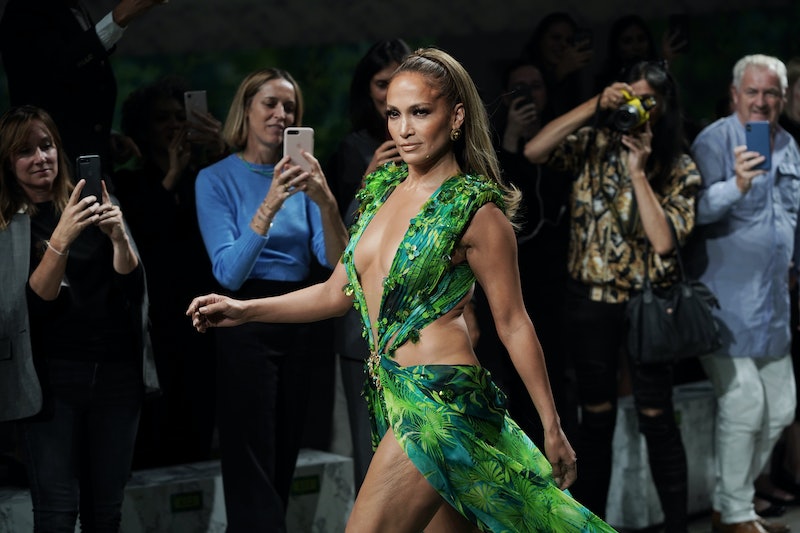 Jennifer Lopez is an undisputed fashion icon. When it comes to red carpet style, the megastar doesn't play around. The single definitive look that made Jenny From The Block a fashion figure was her iconic 2000s Grammy Awards green Versace number. Now, almost 20 years later, J.Lo closed out Versace's Spring 2020 runway show in Milan in a reimagined version of the palm tree gown.

At the end of the Sept. 20 show, the voice of Donatella Versace came over a loudspeaker, asking "Google" to show her pictures of "that green Versace dress," according to Women's Wear Daily. Images flooded the screens at the show, with Versace’s voice then asking to see the real thing. Lopez then took the runway to a standing ovation in a modern version of the dress.

The 2020 dress includes more beading and side cutouts than the 2000 version, and forgoes long sleeves in favor of a shoulder-bearing silhouette. But the print, deep v-neck and brooch closure (albeit a different brooch) stayed the same.

When J.Lo first wore the dress in 2000, it was infamously salacious for the time — and people around the nation wanted to see it. The demand for a view of "the dress" was so high that it is actually responsible for the creation of Google Images. In 2015, former Executive Chairman of Google Eric Schmidt recounted that user demand for photos of the dress inspired the creation of the feature.

"At the time, it was the most popular search query we had ever seen," Schmidt wrote in the post for Project Syndicate. "But we had no surefire way of getting users exactly what they wanted: J­.Lo wearing that dress. Google Image Search was born."

But Lopez almost didn't even wear the green Versace dress to the award show two decades ago. In a video posted earlier this year to her YouTube channel, Lopez says her stylists advised her not to wear the dress because it had already been worn before by three other women — including Donatella Versace herself. But Lopez said she tried on the dress anyway. Her longtime manager and friend Benny Medina's reaction made up her mind for her.

“I put on the green dress and come out and Benny goes, ‘That’s it. That’s it. Don’t even talk about it. That’s the dress,'" Lopez says in the video.

The actor, who was filming The Wedding Date at the time, didn't even realize how controversial her dress was until stepping on the red carpet.

“It was a frenzy," she says in the video. "The flashes started going in a way that it’s not usually. There was an extra kinetic energy there. I was like, What the hell is going on? I had no idea it was about this dress.”

Lopez finally realized her dress was a BFD when she walked onto stage to present an award later that night, and her outfit got a standing ovation.

“All of a sudden, again, a slow murmur and everybody starts clapping. We get an ovation for just standing there!” Lopez says in the video. “In that moment, that dress became something that people still reference.”

Now, almost two decades later, J.Lo has again stopped a show in a jungle printed Versace gown. And she looked just as amazing this time around.

More like this
Kate Had A Solution When Tom Cruise Broke This Royal Rule At The 'Top Gun' Premiere
By Frances Stewart
10 All-Denim Outfits Inspired By Billie Eilish, Bella Hadid, & More
By Allie Fasanella
Megan Thee Stallion Just Brought Back 2004's Favorite Handbag
By Dominique Norman
Gigi Hadid Styled A Swimsuit From Her Frankies Bikinis Collab With Low-Rise Pants
By Allie Fasanella
Get Even More From Bustle — Sign Up For The Newsletter