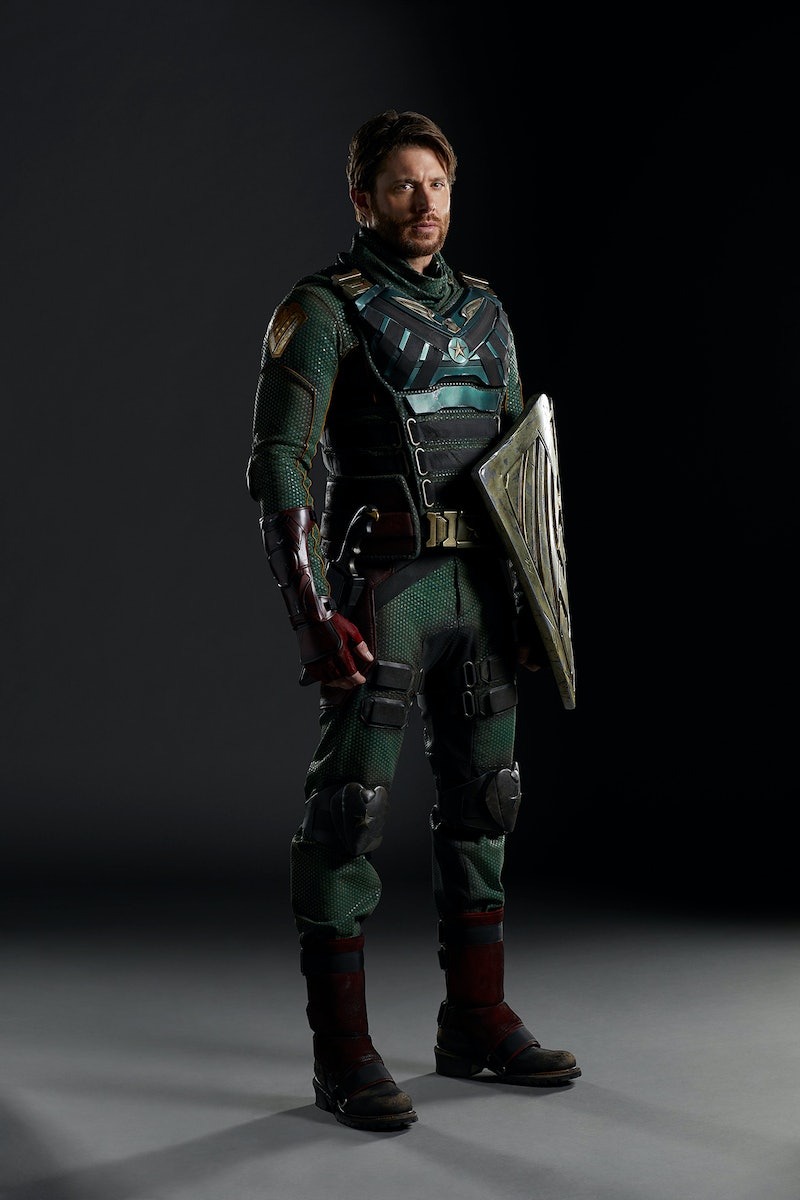 Amazon Prime TV’s irreverent, bloody superhero show The Boys is back for Season 3, and it’s introducing a whole new antagonist for The Boys to contend with. Picking up a year after the events of Season 2, Homelander has been subdued and Butcher now works for the government under Hughie. But they long for a return to their old lifestyles, so when they learn of a mysterious “Anti-Supe” weapon, they end up chasing down the legend of the first superhero by the name of Soldier Boy.

Supernatural star Jensen Ackles plays Soldier Boy, who, in a spoof of Marvel’s Captain America, reemerges after several decades in cold storage. But he’s far from being the same noble superhero that Steve Rogers was. “Soldier Boy, he pretends to fight the good fight in the spotlight, much like Homelander,” Ackles explained to USA Today. “This is a guy who believes his own hype and battles with his insecurities and internal demons, and doesn't do it very well. We're dealing with a lot of toxic masculinity, and Soldier Boy definitely gets to embody that.”

As explained in the show, Soldier Boy was the leader of the team Payback, the original group of superheroes that far predated the Seven. He was mostly active in the 1940s during World War II, and in Season 2 Stan Edgar mentions that he was one of the first soldiers who Frederik Vought used to test Compound V in the field. “Soldier Boy [was] killing Germans by the dozens,” he said. He went on to become a John Wayne-esque hero, starring in movies and off-kilter PSAs about substance misuse.

This is a change from the source material, which featured Payback and the Seven operating at the same time. In the comics, Soldier Boy was painted in a much more unflattering light. He was still Payback’s leader, but he was only elected and meanwhile longed to join the Seven and work under Homelander. He was known for his naïveté and cowardice — the cover of The Boys issue #33 is him wetting his shorts — and even his claims that he fought in World War II were rebutted by Butcher. He was tricked into having sex with Homelander, believing it was a recruitment test for joining the Seven. And as a mockery of Captain America, Soldier Boy spoke in outdated phrases and even cried out the names of American states every time he was fighting.

Does Soldier Boy Die In The Boys Comics?

It’s a bit of a fakeout. Soldier Boy and Payback are sent to take down The Boys, but he gets his nose bitten off by Butcher in issue #32. (Yes, the original comics are, unsurprisingly, incredibly gory.) Butcher then captures and tortures him, using a butcher’s knife, for information. The reader is left to assume that Butcher tortured him until he died; the next time Soldier Boy is mentioned is in issue #39, which features a cover of a newspaper showing that there will be a funeral held for him.

We find out later that the mantle of Soldier Boy was actually passed down to him, and the original man to hold the title did fight in World War II. But he was mortally wounded by German forces, and was actually killed by The Boys’ original founder, Greg Mallory (who is Grace Mallory in the show). After discovering he died, Vought simply passed on the title and clothes to new users.

But Soldier Boy reemerging from storage confirms that Ackles’ version is actually the original mantle holder and not the newer one that comic book readers got to know — making his The Boys storyline a surprise for show and comic book audiences alike. “He's a grandpa. He's from the '40s. He fought in World War II, and he's just this curmudgeon, bigoted a**hole,” Ackles told Comicbook.com. “He doesn't age, so he's this young, 40-year-old superhero who's really 80 years old or 90 years old. There's just so much material there. You'll see what I mean when you see the show, but he has a taste for people who were of his era."

More like this
Everything To Know About The 'Daisy Jones & The Six' TV Series
By Maxine Harrison and Brad Witter
Everything To Know About 'Only Murders In The Building' Season 3
By Gretchen Smail and Kadin Burnett
9 Time Catherine Cawood Was An Absolute Badass In Happy Valley
By Sophie McEvoy
'GoT' Star Emilia Clarke Says She "Just Can't" Watch 'House Of The Dragon'
By Brad Witter
Get Even More From Bustle — Sign Up For The Newsletter
From hair trends to relationship advice, our daily newsletter has everything you need to sound like a person who’s on TikTok, even if you aren’t.