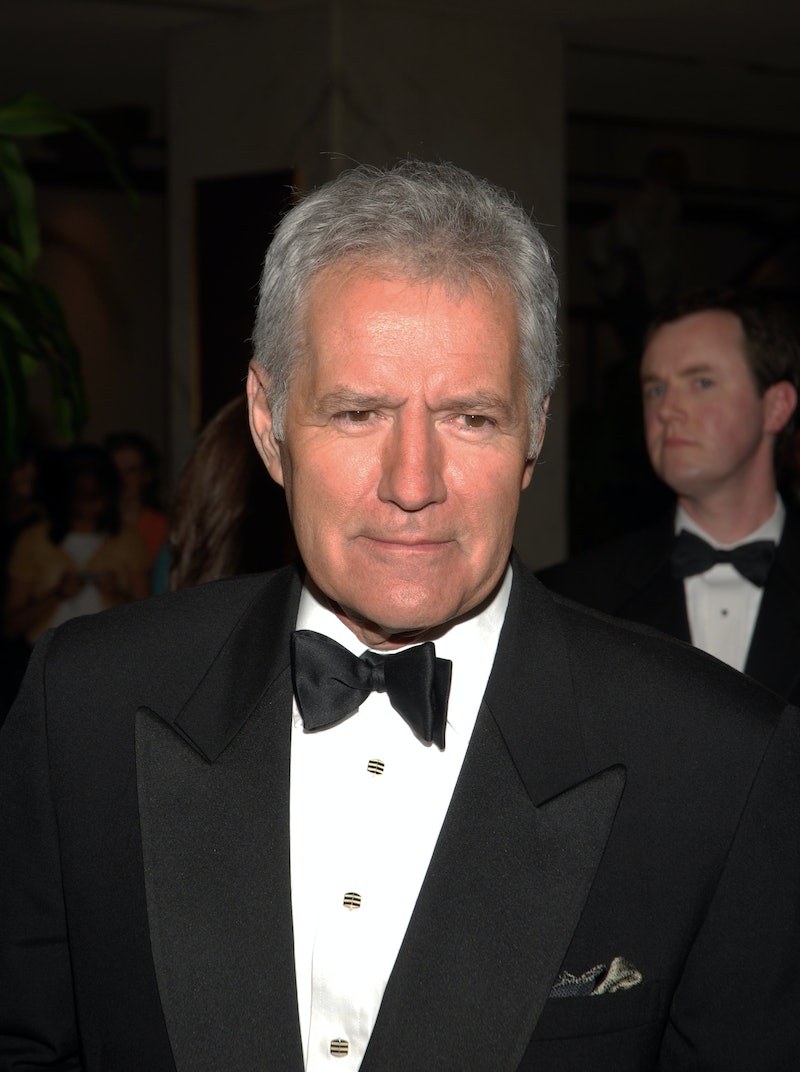 Following the Nov. 8 death of the iconic quiz show host, one Jeopardy! moment shows Alex Trebek's powerful impact. A moving clip from the Nov. 5 episode started making the rounds again on social media as fans mourned the TV legend. In the footage, contestant Burt Thakur teared up and thanked the host for helping teach him English. Thakur, who won $20,400 on the episode, acknowledged that his victory was a full-circle moment as he grew up watching the show with his grandfather.

"Any family members back home cheering you on?” Trebek asked the contestant at the end of the episode.

"You know, here’s a true story, man: I grew up... I learned English because of you," Thakur told the host. "My grandfather who raised me — I’m going to get tears right now — I used to sit on his lap and watch you every day. So it’s a pretty special moment. Thank you very much."

On Nov. 5, Jeopardy! shared the special exchange on Twitter, writing, "Alex's impact is immeasurable. Thank you for sharing, Burt!" Thakur replied to the tweet, writing, "I am incredibly grateful to have competed." The contestant also tweeted his own take on the Jeopardy! appearance, saying in part, "To win something money can't buy was an indescribable experience. To be in such a diverse contest makes me proud to be an immigrant and an #American."

Thakur's moving message for Trebek wasn't the first time a contestant thanked the host for his work. In November 2019, contestant Dhruv Gaur shared a heartfelt message for Trebek, who was then publicly battling pancreatic cancer, during a Final Jeopardy round. "We love you, Alex," he wrote as his answer.

"What is: 'We love you, Alex,'" Trebek said when Gaur's answer came up on the screen. "Oh, that's very kind. Thank you." He grew emotional upon reading the answer, but still carried out his hosting duties, informing the contestant that his lack of the correct answer would cost him $1,995.

The hashtag #WeLoveYouAlex became a trending topic on Twitter. After the episode aired, Gaur shared a few thoughts on his message for Trebek, tweeting, "I’m really glad I got the opportunity to say to Alex what everybody at the tournament was thinking." Trebek, who had recently shared he'd reentered treatment, was not expecting to receive a kind message in the form of a Final Jeopardy answer. Guar wrote on Twitter that the contestants were hurting for the host, and "when Final Jeopardy came up, I could’ve tried to puzzle it together, but really, just kept thinking about Alex, and thought he should know." He added: "I’m just very grateful I got the opportunity to say what I know everyone was thinking. Sending all the love."

Trebek is again getting all the love, with fans, former contestants, and celebrities posting tributes and honoring his legacy.

More like this
Here’s Everything Coming To & Leaving Netflix In February
By Jake Viswanath
Melanie Lynskey Plays A “Ruthless Leader” In 'The Last Of Us'
By Brad Witter
The 2023 Super Bowl Commercials Feature A 'Breaking Bad' Reunion & Missy Elliott
By Alyssa Lapid
The 12 Most Controversial & Unexpected Grammy Moments Ever
By Jake Viswanath
Get Even More From Bustle — Sign Up For The Newsletter
From hair trends to relationship advice, our daily newsletter has everything you need to sound like a person who’s on TikTok, even if you aren’t.