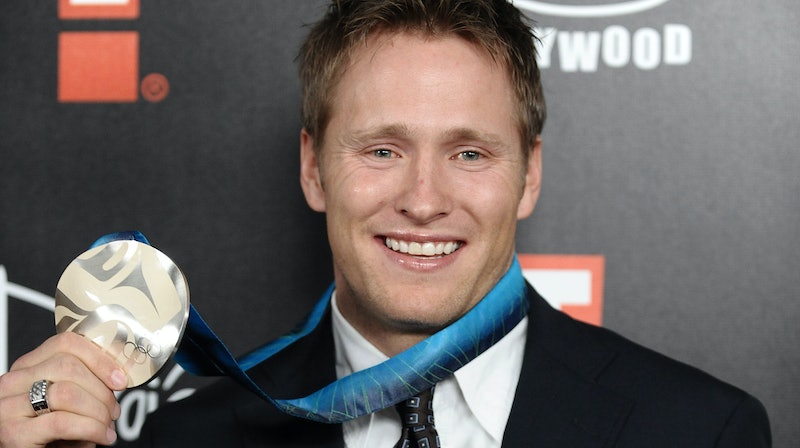 For Olympic hopefuls, the chance to compete on the international stage in the Games is often a dream come true. But that dream can also come with some devastating mental health consequences. HBO's new documentary The Weight of Gold (out July 29) examines the mental health of Olympic athletes, and one of the most tragic stories featured in the film is that of Jeret "Speedy" Peterson.

The movie, which is narrated by the most decorated Olympian of all time, Michael Phelps, features a number of famous Olympians openly discussing their own mental health struggles against the backdrop of the intensely competitive Olympic environment. These include track & field/bobsled athlete Lolo Jones, skier Bode Miller, speed skater Apolo Anton Ohno, snowboarder Shaun White, and figure skaters Sasha Cohen and Gracie Gold, among others. Also featured in a posthumous appearance is American bobsled gold medalist Steven Holcomb, who struggled for years with depression and died in 2017 after ingesting a lethal combination of alcohol and sleeping pills. And while unlike Holcomb, Peterson doesn't posthumously appear in the documentary, his story is honored.

'The Weight of Gold' trailer

Peterson was a freestyle skier who competed for Team USA at three consecutive Winter Olympics: 2002 in Salt Lake City, Utah; 2006 in Turin, Italy; and 2010 in Vancouver, Canada, where he took home a silver medal. He had a reputation as a happy-go-lucky guy, according to the documentary, but he was also struggling with depression. In the documentary, Peterson's friend and fellow freestyle skier, Jeremy Bloom, reveals that he first learned of Peterson's depression in 2009 while they were training for the 2010 games. "He said, 'I want to open up to you for a second,' and I said, 'Sure, what's on your mind?' And he started crying, and he said, 'Most days I don't want to be alive," Bloom says in the documentary. "I didn't know anything about mental health at that point. I was [caught] so off guard because I think of Speedy as somebody who's always been so happy and so successful and I didn't know how to react."

According to his mother, Linda Peterson, who appears in The Weight of Gold, the former skier had been sexually abused as a boy and had witnessed his roommate die by suicide six months before the Turin games. These events took a toll on Speedy, and he ultimately died by suicide on July 25, 2011. Those who were close to him are still struggling to cope. "I'm not angry at him for what he did," Linda says in the film. "The pain becomes insurmountable. And the pain that he was having I know, because I saw it. Your spirit is crushed, and it truly was unbearable for him."

While The Weight of Gold is a heart-wrenching look at the mental health of some of our favorite Olympians, it ends on a hopeful note. "There is a way forward. There are people in places that can help. And there are outcomes that can be really successful. We just have to change the perception that problems with mental health are something to hide," Phelps says near the end of the film. "And in a world where Olympians are leading the way forward to break down that stigma, the impact could be massive."