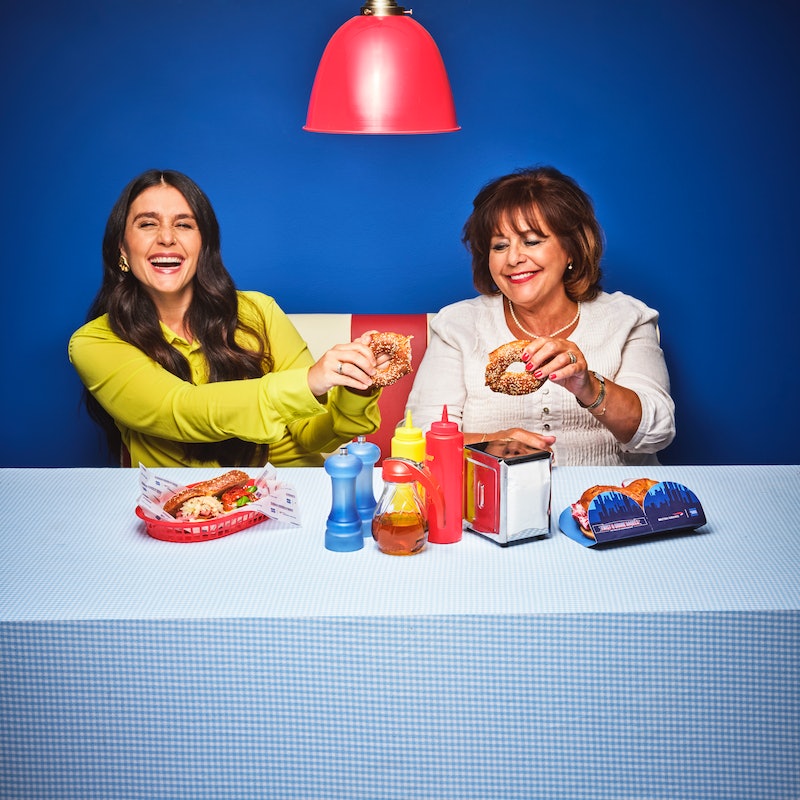 Jessie and Lennie Ware need little introduction, thanks to the mega success of their podcast Table Manners – millions of downloads, and counting, since it started in 2017. In fact, as Jessie notes, her mum is pretty much the star of the show, now. “Lennie is such a celeb these days,” she says, taking time to chat to Bustle about their mother-daughter relationship, plus the new British Airways American Express bagel they have put their name to.

While I suspect the “Twist & Share” bagel doesn’t quite compare to their chewy favourites made in Manchester – Lennie grew up there, is a staunch United fan, and both are big supporters of the city’s bagels – it does lead us nicely into discussing the joy of travel through the lens of food. “Plane food is our favourite thing, it’s almost as good as the holiday itself,” enthuses Jessie. “I looooove plane food,” Lennie agrees.

Exuding the true spirit of a star, Lennie says bagels would also feature on her rider, alongside “cosmos, or nice wine, smoked salmon, and a cheese board,” presumably in that order. When it comes to packing, her “hot comb, hairdryer, and books” are the suitcase priorities – she name checks Such A Fun Age, by Kiley Reid, as a recent read that she’s loved, while Brit Bennet’s The Vanishing Half is next on her list.

“I will never forget the summer I read Valley of the Dolls by Jacqueline Susann, and Watermelon by Marian Keyes, I was 15 I think,” Jessie picks up. “I was getting through a book a day when I was a teenager, but those days are long gone. Now, I’m lucky if I get through one in a year – but, holidays are my best time to read. I will probably read Sally Rooney’s new one in October half-term, when we are in Tenerife.”

The last year has seen Jessie release an album, What’s Your Pleasure, which had us disco dancing through lockdown; a food memoir, Omelette, full of delicious anecdotes; and a new podcast, Is It Normal, all about demystifying pregnancy, which she recorded in the run up to the birth of her third baby this July. What’s been fuelling her through? “I have eaten so many delicious gifts that now I am on a health kick,” she says. “I love doing Mindful Chef about three times a week. But, in the early newborn phase, it was Gower Cottage brownies, and Konditor & Cook Noisette cake. And my mate sent us a care package from Lina Stores that we have finally got through – that was pretty fantastic.”

Have they had time for a mother-daughter trip yet? “We usually go to Greece every year, but because of the last 18 months, I’ve not been able to go,” says Jessie. “Mum went without us this year; I’m desperate to get back there.” Next, Lennie has her sights set on LA: “I’ve not been able to travel to the U.S. to meet my other daughter, Hannah, so now that I’m allowed, I’ll be going over to Los Angeles.”

They share memories of trips to the Maldives, Japan, Bali, San Francisco, Berlin, Paris, and around the UK – “The Newt has probably the best pool and spa I have been to (you get a plum sorbet after a treatment!), definitely worth a visit. I also always feel completely at home at The Pig, whichever one we are in,” says Jessie. But ultimately, it all comes down to being in each other's company. “Give us a deck chair, some sun, and get mum a nice cold drink, and we are happy.”

Meanwhile, they’ve been busy recording season four of Table Manners, which kicks off on October 13. “It’s going to be our biggest and best series yet,” they promise. “It’s so nice to be able to do it properly at mum’s again – with actual food!” Here’s hoping there’s bagels.

Jessie and Lennie Ware have partnered with the British Airways American Express® Premium Plus Card to celebrate the Companion Voucher benefit, which could entitle you to a second seat for a companion when making a Reward Flight booking. For more information, search BA Amex.

More like this
Courteney Cox & Laura Dern Proved Their BFF Status With Matching Tattoos
By El Hunt
Spencer Matthews’ Impressive Net Worth Expands Far Beyond Chelsea
By Sam Ramsden
Con O'Neill Was Connected With Sarah Lancashire Long Before 'Happy Valley'
By El Hunt
Twitter Can’t Get Over This One Part Of Lily Allen & David Harbour’s House
By El Hunt
Get The Very Best Of Bustle/UK
Sign up for Bustle UK's twice-weekly newsletter, featuring the latest must-watch TV, moving personal stories, and expert advice on the hottest viral buys.