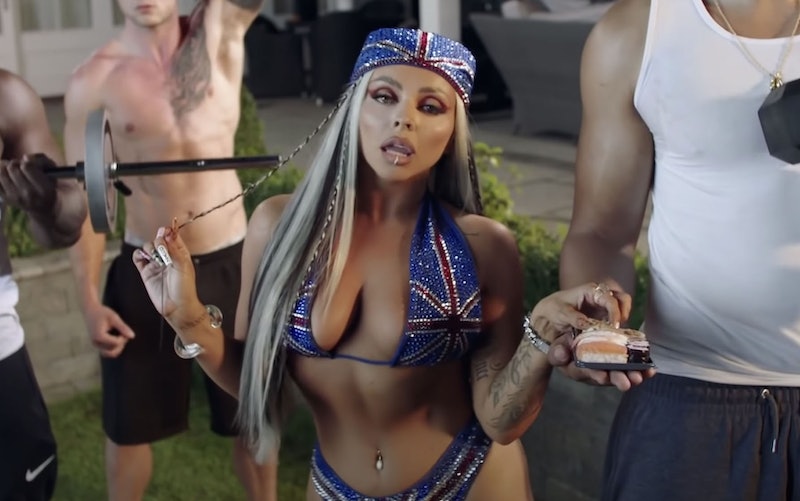 After months of hints, Jesy Nelson re-entered the spotlight as a solo artist with her first single “Boyz” featuring rapper Nicki Minaj (as well as a star cameo from P Diddy) in early October. The Pop-R&B single (in which Nelson sings about loving “hood” boys over a sampled hip-hop beat) soon catapulted to number one on the UK charts, but the former Little Mix-er’s big-budget music release was quickly overshadowed by an ongoing blackfishing controversy, with Nelson repeatedly pushed to address her “racially ambiguous” image.

While the singer stressed via an interview with Vulture on October 8 that she would “never intentionally” try to appear Black or mixed-race, the backlash has reached a fever pitch online, with commenters divided as to whether the singer is indeed perpetuating harm through her image or being subjected to another unfair social media pile-on.

As Nelson promotes her first solo single with live performances and press tours, she has struggled to distance herself from the Blackfishing controversy, with the singer’s ongoing style choices further stoking the fire.

But how did we get here? And what exactly is Nelson being accused of? Here’s an overview of the Nelson blackfishing debate, including when they started and what’s happening now.

The Jesy Nelson blackfishing accusations are by no means new, with the singer finding herself at the centre of the blackfishing debate as far back as May when, as The Tab reports, tweets “began gaining traction” from people who were only just learning that she was a white woman and not Black or mixed-race like her former Little Mix bandmates Leigh-Anne Pinnock and Jade Thirwall.

At the time, a now-deleted Buzzfeed community article entitled “Dear Little Mix Fans, We Need To Hold Jesy Nelson Accountable” added fuel to the fire by analysing Nelson’s changing appearance and detailing why blackfishing is a harmful trend. (When asked about the removal of this post, a representative at Buzzfeed told Bustle, “This piece was removed as it did not meet our community standards.”)

In the lead up to the release of Nelson’s new music, the controversy began to gather up steam once again when Guardian journalist Simon Hattenstone sat down with the star to discuss her shock decision to leave Little Mix in December 2020 as well the relentless social media trolling Nelson experienced during her time in the girl band.

Somewhat tentatively, Hattenstone asked the 30-year-old performer whether she still read negative comments online, including the ones accusing her of blackfishing. While Nelson responded that she wasn’t “aware” of the comments (she has since said her management were blocking and deleting them), the interview re-surfaced accusations that the singer was intentionally making herself appear Black or racially ambiguous by way of excessive tanning and appropriating Black hair, makeup, and clothing styles.

Despite the discussion being ongoing, it was the release of the “Boyz” music video on October 8 that really pushed things into overdrive. Twitter was flooded with comments where viewers questioned the singer’s appearance and the aesthetic choices within the video, as well as the song’s lyrics. For some critics, the video only served to strengthen their blackfishing claims.

As mentioned, Nelson initially said she was unaware of the blackfishing claims online, stating during her Guardian interview: “I would never want to offend anyone, and that was really upsetting. I wasn’t aware that’s how people felt.”

Two months later, in an interview with Vulture, Nelson addressed the blackfishing allegations again, stressing that she had a love for Black music and Black culture. “That’s all I know; it’s what I grew up on,” she said. “I’m very aware that I’m a white British woman; I’ve never said that I wasn’t.”

In a follow-up email to Vulture, Nelson added that she “would never intentionally do anything to make [herself] look racially ambiguous.”

Despite this, Nelson’s image has continued to ignite discussion among critics, most recently when she was photographed wearing a logo jacket by black-owned brand Market Black at the Capital Jingle Bell Ball on Dec. 11. In the images, which she posted and later deleted on Instagram, her hair covers the word “Market” to simply read “Black.” For some commentators on Twitter, the incident proved she was not taking the Blackfishing accusations seriously, with further accusations that the singer was “intentionally” trying to cause upset. Others urged Nelson “to have a look at the team around her and put some of them in the firing line.”

Still, Nelson’s team have insisted that the jacket was an unfortunate blunder, with a source telling The Sun, “She had no idea, when her hair was pulled over one shoulder on the red carpet, that it was covering the start of the logo.”

What Happened On The Instagram Live With Nicki Minaj?

On October 11, Nelson took part in an Instagram Live with Minaj, who decided to address the blackfishing accusations and discuss a string of alleged messages sent by Leigh-Anne Pinnock to an influencer called nohun_.

Speaking to their 100K viewers, Minaj defended Nelson, saying “There’s a lot of women out here in the United States that tan, get bigger lips, get all types of s*** done to themselves. I wear straight blonde hair down to my feet when I want to, contacts… whatever. I do whatever the f*** I want. As long as you’re not hurting anybody or speaking negatively about anyone’s race or culture, you should be able to enjoy your body, your make-up, how you want to.”

Minaj went on to indirectly address Pinnock, calling her a “jealous bozo” among other insults.

Later, Nelson told Minaj, “I was in a group with two women of colour for nine years and it was never brought up to me up until the last music video that I did with them.”

You can read full details about their conversation here.

It’s safe to say that there are obvious tensions between Jesy Nelson and her former bandmates, with Nelson admitting that they are “not talking anymore” on the Graham Norton Show last month before adding that there is “no bad blood” as far as she’s concerned.

Despite the drama, Little Mix had remained silent on the controversy until recently, stressing in a new interview that they “really don’t want to dwell” because they “have so much to celebrate as a three.”

“Capitalising on aspects of blackness without having to endure the daily realities of the black experience is problematic and harmful to people of colour,” Thirlwall explained. “‘We think it’s absolutely not OK to use harmful stereotypes. There’s so much to say on that subject that it’s hard to sum up in a sound bite.”

Thirwall went on to say that the group had in fact spoken to Nelson about blackfishing before she left the group. “We’ve dealt with it in the best way that we know how, and got each other through it. We don’t want to talk about the video, or be critical, but one thing we will clarify regarding the blackfishing situation is that Jesy was approached by the group in a very friendly, educational manner,” she told the Telegraph. “This conversation, in fact, took place before Jesy even left the band.”

Nelson has often spoken about the breaking point that led her to leave Little Mix. It followed years of scrutiny over what she looked like and affected her mental health in a major way. Naturally, as a result, commentators are keen to approach any subjects involving her appearance with caution. However, while this fact makes the conversation more complex, it is no reason to ignore it all together.

Nelson is by no means the only celebrity or influencer to be called out for blackfishing in recent times, with everyone from the Kardashians, Iggy Azalea, Rita Ora, Ariana Grande and Justin Bieber facing backlash for attempting to appear more “ethnically ambiguous.” Yet, despite the fact that it’s a topic often in the public eye, not everyone understands why blackfishing is an issue.

Blackfishing is a relatively new term coined by journalist Wanna Thompson, referring to incidents in which white people alter their appearance with filters, makeup, and even cosmetic surgery to resemble those of Black or mixed-race people. The phenomenon has also been further clarified as “mixed-fishing” which, as Metro journalist Natalie Morris explains, is a person specifically attempting to replicate a “mixed aesthetic” because it is often “pedestalised” for being “more beautiful.” Other terms such as “ethnic smudging” have been used to define this harmful trend.

It stems from a wider issue of cultural appropriation, which occurs when certain defining aspects of a minority group are taken and used elsewhere (often incorrectly and without credit to its originators). Modern examples range from Native American headdresses worn at music festivals to Black creators on TikTok demanding credit for their viral dances.

Blackfishing is a phenomenon with an impact that goes beyond people simply wearing a deeper shade of tan. Like blackface, blackfishing sees Black features treated as a fashion trend, a costume, or a commodity, alienating those who actually are born with Black features.

For Black women and mixed-raced women in particular — whose appearance is often scrutinised and politicised at work, school, in the media, and elsewhere — it can feel strange and harmful to watch celebrities profit from the very things they have been penalised for without having to deal with the realities of Blackness.

Editor’s note: This article is being continually updated to reflect the ongoing conversation around Jesy Nelson and blackfishing.